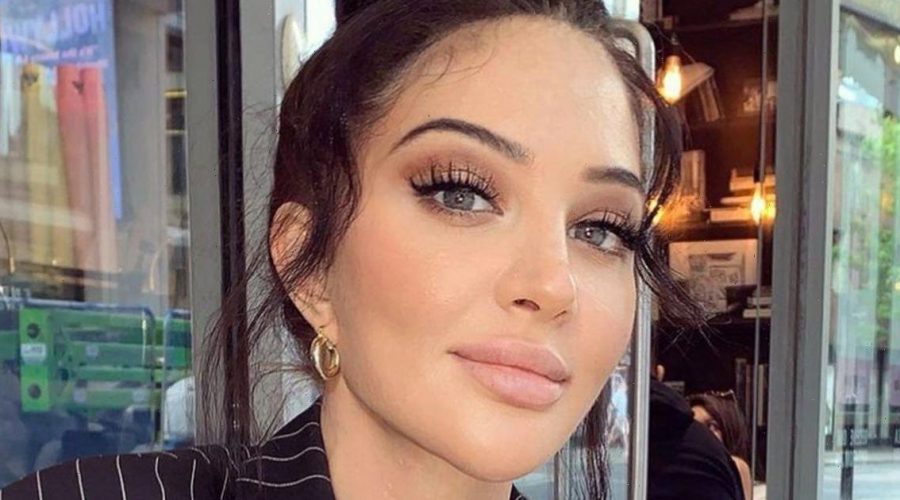 Cast your mind back to the mid noughties and you may remember a certain group called N-Dubz dominating the mainstream airwaves. If ever you wanted to see the trio live but missed your chance during their heyday, you were probably delighted by the recent news that the band is getting back together for a tour later this year, as well as releasing new music.

If you’ve ever wondered what the group’s leading lady Tulisa Contostavlos is up to these days, then wonder no more, as she’s just made her return to social media with several Instagram posts in honour of the group’s brand new song “Charmer”.

In a series of different snaps the 33 year old can be seen sporting lengthy brunette hair that’s so long it could easily rival Rapunzel’s, offset with Greek goddess-like gold leaf hair accessories and spray painted gold lettering. And while fans may remember that Tulisa has dabbled in blonde hair in the past, it seems she’s very much sticking with the brunette looks for now.

Tulisa’s hair stylist Carl Bembridge – who also regularly styles the manes of Molly-Mae Hague, Maura Higgins and Jacqueline Jossa, to name but a few – also shared some further insight into the star’s lengthy hairstyle with fans.

“When Tulisa got in touch and spoke about this vision she had, we really did bring it to life,” he captioned his own Instagram grid post. “She wanted GREEK EMPRESS vibes, so me being me [I] wanted to add that extra bit more.”

He continued: “I added Greek matrix lettering onto her hair in a gold metallic finish. I even wrote the words NA NA NI can you spot them!?” We absolutely love this attention to detail.

If you’re sitting here wishing your hair was as shiny as Tulisa’s, fear not, as Carl also shared a couple of the products he used to create her dazzlingly shiny blow dry, namely ColorWow’s Dream Coat Spray and Extra Mist-ical Shine Spray, both £26 here and here.

Extra long hair that gives off a nineties supermodel is having something of a moment among the celeb crowd at the moment, with everyone from Kendall Jenner to Tulisa’s very own X Factor mentee Little Mix’s Jade Thirlwall getting in on the action.

BRB, we’re off to look into getting our own supermodel hair extensions.

For all the latest celebrity news including Love Islanders past and present, sign up to the OK! daily newsletters now