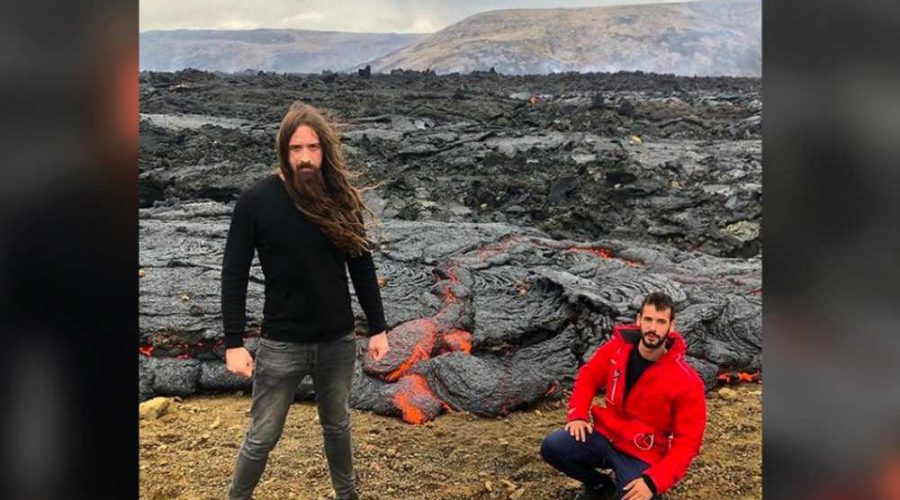 It was out of nature’s frying pan — and into the social media fire.

Despite multiple stern warnings from experts, clout-chasing tourists continue to risk their lives to get spectacular volcano footage and selfies in Iceland. The most recent instance saw several bozos grilling food on still-molten magma — and washing it down with soft drinks, Newsflash reported.

The searingly stupid stunt comes amid a scandal last month, in which a volcano-monitoring webcam recorded a man standing in front of an advancing river of lava on an active crater in the Geldingadalur Valley. The eruption, sparked after a series of earthquakes in the area, was the peninsula’s first volcanic explosion after lying dormant 781 years, per the Associated Press.

The reckless chucklehead, named Vincent Van Reynolds, has since announced his identity in a Facebook group called Volcanoes, the Reykjavik Grapevine reported.

“Hello everyone. I am that crazy man from the Iceland news who went up the cone, only to run down when a torrent of lava was unleashed. Pile on the hate!”

Unfortunately, the foolhardy feat wasn’t a one-off. Reynolds, who hails from Denver, Colorado, has uploaded multiple POV videos on Facebook of himself screaming profanities as molten magma cascades down the caldera towards him a la “Lord of the Rings.” The thrillseeker also posted selfies of himself posing before the wall of lava.

Suffice it to say, people were none too pleased with the daredevil’s smoldering photo op.

“I was told by rescue workers not to do this,” Reynolds told local media outlet Visir. Meanwhile, critics on social media deemed his antics both dangerous and “disrespectful.”

“Some people say I wish I was dead or that I’m the biggest fool in the world,” said the volcano voyeur, adding that some detractors had told him to leave the country and never return.

However, Reynolds, who has a bachelor’s degree in geology, claims that his stunt was not as perilous as it may have appeared.

“I have a lot of experience in this field and it suited me well where I stepped and where the lava would flow,” he said. “I was actually in rather little danger. I know what it looks like.”

Unfortunately, the visible magma isn’t the only danger. Experts have warned that despite the formation of a crust, molten lava — which can reach over 2,000 degrees Fahrenheit — is still flowing underneath, presenting a major risk to anyone walking on the surface.