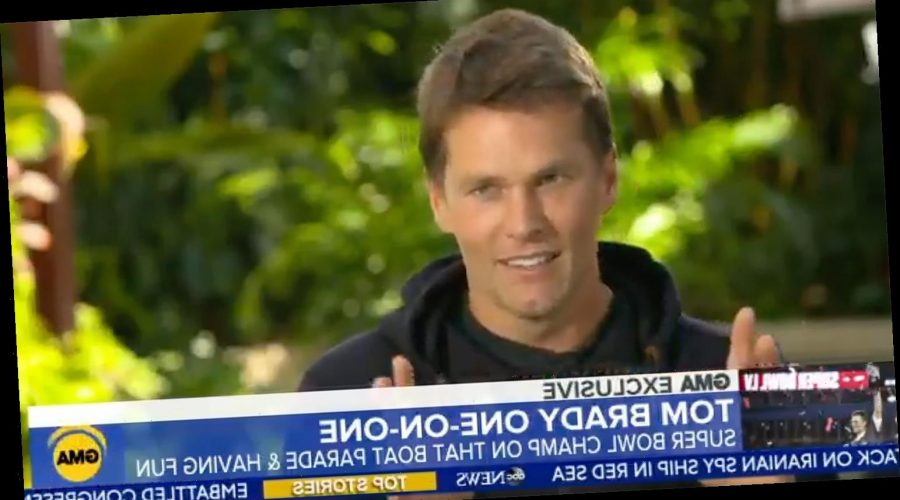 Tom Brady is speaking candidly about his antics while celebrating his seventh Super Bowl win back in February.

While appearing on Good Morning America Wednesday, the 43-year-old Tampa Bay Buccaneers quarterback opened up about tossing the coveted Lombardi Trophy from one boat to another during a waterway victory parade that took place on the Hillsborough River in downtown Tampa, Florida, following the 2021 Super Bowl.

When asked by GMA co-host Michael Strahan about his thought process before the throw, Brady said, "There was not a lot going through my mind at that point."

"That was not smart for a couple of reasons," he continued. "One is if we drop it, that's a little bit of a problem."

"But the worst thing that could happen is the edges on that trophy are so sharp and had those things clipped one of my boys on the other boat, it would have been an ugly, ugly parade," he added.

After the Buccaneers beat the Kansas City Chiefs at Raymond James Stadium to win Super Bowl LV, the Florida team celebrated on boats in a waterway parade instead of the traditional winners' parade due to the ongoing COVID-19 pandemic.

Players including Brady — who was joined by his kids — and Rob Gronkowski rode on various watercraft around the harbor area, clad in the team's signature bright red and white. During his time with GMA, Brady admitted to Strahan, 49, of the celebrations, "I had a lot of fun and I don't get to do that."

"It's hard to relax and when you're out in public, and there's phones — not that I would do anything — but it still doesn't feel like comfortable for me, my personality, to have people filming," he said. "So I tend to just stay at home more and I don't go out a lot."

In his GMA sit-down, Brady also spoke about his wife, Gisele Bündchen, and credited the supermodel with keeping their marriage strong.

"I give her a lot of credit for that," said Brady, who shares two kids with Bündchen, 40 — son Benjamin Rein, 11, and daughter Vivian Lake, 8. (He is also dad to 13-year-old son John "Jack" Edward with ex Bridget Moynahan.)

"She's the one that, you know, supports the family and, at the end of the day, makes a lot of sacrifices," he added. "She brings out the best version of me."

Brady also spoke about keeping his children "grounded" as they grow up, making sure that they know they'll have to "work hard" in life.