TMZ reports that the 16-year-old, who is the most-followed star on TikTok , with 75.1 million followers, was threatened on social media by a user who said they were going to turn up at her family’s house in Norwalk, Connecticut.

Her family contacted law enforcement, and are reportedly paying overtime for police to be stationed outside their property. 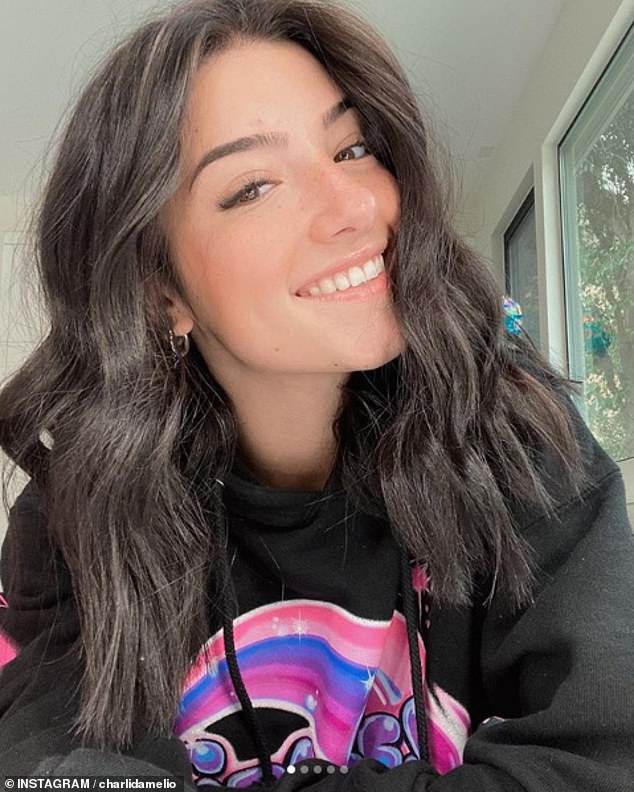 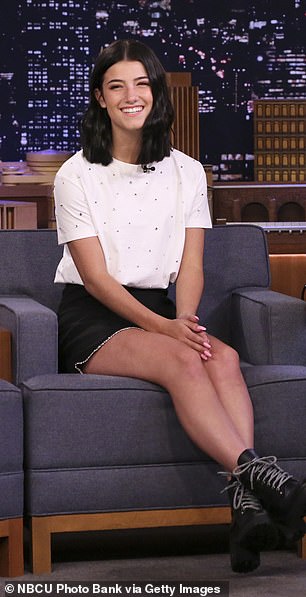 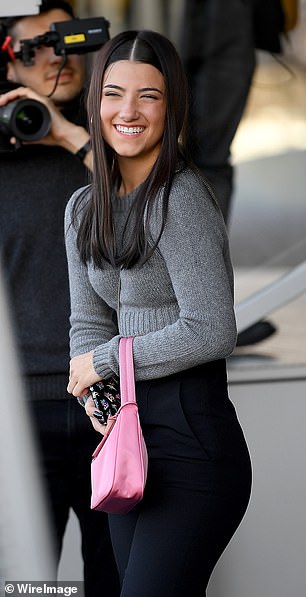 TMZ reports that the 16-year-old, who has 75.1 million followers on TikTok, was threatened on social media by a user who said they’d come to her family’s house in Norwalk, Connecticut 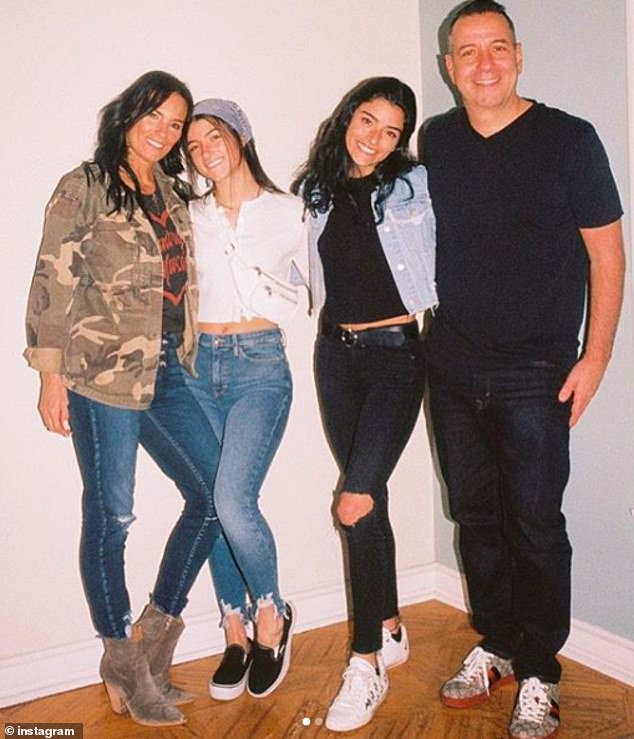 Staying safe: Charli is pictured with her sister Dixie and her parents Marc and Heidi – all of whom have earned celebrity status online

The July 8 threat may have been online posturing, since no one has followed through — but it was enough to scare Charli’s parents into action.

According to sources who spoke to TMZ, Charli has also received several ‘swatting’ calls, in which people falsely report an emergency at her home to police.

The family spent a few weeks in Los Angeles from the end of June until mid-July and it is not known whether they were home in Connecticut when the threats were made – however, Charli has since been uploading videos from her Norwalk bedroom, suggesting that they are back in the property.

And it’s not just Charli who has earned celebrity status on the app; the rest of her family boast millions of followers of their own.

Charli’s older sister Dixie, 18, has 31.9 million followers on the social media app, and even the teens’ parents have huge followings: Mom Heidi has five million TikTok fans, and dad Marc has 6.2 million.

This has led to some lucrative sponsorships for Charli and Dixie, who have partnered with Hollister and makeup brand Morphe in the last few months alone.

Earlier this year, Charli became the first TikTok star to land a Super Bowl commercial when she appeared in an ad for Sabra Hummus.

As for getting paid for social media content, the teenager reportedly charges up to $100,000 per post, according to Cosmopolitan.

Alessandro Bogliari, TikTok expert and CEO of The Influencer Marketing Factory, told DailyMail.com: ‘This is just the early era for TikTok and there is not a real pricing model for influencers yet, but in general someone with five million followers could make up to $1,500 for a single video asset, depending on their location and some other factors.

Charli was also able to charge $100 for fans to come to a meet-and-greet last winter.

In November of that year, she performed onstage at Barclays Center in Brooklyn with Bebe Rexha, who opened for the Jonas Brothers. 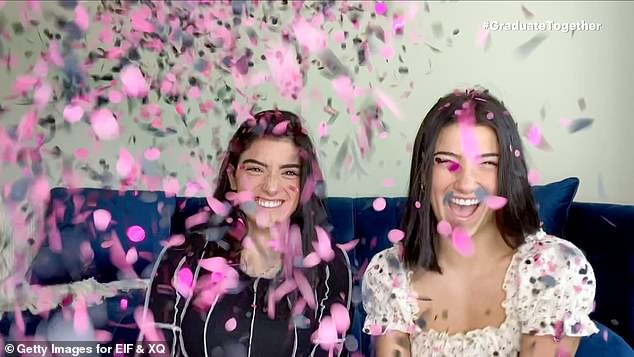 According to sources who spoke to TMZ, Charli has also received several ‘swatting’ calls, in which people falsely report an emergency at her home to police 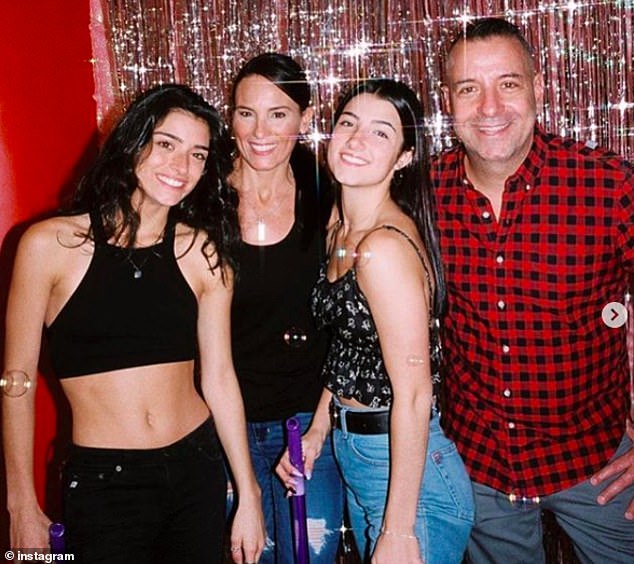 Viral: Even the teens’ parents have huge followings: Mom Heidi has five million TikTok fans, and dad Marc has 6.2 million 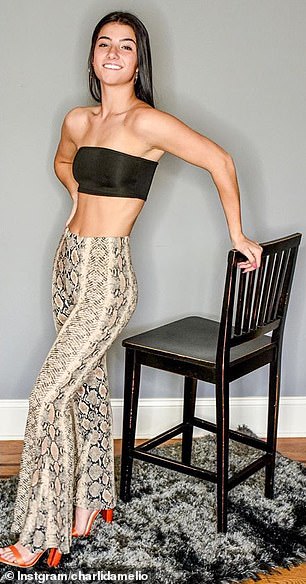 Tough: Charli admitted that her sudden attention was taking some getting used to

Charli has only been on TikTok since June 2019, and has managed to amass one of the biggest fanbases on the apps in that time.

Speaking to MEL Magazine in her first published interview last year, Charli spoke about her online fame, admitting that the sudden attention was taking some getting used to.

‘It’s very weird, especially like when it’s [from] older people,’ she confessed. ‘Both girls and guys commenting on a 15-year-old’s appearance and her body shape and how she looks.’

And, as is to be expected, the sudden glare of the spotlight that has come from being something of an accidental overnight celebrity is quite the double-edged sword.

As one of TikTok’s most prominent figures, Charli is often the subject of debates among Gen Zs about whether she’s ‘worth the hype’. 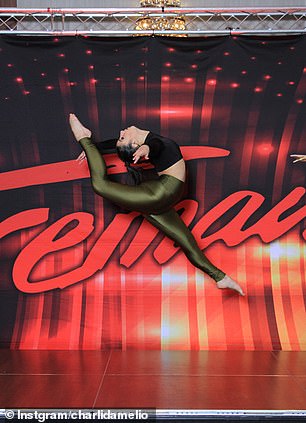 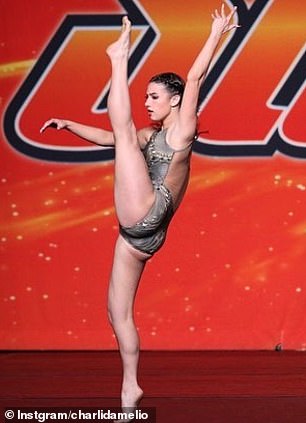 Dancer: While her TikTok routines are relatively simple and off-the-cuff, Charli is an accomplished stage dancer, left and right

Charli told the men’s pop culture magazine that the negativity both online and off has been ‘overwhelming,’  especially in school.

Her classmates record her, catching her off guard, and film her every move to share with each other.

‘It’s the internet,’ she said. ‘Everything gets around, you know. Like, no way I wasn’t going to see that.’

‘I don’t know what else to say about that,’ Charli said of the criticism that her dancing is overrated on TikTok.  ‘I know all my years of training aren’t helping with TikTok dancing, but I know that TikTok dancing is fun.’

07/31/2020 lifestyle Comments Off on TikTok's Charli D'Amelio, 16, hired police to guard home after threat
Recent Posts
We and our partners use cookies on this site to improve our service, perform analytics, personalize advertising, measure advertising performance, and remember website preferences.Ok