Is TEN too young to date? Mothers get into heated debate on This Morning after Nandos asked a young boy and his ‘girlfriend’ to leave because they were underage

Two mothers got into a heated debate on This Morning over whether children of primary school age are too young to date.

Journalist and mother-of-one Nilufer Atik said she was horrified at the idea of two young children left without adult supervision, claiming that dating is only ‘to forge romantic relationships or to have sex’.

Fellow broadcaster Julia Hartley-Brewer insisted there was nothing sinister about it, saying that it could help children to develop communication skills and relationships.

The debate follows news of a ten-year-old boy who took his ‘girlfriend’ on a date to Nando’s but was asked to leave the restaurant because they were under the required age of 13 to dine without an adult. 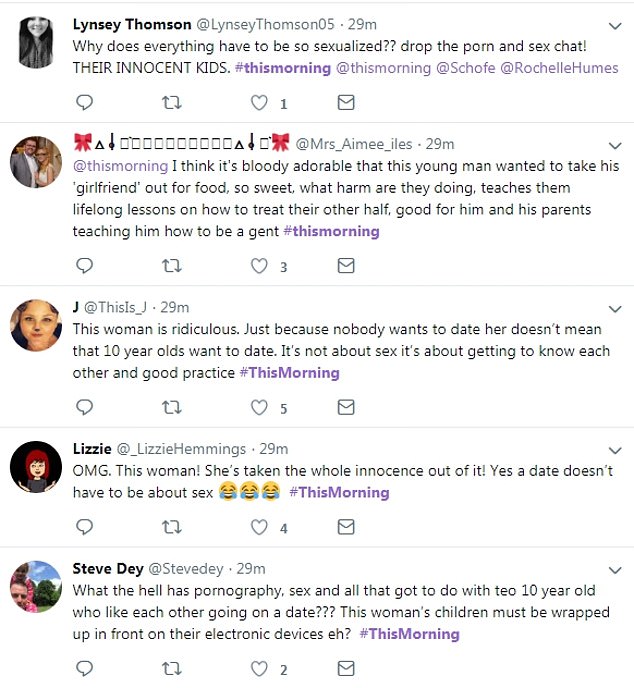 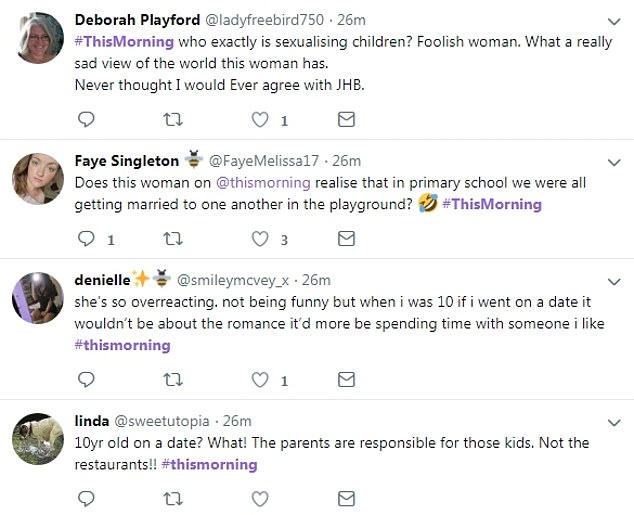 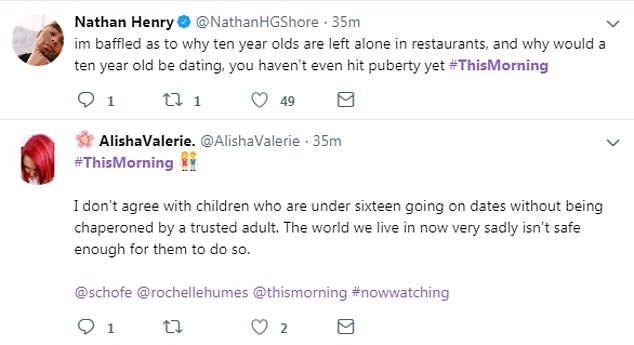 Others agreed that ten years old was too young to go on dates, especially as the two youngsters had been left without adult supervision

‘She’s so overreacting. not being funny but when i was 10 if i went on a date it wouldn’t be about the romance it’d more be spending time with someone i like,’ wrote another.

One tweeted: ‘This woman is ridiculous. Just because nobody wants to date her doesn’t mean that 10 year olds want to date. It’s not about sex it’s about getting to know each other and good practice.’

However, others supported the mother-of-one’s stance with one adding: ’10 is far too young to date. Let children be children! There is plenty of time to date when you are an adult. Why do children feel the need to grow up fast?! Make the most of being young and without any responsibilities!’

‘There is no way in hell I’d let my 10 year old child go to a restaurant with another 10 year old without adult supervision,’ fumed one. 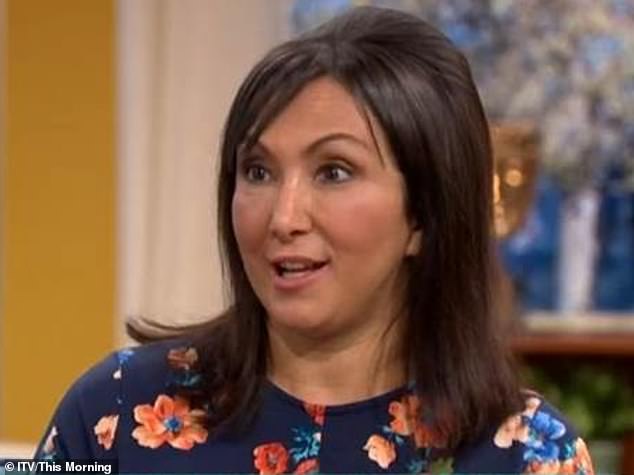 Nilufer claimed that dating was only for adults who wanted to forge a romantic relationship or go on to have sex with each other, and that young children should not be thinking about it yet 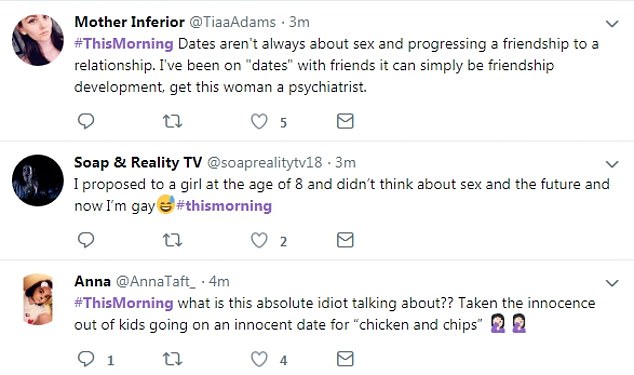 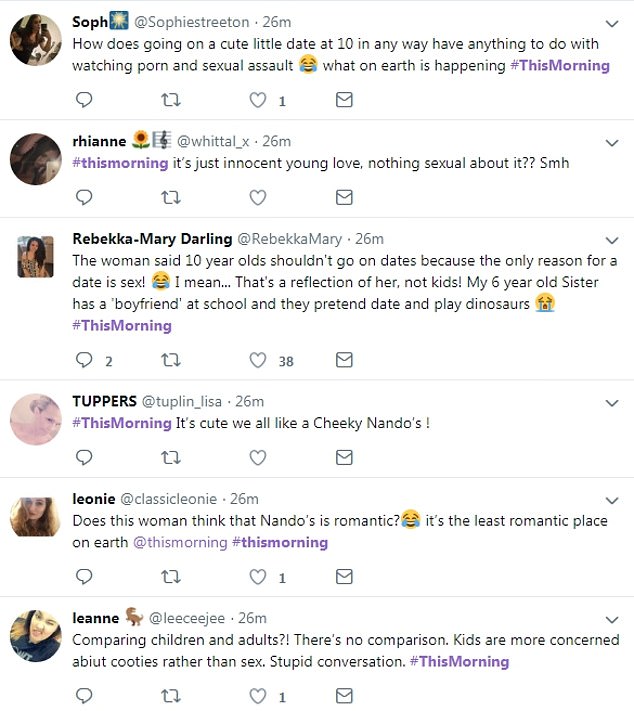 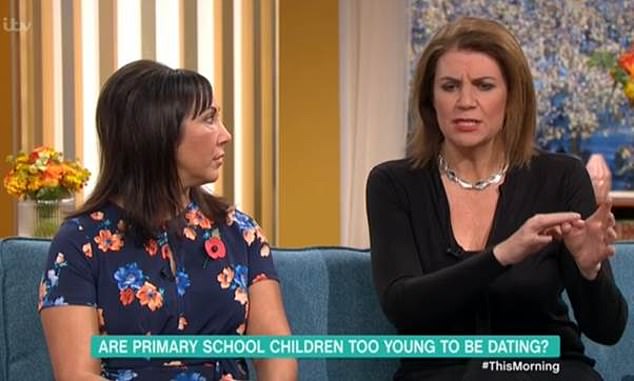 Nilufer said during the debate on ITV: ‘Why would a ten year old want to date? Why do we date? We date because we are attracted to the opposite sex or the same sex, we want to forge a romantic relationship or to have sex.’

‘They date for one of those two reasons they want to take it further than a friendship or they want to have sexual intercourse. At the age of ten that is the last thing they should be thinking about.’

But Julia said that it was ‘sad’ that Nilufer was ‘sexualising’ children and that ‘a date doesn’t have to be about sex, they are just being nice to each other’. 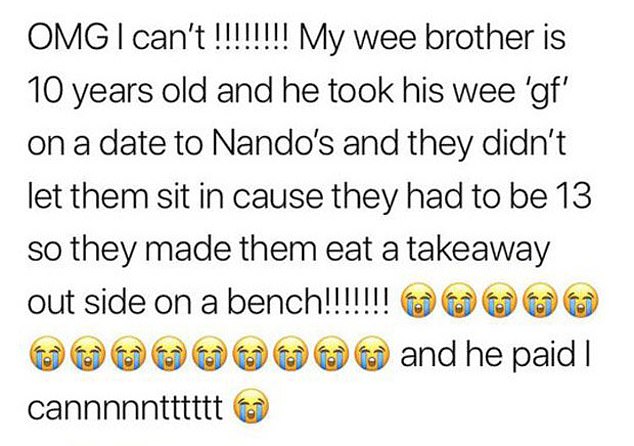 A ten-year-old boy was kicked out of a branch of Nando’s while trying to impress his ‘wee girlfriend’ with some spicy chicken wings and Peri Peri fries, with the story going viral 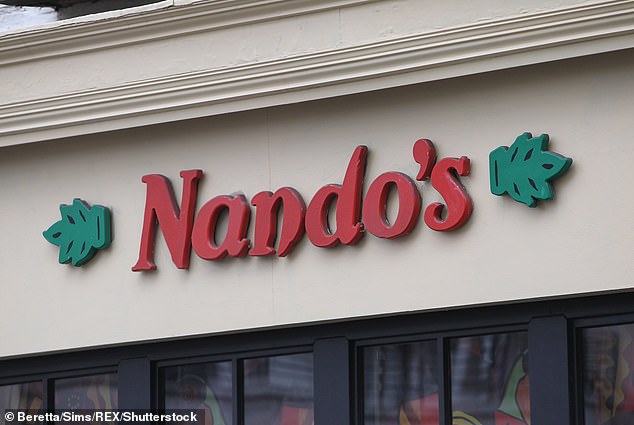 His plight was revealed on Twitter, when his older sister took to the social networking site to shame Nando’s for hindering his romantic overture (file image)

The primary school pupil and his female friend were not allowed to eat alone at the Nando’s branch in Edinburgh, and had been asked to eat outside instead.

Why weren’t the 10-year-old’s allowed to eat at Nandos?

It is unclear what type of licence Nando’s in Edinburgh holds but it is known to have an alcoholic beverage licence which would restrict under 14s from being in the premises unaccompanied.

Pubs were allowed to introduce special ‘children’s certificates’ that would allow 14-year-old’s and younger to be accompanied by an adult in licensed premises.

A children’s certificate permits a person under the age of 14, if accompanied by a person of not less than 18 years of age, to be present in a bar of licensed premises at any time between 11 a.m. and 8 p.m. for the purpose of the consumption of a meal sold or supplied on the premises.

His plight was revealed on Twitter, when his older sister took to the social networking site to shame Nando’s for hindering his romantic overture.

He was made to eat his spicy chicken wings and Peri Peri fries outside on a bench after being told they were not allowed to eat inside the shop.

She also revealed that the youngster even insisted paying for their date.

Nando’s apologised for ‘cramping the little guy’s style’ but confirmed it was a legal requirement with alcohol licence laws in place.

A spokesman said: ‘We know that nobody wants to go on a date with their parents in tow but unfortunately it’s a legal requirement of our alcohol license in Scotland that all under-13’s must be accompanied by an adult.’

This Morning airs weekdays on ITV at 10.30am

11/01/2018 lifestyle Comments Off on This Morning debate: When should children be allowed to date?
Recent Posts