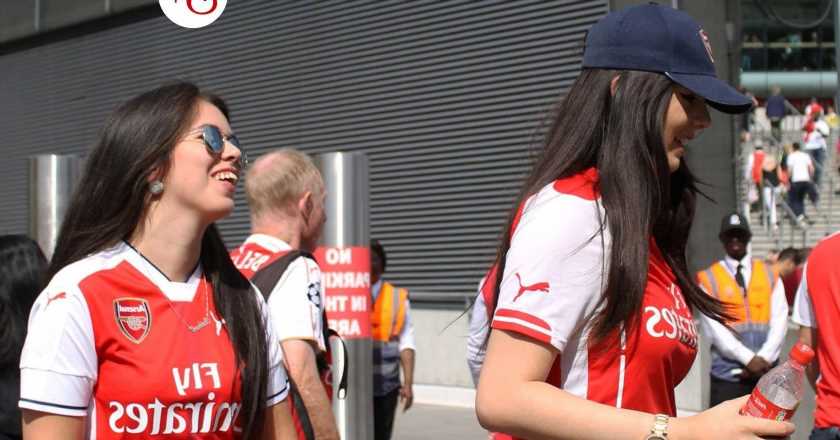 As the hype from England’s win at the UEFA Women’s Euros finals starts to simmer down and we look ahead to the future of women in sport, Stylist revisits a story originally published in June 2018.

When football fever was rife ahead of the FIFA World Cup back in 2018, we spoke to the women behind This Fan Girl to uncover what really makes a female football fan tick. Here’s what they told us.

Like many arenas in life, football has always been considered as belonging to men: it is, after all, a sport that has been historically dominated by male players, male commentators, and male supporters.

Following on from the first FIFA Women’s tournament in 1988, and the subsequent first Female World Cup in 1991, as of 2018 FIFA reported over 29 million women and girls playing football worldwide – and participation is growing rapidly.

The surge of our interest in football is particularly evident at matches, where more women than ever before can be found cheering on their team from the concrete benches, with a 2014 British Council study reporting that a not-insignificant 19% of fans at matches are women.

So just who are these female football fans?

Stylist.co.uk spoke to the founders of This Fan Girl, a project dedicated to celebrating the diversity (and all-round brilliance) of female football supporters, to investigate.

Started by Amy Drucquer and Laura Blake, two 30-year-olds living in London, This Fan Girl kicked off in August 2016 with the goal of changing the general perception of female football fans in England.

“We wanted to repaint the image of the female fan,” Drucquer, who supports Leicester City, says. “The media has one portrayal of female supporters, and from our experience of going to matches it’s not at all reflective.”

“We’ve met so many incredible women, from all sorts of backgrounds, and wanted to shine a light on the diversity which isn’t recognised,” Drucquer adds.

But the project isn’t just about driving forward a more realistic image for the women who enjoy football.

Blake, who supports West Bromwich Albion, adds that the pair felt there wasn’t the same sense of community for female football fans as there was for men: now, they are hoping to stitch together a sense of belonging for women football fans across the UK.

“We want to help build that community for ourselves and our friends and other women just like us,” Blake explains.

Growing the sense of community among women who support football not only helps open up a dialogue around the game: it also shines a light on the friendlier side of football.

And with the England team being threatened with disqualification from previous football matches after its fans were arrested for extreme violence and hooliganism, this is a message that is much needed.

Thankfully, violent scenes at matches in the UK are in overall decline, with football-related arrests falling steadily over the past five years, and this is helping women become “louder, prouder and less apologetic for the fact they like football”. Equally, there has been a drop in sexism at matches, which is helping the cause even further.

“One Palace fan told us about her experiences through the 80s of men chanting obscenities at her, singing for her to get back in the kitchen and so on,” Blake recalls. “That mentality has definitely shifted.”

“Whenever we ask a female fan to get her picture taken when she’s with her dad or brother or partner, you can tell they’re so proud, and just absolutely beaming to share the match experience with that woman.”

Drucquer also highlights how the growing encouragement for younger girls to become involved in football, and sports more generally, is helping shift the perception of women football fans into a more positive sphere – one that is without violence and sexism.

“From a school level, more emphasis and encouragement is being put on young girls to play football,” she says.

“Time and effort is being taken to maximise that interest in football from an early age, and it’s having a ripple effect.”

Of course, the pair also hope This Fan Girl will shine a more positive light on women at football matches, and the responses they’ve had so far are encouraging.

“There’s definitely a sense that it’s for a good cause, and they’re pleased someone is fighting their corner and championing them as a previously unsung demographic of football fan,” Blake says.

“They like the idea that there are other women just like them on the site and they’re in great company on there. There’s nothing sleazy, nothing to sexualise them. It’s a safe and positive space to be represented.”

And what about the men who don’t get photographed?

“We usually get one man per match telling us we’re being sexist,” Drucquer says. “But we can laugh it off”.

Having already spent hours standing among the crowds to snap the fans, the pair are now hoping to continue growing their collection of images both online and on Instagram by covering “all the clubs and corners of the country”, with the central aim of building up a community for female fans.

“By sharing pictures, stories and interpretations, we hope we can encourage even more women to become active supporters of football,” Drucquer adds.

“It’s a well-known phrase, but it’s true – ‘football is nothing without the fans’.”

All images courtesy of This Fan Girl