You get a sense of the speed with which Sheku Kanneh-Mason’s star is ascending when he tells you his days as a music student ended less than 24 hours ago. After performing the final recital for his advanced diploma at London’s Royal Academy of Music the previous night, the 23-year-old British cellist was free to resume his duties as one of the hottest properties in classical music. 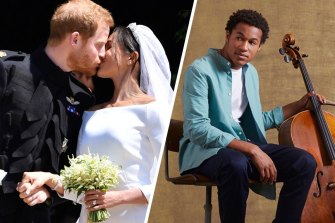 Today, he’s sitting in a corner office at his record company’s headquarters in King’s Cross, ready to talk about a new album and an Australian tour. He’s wearing black jeans and a monochrome Paul Smith shirt with a pattern that, on closer inspection, is made up of hundreds of tiny faces. The elder statesman of British menswear and the young cellist are both Nottingham natives and have become firm friends. Kanneh-Mason wears Paul Smith suits when he performs and has loaned his photogenic face to one of the label’s advertising campaigns.

Even if you don’t recognise the name (it’s pronounced Shey-koo, by the way) you may have heard him play. Kanneh-Mason was handpicked by Meghan Markle to perform at her 2018 wedding to Prince Harry. His renditions of Sicilienne by Maria Von Paradis, Apres un Reve by Faure and Ave Maria by Schubert at Windsor Castle’s St George’s Chapel were seen by a global audience of 1.9 billion people.

The idea of playing at a royal wedding to an audience larger than the population of China might give some people pause for thought. Kanneh-Mason is not one of them. “I wasn’t really aware of the TV audience at the time,” he says in a voice soft enough to make you lean forward. “I was just playing to the people in the room really.”

Did he stick around after the ceremony; was there a right royal knees-up back at the palace? He smiles. “I didn’t stay for long. London was really busy that day, so it took a long time to get home. But it was a fun occasion. They’re a lovely couple.”

The equanimity he displays when describing the biggest gig of his life is something of a recurring theme. Ask him about the pressures he faced in 2016 on the way to becoming the first black musician to win the BBC Young Musician of the Year award and he makes the career-making contest sound like a rafting weekend. “Hmm … I don’t know,” he says. “That competition was a really nice experience. I felt very supported by everyone working on it as well as the other competitors. Of course it was a competition and everyone wanted to win – it’s not all fun and games – but it felt very … supportive.”

Does he get nervous? After all, he’s said he’d like to find a cure for stage fright. “Mmm … for me, it’s not about being afraid of making a mistake,” he says. “It’s more about trying to convey everything to the highest level and in the most intense way. I’m not worried about playing a wrong note, because those kinds of things don’t worry me. I think of performance as fun and enjoyable. The issue is coming away from a concert feeling I’ve said everything that I wanted to say.” 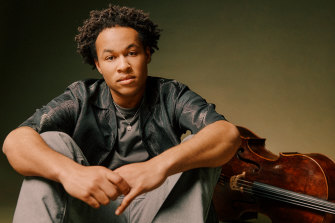 “I wasn’t really aware of the TV audience at the time,” says cellist Sheku Kanneh-Mason of his performance at the royal wedding.

His approach is derived in no small part from his admiration for Jacqueline du Pre, another free-spirited British cellist who achieved fame at a young age. Kanneh-Mason watched videos of her playing over and over again and still seeks inspiration from her work. He describes her style as “the most direct, genuine, honest and creative way of playing I’ve ever seen”.

“It’s very, very special. It feels like there’s no barrier between what she feels and what comes out of the cello. And what she’s feeling is incredibly intense and creative. You can’t imitate her and it wouldn’t be worth trying.”

His relaxed approach to performance extends to his pre-show routine; or rather lack of one. You won’t find a lucky pair of shoes or other talismans in the Kanneh-Mason dressing room. “For me, it’s helpful not to have a ritual because you can’t guarantee you’ll be able to follow it when you’re playing in lots of different places. Of course, I always have some water and some food. And I like to talk to people up until a couple of minutes before the start – I get bored on my own.”

That last sentiment is easy to understand given his upbringing. Kanneh-Mason is the highest-profile member of an extraordinary clan of seven siblings (aged 12 to 25) who each play an instrument with varying degrees of brilliance. Sheku is often accompanied on the piano by his older sister, Isata, while violinist Braimah has interspersed classical work with touring the world with English electronic band, Clean Bandit. The Kanneh-Mason siblings are travelling to Australia for a family tour, featuring works by Schubert, Liszt, Mendelssohn, Shostakovich and Gershwin. 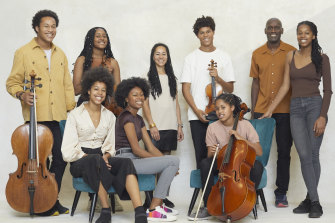 The Kanneh-Mason siblings with their parents; the family members will perform in Australia in August.Credit:Jake Turney

Sheku, the third oldest Kanneh-Mason, often describes his tight-knit family as the “core” that keeps him grounded emotionally as he travels the world with increasing frequency. When I ask if his celebrity has caused any jealousy among his brothers and sisters he looks genuinely puzzled. “Oh, no. It’s never been like that. They’ve all got their own thing and we all learn from each other still.”

The Kanneh-Masons entered the public consciousness in 2015 when the six oldest brothers and sisters performed on Britain’s Got Talent. Simon Cowell, not renowned as a fan of classical music, said, “It’s nice to see you’re happy, because a lot of people are quite miserable when they play this kind of music.” Fortunately, he also called the siblings “the world’s most talented family of musicians” and they advanced to the semi-finals.

In her memoir House of Music: Raising the Kanneh-Masons, Sheku’s mother, Kadiatu, recalls how her children’s choice of Czardas by the Italian composer Vittorio Monti was deemed “too classical” by the show’s producers. The siblings prepared a more palatable medley of classical works in its place. But after rejecting a proposal to play pop music on matching white instruments, their BGT “journey” came to an end.

“We knew what the show was and thought ‘fair enough’,” says Sheku. “It was a fun experience. And useful in the sense of getting to perform on live TV.”

It was, in hindsight, also a powerful showcase for a group of wildly talented black musicians in a genre where they are badly under-represented. A 2013 survey by the British Arts Council found just 5 per cent of professional classical musicians working in Britain identified as Black and Minority Ethnic. More recent studies have revealed a significant lack of representation among composers and the boards of music institutions. (While it’s difficult to find exact figures in Australia, a series of recent reports have highlighted inequalities in leadership positions and funding opportunities.)

Kanneh-Mason, who dedicated a June 2020 rendition of Leonard Cohen’s Hallelujah to families targeted by racism in the aftermath of the murder of George Floyd, understands implicitly his role as a black role model and an agent of change. “There is certainly an expectation of what a classical musician looks like based on what has been,” he says. “I think that’s problematic. Personally, I’ve always had good people around me, and I’ve been able to keep focused, but I know that me being a black classical musician is not something everyone is comfortable with.”

He has clear ideas why there are so few black musicians in British concert halls. “I think it’s a combination of factors and some of the biggest are education and opportunity. They’re really seriously lacking at the moment. It’s almost impossible if you don’t have a lot of spare money to pay for lessons and instruments. Until that changes, I think it’s very difficult to see a significant change occurring.”

The high cost of training and nurturing a professional musician is something the Kanneh-Masons have experienced first-hand. Kadiatu’s book paints a picture of a family struggling and often failing to afford lessons and instruments; a family exhausted by long road trips to recitals in unreliable vehicles. Kanneh-Mason, who began playing the cello at the age of six on a rented quarter-size instrument, knows he’s incredibly fortunate. He recently took delivery of a Matteo Gofriller cello made in 1700 that was bought for his exclusive use by an anonymous syndicate of investors for a seven-figure sum.

TAKE 7: The answers according to Shaku Kanneh-Mason

He becomes animated when describing the venerable instrument. “It’s incredibly rich and has a very strong core to the sound. Even at the high registers there’s a strong support for the sound – it’s never thin or strained.”

Kanneh-Mason plays the Gofriller on his latest album, Song. An eclectic collection of works ranging from the Welsh folk song Myfanwy – a reminder of time spent with his Welsh grandmother – to Elegie for Soprano by Massenet, the bluesy jazz ballad Cry Me A River and Same Boat, an original song co-written with British singer-songwriter Zak Abel. It looks, on the face of it, like an album designed to broaden his appeal beyond a traditional classical audience.

“I think there’s probably something for a wider audience, but it’s basically a selection of things I was thinking about and enjoying and have shaped me to this point,” he says. “They’re very personal choices.”

I ask him if there is repertoire he doesn’t feel ready to tackle yet. What is the cellist’s equivalent of Hamlet, for example? “I think that might be the Bach cello suites,” he says. “I’ve studied them, but not performed them. It’s not that I don’t feel ready to perform them, I just don’t want to yet. I’ve learned a lot from playing them to myself and when I feel I have something I want to say with them, I will. I’m not afraid of them. Of course they’re massive pieces, but they’re also very human and there’s a whole world of emotion there – joy, humour, darkness and tragedy. As soon as you become afraid of a piece of music you lose all of those things.”

Sheku Kanneh-Mason performs at the MSO’s mid-season gala, Hamer Hall, on July 30 and is in conversation with MSO chief conductor Jaime Martin at Iwaki Auditorium on July 27. The Kanneh-Mason family perform in Sydney on August 9 and 11 and Arts Centre Melbourne on August 20.

07/13/2022 lifestyle Comments Off on ‘They’re a lovely couple’: Harry and Meghan’s wedding cellist wowed 1.9b people, then went home to study
Recent Posts