What makes a winning location for buyers? An easy commute, good schools, green spaces, value for money — and, now it seems, food markets.

Homes near a first-rate farmers’ markets offering local produce are in big demand, and can often command a premium.

‘When buyers are looking to move to the country, they tend to want to identify a thriving community. 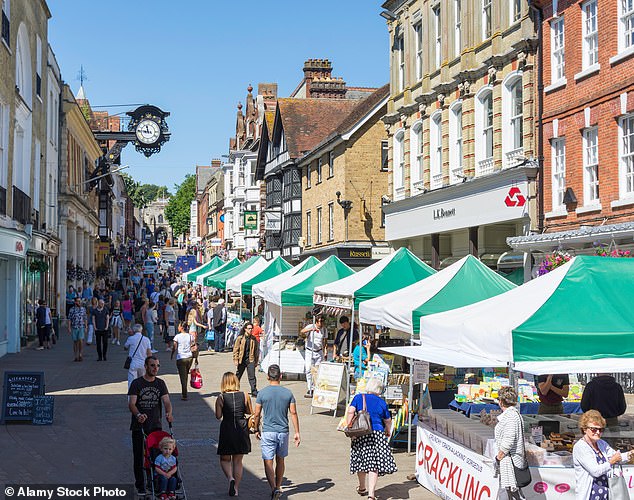 ‘Farmers’ markets are rather like the trend of coffee shops; they attract all ages and are a good place to socialise, while discovering and trying out fresh produce,’ says Jason Corbett of Sotheby’s Realty.

‘Properties that are situated in bustling and pretty villages, even close to the village green, will always attract serious interest.’

A good example is Bath farmers’ market held at the former Green Park railway station, which is believed to be the longest established farmers’ market in the UK, running since 1997.

‘It draws in the big crowds with good old- fashioned fruit and veg stalls, artisan bakeries, cheese stalls and even a wonderful mushroom stall whose vendor has utilised the vaults under the station to grow his amazing variety of mushrooms,’ says Chandra Devadason, of Hamptons.

Garry Manning, 64, has an office on the station concourse at Green Park, and lives in a Grade II-listed townhouse in the Widcombe area of Bath with his wife Sally. 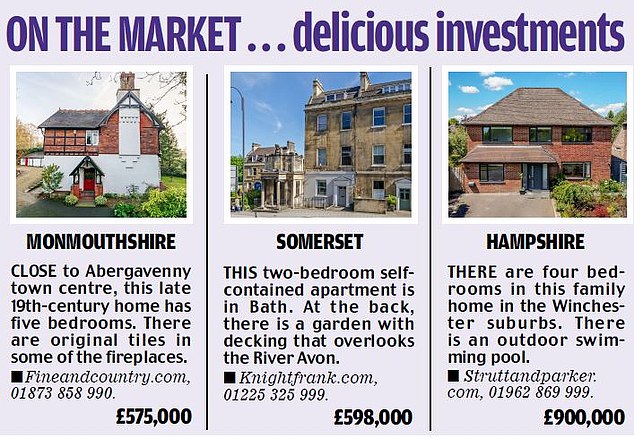 ‘My wife and I go to the farmers’ market every Saturday morning. It has a good buzz about it with a relaxed social feel, so we meet friends for coffee, listen to some live music and go shopping. It has something for every taste,’ he says.

The couple are selling their three-storey four-bedroom home for £1million (hamptons.co.uk).

‘The market certainly adds value and great benefit to those streets around Green Park and up to Queen Square.

According to a recent report by caterer.com, the value of UK street food markets stands at £1.2billion; between 2017 and 2018, it grew 9.1 per cent. And a quarter of us eat at a street food market at least once a month.

Sue and Martin Lockhart, both 64, have visited the market regularly since they moved into their new three-bedroom bungalow at Bee Meadow in South Molton last year.

‘The market has a fantastic atmosphere. We love going there to buy our fresh produce. There’s also a big Christmas nativity show, which features singing and live animals,’ says Sue. Two and three-bedroom bungalows are for sale from £284,995 through Baker Estates (bakerestatesltd.co.uk).

Winchester’s twice-monthly food market is one of the largest farmers’ markets in the UK, attracting people from miles around.

About 10 minutes’ walk from the market is Knights Quarter, a Berkeley Homes’ development of more than 200 one, two and three-bedroom apartments, penthouses and four and five-bedroom homes from £300,000 (knights quarter.co.uk).

And in Abergavenny, there’s a monthly farmers’ market with more than 20 artisan producers. It is also the location of the annual Food Festival, held in September, which attracts celebrities, such as Hugh Fearnley-Whittingstall and Monica Galetti.

‘In terms of being a draw for homebuyers, I would definitely say the Food Festival has bumped Abergavenny up the Most Desirable Towns lists,’ says Joanne Jones, Fine & Country estate agents (fineandcountry.co.uk).

11/16/2019 lifestyle Comments Off on There's never been more appetite for homes close to farmers' markets
Recent Posts
We and our partners use cookies on this site to improve our service, perform analytics, personalize advertising, measure advertising performance, and remember website preferences.Ok