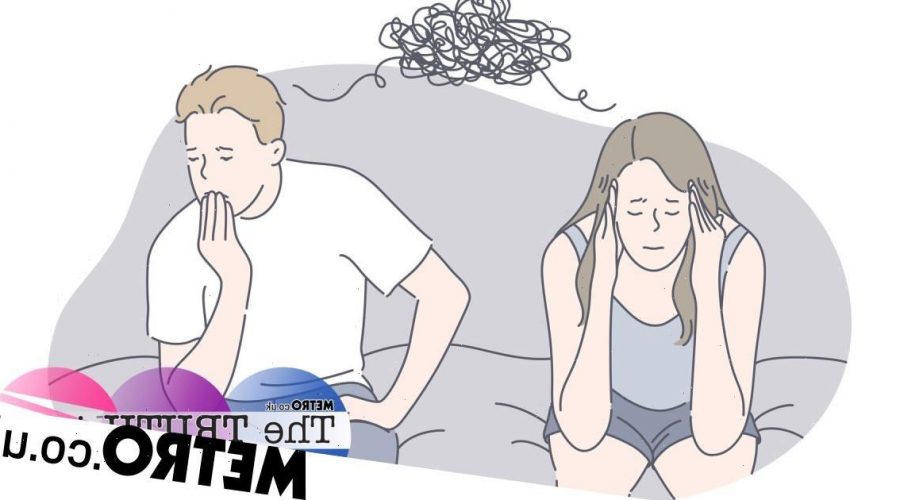 Amid my feverish sorting while moving house, I unearthed an old scrapbook.

The long-forgotten artefact from my teenagehood was bursting with gig tickets and party invites. I reminisced, sorely missing simpler times.

Then, a folded letter fell from the centre. I recognised it instantly. The apology note from the boy who took my virginity and had cheated on me, relentlessly.

It read; ‘…Eight months isn’t bad for your first real arsehole/boyfriend, is it? You could have chosen a bit better, though…’

In the early 2000s, the internet transformed how my friends and I communicated. Living in an isolated village meant this brave new world was not just a novelty, but a lifeline.

One week, Jack* joined our group. He didn’t go to my school, but I recognised him from his MSN picture. We’d been speaking online, he was 15, good looking and had showered me with compliments. I was crushing hard.

Amid the general silliness as we cavorted around the village, Jack grabbed my hand and led me away from everyone. The heavens opened, so we hid amongst some garages. He told me I was beautiful and kissed me. I was 13.

It wasn’t long before we were hanging out alone and our relationship began, much to the dismay of my friends who warned me about him. He’d hit a girl at his school. I wouldn’t have believed it, except he’d done it in front of the entire class. But I gave him the benefit of the doubt because I loved him and wanted to believe he was remorseful.

Our social group distanced themselves from him and soon, in turn, me.

Looking back, it’s easy to see how things escalated. I was eager to find independence and, since being ostracised, my eagerness to grow up was manipulated into something else.

It began with heavy petting. When we were alone he would become forceful, persistent and coercive. Within days of me turning 14, him by then 16, we were having full sex.

Jack cheated on me mercilessly, which my friends and sometimes even strangers told me about

During the eight months we were together, things went from bad to worse. My mum found out and was devastated. Her screaming still rings in my ears today.

‘It’s just wrong,’ she’d repeated, over and over.

I’d felt ashamed, but I was defiant, too. I didn’t want to admit that things had moved too quickly.

It was easier for me to lean on my Disney-level knowledge of relationships. And so, I told my mum that I wasn’t a child. I was in love.

Jack cheated on me mercilessly, which my friends and sometimes even strangers told me about. I’d cried, fraught, not knowing what to do with the betrayal I felt.

Jack was drunk when I confronted him. There was no getting through to him, then or ever.

Then, he began bragging about his virgin conquests to our old friendship group. I felt parts of myself – the bubbly, energetic and happy bits – fall away. I’d been one of those virgins.

I would look at myself in the mirror, poking and prodding at my body, wondering what was wrong with me. I felt ashamed, and blamed myself for not being enough – whatever enough was.

It broke my heart. My self-esteem was chipped away and I became bulimic.

We didn’t fight, we barely spoke about it. What was the point when it was a known fact between us – and everyone we knew – that he cheated and I stayed.

Until things finally came to a head, a friend showed me a video of him giving oral sex to someone at a house party. I couldn’t look away any longer. The proof was there, staring me in the face. I lost it.

He tried to emotionally manipulate me, even threatened suicide. But, unwilling to be humiliated any longer, I ended things.

After the split, I felt free but emotionally scarred. So much happened that I wasn’t equipped to deal with at that age.

As I held the letter in my hand, simmering anger reared its ugly head. I was 14 again. His words in the letter were poisonous – bitter and toxic.

Livid, I took a photo of it and posted it to social media. It felt cathartic. I was careful to keep names out of my passive-aggressive move because even though I was riddled with rage I was frightened of confrontation.

Then, something unexpected happened. Two messages dropped into my inbox, within minutes. I knew the senders well – they were girls Jack had cheated on me with.

‘Did Jack write that?’ they both asked.

I replied and we shared stories. We were all still harbouring self-hatred and blame for one another. But, funnily enough, none for Jack.

I had followed a cycle of self blame for years

Even as adults, we three women were stricken with unresolved guilt. We were able to fill in some of the gaps, uncover the lies and realise, even though this may seem blatantly obvious, that not a single one of us was to blame for the emotional and physical trauma we suffered as young teenagers. He was.

One spoke to me about how it had affected her dating history and I found myself spilling my deepest secrets to a woman I’d previously held at arm’s length.

We recognised how our experiences with Jack impacted our lives, beyond the short period he’d spent with us. We spoke of how it had skewed our views of men and of ourselves. We had been setting the bar painfully low as a result of his conduct.

I had followed a cycle of self blame for years, falling for men who seemed hell bent on cheating, hurting and ghosting. This ended in a crescendo of relationships marred with physical and sexual abuse.

As I exchanged deeply personal stories of sexual assault with these two women – by Jack and the partners who followed in his footsteps – relief washed over me. I’d found the forgiveness that I didn’t know I needed, and I’m not ashamed to say I cried.

My biggest takeaway was that we should question men who say their exes are ‘crazy’, because from my experience – they’re not. They’re hurt, often without all the pieces of the puzzle to make sense of what’s happened between them.

I also realise that women blaming each other instead of their cheating partner is not only counterproductive but causes serious and long-lasting damage to our self-worth.

Plus, viewing other women as the ‘enemy’ feeds into a patriarchal narrative that toxic and abusive men want women to believe. That we’re nuts, drive them to it and are to blame for what befalls us.

Ultimately, if someone cheats on you – male or female – it’s never your fault.

Although I don’t think I’ll ever be able to forgive Jack for setting me on a path of hard knocks, I’m glad to have shared my ordeal with his other exes.

Frankly, the time spent deprogramming the gaslighting has done more for me than a year’s worth of therapy. I’m free of self-loathing over it.

I don’t know why I kept the letter, but I’ve not chucked it away yet. It’s become a totem of some kind, proof that I’ve always been in survival mode in relationships. On edge, waiting for the worst to happen and ready to react when it does.

A 2019 study conducted by The British Medical Journal found that people who experience first sex before sexual competency are most likely to continue to have adverse sexual circumstances. It happened to me and, knowing this now and seeing the pattern that ensued afterwards, well… Hindsight is 20-20, isn’t it?

If I could meet myself at 14, I’d say: ‘you do not need this boy to validate you, to make you feel special, to show you how clever, bright and gorgeous you are. All you need for that is you. Dump him, hun.’

After Jack and the slew of failed, toxic and abusive relationships that followed, I knew I wanted happiness, joy, family and a partner that built me up, not tore me down.

Now nearly two decades since leaving Jack, I’ve managed to find myself in a happy and healthy relationship.

Getting to that point hasn’t come easy. It’s come from learning my worth, which in and of itself is a gargantuan undertaking for someone who has experienced abusive behaviours from day dot.

I’ve had to learn about the nuances of abuse and call it out the moment I spot it. It takes courage, and I’m proud of how far I’ve come.

Now I know that the truth is that when you’re in an abusive or toxic relationship, the only thing you should do is leave. There is always something better out there. Always. Even if it’s simply a chance to find yourself.

*Jack is a false name.

Metro.co.uk’s weekly The Truth Is… series seeks to explore anything and everything when it comes to life’s unspoken truths and long-held secrets. Contributors will challenge popular misconceptions on a topic close to their hearts, confess to a deeply personal secret, or reveal their wisdom from experience – good and bad – when it comes to romance or family relationships.

08/28/2021 lifestyle Comments Off on The women my ex cheated with helped me realise that he was to blame, not me
Recent Posts