The royal gang’s all here, and this time, they’re actually reminding us of the average, non-royal clan. (AKA, ourselves.) On Tuesday, the Prince Charles’ Clarence House shared the new royal family portraits in celebration of his 70th birthday. The photos include Prince William, Kate Middleton, their children, Prince Harry, Meghan Markle, and of course, Prince Charles and his wife, Camilla. Aside from the location, attire, and pretty much everything about the photos, there is one aspect that makes them pretty relatable.

The happy family is pictured in the garden of Clarence House, all effortlessly wearing combinations of white and navy. Standing beside her husband, Duchess of Cambridge Kate Middleton is holding her six-month-old son, Prince Louis of Cambridge. Nearby is three-year-old Princess Charlotte of Cambridge, who hangs next to grandma Camilla on a bench. The eldest grandchild, Prince George of Cambridge (5), sits upon grandpa Charles’ lap. Of course, newlyweds Prince Harry and Meghan Markle, Duchess of Sussex, remain a unit within the family, standing side-by-side.

As always, the royals are nothing short of pristine, but this time, they showed their sillier side. In one photo, the gang is looking straight ahead, smiling and poised. In the other, though, they let loose a bit, some laughing, leaned over, pointing, and looking away from the camera. And we thought we were the only ones who did one serious and one silly photo…

Because who can hold it together that perfectly all the time? Seemingly, no one. Not even a royal. Maybe soon we’ll even start getting day-to-day Instagram story updates from inside Buckingham Palace… or is that asking for too much?

Needless to say, fans are loving these photos and seeing three generations of royalty packed into the sweet portraits (especially how relatable they are).

Although the royal baby on the way isn’t apparent in these pictures, photos of Meghan Markle’s growing bump have circulated the internet in the last few days. On Sunday night, Markle and Prince Harry honored the Centenary of the Armistice at Westminster Abbey, where her bump was the most visible that fans have seen to date.

The Duchess of Sussex wore a sleek, two-piece navy ensemble with a belt just above her belly to accentuate her bun in the oven. The royal couple announced they were expecting their first child in October through a statement from Kensington Palace just months after tying the knot in May. 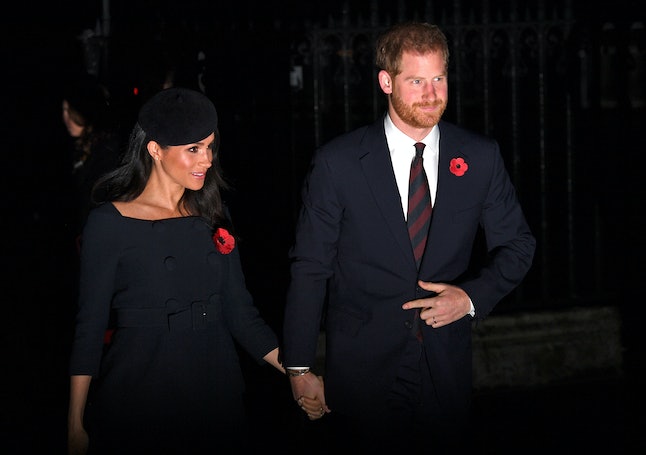 As far as Prince William and his bunch, they seem pretty content as a family of five… for now. In May, a source told Us Weekly that "their dream was always to have three kids." But that may not mean they’re ruling out adding to the crew. "Never say never," the source added.

Another royal insider assured the magazine that there are no sibling rivalries (at least not yet). "Charlotte is really enjoying having a younger brother to play with. She’s taking her big sister duties very seriously," they claimed. "Charlotte is just like [George]. They have a great bond, and a similar connection is growing between Charlotte and Louis.”

But seriously, when will we get those inside-the-palace IG stories? Perhaps one day.