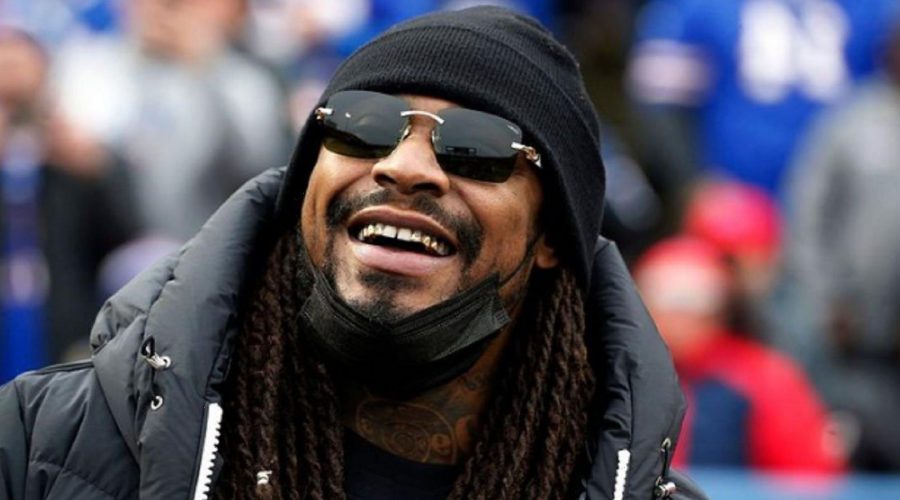 Former American football running back Marshawn Lynch who played for Seattle Seahawks, Buffalo Bills, and Oakland Raiders is widely recognized as a modern great and one of the NFL’s all-time finest. On April 22, 1986, he entered the world in Oakland, California. From 2004 to 2006, he was a football team member for the University of California, Berkeley Golden Bears. In 2006, he not only won the Heisman Trophy but also made the Maxwell Award watch list. Yet, Lynch does not live in a perfect world free of problems.

RELATED: The Theranos Bubble: The Rise And Fall Of Multibillionaire Elizabeth Holmes

How Marshawn Lynch Earned His Millions

Lynch was the second running back taken by the Buffalo Bills in the 2007 through the National Football League Draft, and they picked him with the 12th overall pick. He signed a six-year, $18.935 million deal with the Bills. The contract’s general guarantees amounted to $10.28 million, with a $3 million signing bonus. Lynch was Buffalo’s starting running back when he first arrived in the NFL. The first regular season game of his professional career was on September 9 against the Denver Broncos, a game in which he gained 90 yards on 19 rushes and scored his first touchdown. However, his team ultimately lost the match by 14-15.

On November 4, he had his breakout performance against the Bengals of Cincinnati. Lynch’s 29 carries for 153 yards and one touchdown contributed significantly to Cincinnati’s inability to move the ball through the air and kept the Bengals’ highly regarded offense on the bench. Lynch also threw a touchdown pass, this one too tight end Robert Royal, becoming the first Bills player not named quarterback to throw a touchdown pass since running back Joe Cribbs in 1981. Lynch was named to the NFC Pro Bowl roster on January 24, 2012, to take the place of Frank Gore of the San Francisco 49ers. As voted on by his NFL peers, he placed 94th among the league’s top 100 players in 2012.

Lynch originally signed a $31 million contract with the Seattle Seahawks who built a SuperBowl Caliber team on March 4, 2012. He extended that deal before by two years and $24 million in 2015. Lynch retired later, but it didn’t take him long to call it quits, as he was already the subject of comeback rumors a year after hanging up his cleats. Lynch agreed to a two-year, $9 million contract with a maximum of $16.5 million in 2017. The contract included a $2 million bonus for 1,000 running yards during the season. Lynch rejoined the NFL in the 2019 season’s last week, joining the Seahawks on December 23, 2019, alongside old colleague Robert Turbin after Seattle had lost three running backs to injury.

In 2022, Marshawn Lynch has over $35 million net worth, but he is estimated to have made over $100 million during his professional football career. After roughly a dozen years in the NFL, he has decided to call his quits in 2020.

How He Blew His Fortune Through Multiple Troubles With The Law

Despite his illustrious career, the football player has posted bond and paid fines multiple times due to his brushes with the police. Lynch was arrested for DUI in 2012 when the California Highway Patrol saw him driving erratically. A breathalyzer at the Oakland, California, North County Jail run by the Alameda County Sheriff’s Office showed that his blood-alcohol level was 0.10. Lynch pled guilty to a reduced charge in reckless driving in February 2014, and the case was dismissed. Lynch’s license was not suspended, but he was placed on probation for two years, fined $1,033, and ordered to do driver’s education. He was arrested near the Las Vegas Strip in August 2022 on suspicion of driving under the influence. According to reports, Lynch was discovered dozing in a damaged vehicle. Lynch faced four charges, including DUI. After he secured bail of $3,381, he was free to go.

NFL has made numerous wealthy athletes, however Lynch blew over his fortunre. Lynch has a reputation for avoiding interviews. During the 2013 NFL season, he refused to speak to the media and was fined $50,000; in response, Seattle Seahawks supporters organized a fundraising campaign to pay the fine. After Seahawks supporters contributed enough money to cover the punishment, he donated it to charity. The fine was later overturned in exchange for a promise to pay another $50,000 if he broke the same law again. On November 19, 2014, Lynch was fined $100,000 for not cooperating with the media.

Where Is Marshawn Lynch At The Moment

The Seattle Seahawks announced in August that fan favorites Michael Bennett and Michael Robinson would join the preseason broadcast team and that Marshawn Lynch would serve as a “special correspondent,” producing original content for several initiatives later in the season. Lynch, though, was arrested in Las Vegas on suspicion of DUI only days after Seattle revealed his new post. Lynch was stopped by responding authorities near Fairfield Avenue and West Utah Avenue intersection, just north of the world-famous Las Vegas Strip. After being apprehended, he was sent to the Las Vegas city jail and booked. Lynch was issued citations for DUI, failing to refuse or surrender, failing to maintain lane usage, and car registration lapse. The judge decided on a bail amount of $3,381. The court case against him will be heard in December.

READ NEXT: The Rise and Fall of the Yahoo Empire