My dad worked for IBM in the 1970s and they gave him an orange plastic sign to put on his desk that said “THINK”.

This all-caps company slogan dated back to a sales meeting in 1911, when the man who would later be IBM’s chief executive complained “the trouble with every one of us is that we don’t think enough”. 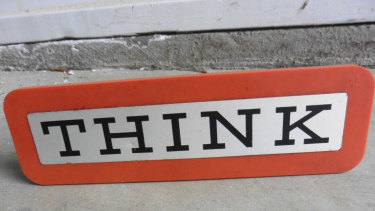 At least, that’s what Wikipedia tells me he said.

Now, I have a cartoon on my virtual desktop which does a very different job. It's by XKCD and shows a man on his computer. His partner asks “are you coming to bed?”

“I can’t,” says our hero. “This is important. Someone is WRONG on the internet.”

It's supposed to be a warning. To me. To follow a simple rule: don’t correct people on the internet because it’s rude, provocative and almost always utterly pointless.

But some rules are cartooned to be broken. 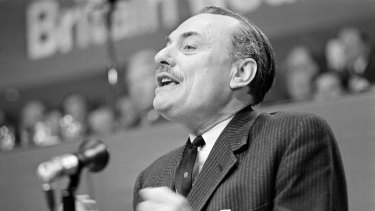 You see … in early December News Corp Australia held a “private all-staff meeting”. Following hallowed media tradition the entirety was leaked (telling journalists to keep a secret is putting a basket of meat in a hyena cage with a sign saying “not for hyenas”).

Oooh, I thought. Grim irony. This guy defends his news organisation against accusations it's too stridently right-wing by quoting Enoch Powell, the British MP who delivered one of the most odiously racist political speeches in that country’s modern history.

In his infamous “Rivers of Blood” speech Powell recalled a constituent complaining that “in this country in 15 or 20 years’ time the black man will have the whip hand over the white man”, and went on to agree that immigration was “a nation busily engaged in heaping up its own funeral pyre”.

Why Enoch Powell would leap to mind while defending the "diversity" of views on Sky After Dark is … not the point I’m making here.

The point is that when people summon up their favourite quote it often turns out to be a misquote.

Funnily enough, I discovered, the Powell quote had been mis-attributed to Churchill by none other than Turnbull (which made me wonder if Whittaker had deployed it as a subtle dig). Turnbull used it in 2017 as optimistic advice to Donald Trump, from “a very great politician, Winston Churchill”. At the time our US correspondent Matthew Knott remarked it was “one of Turnbull’s favourite phrases to trot out, outdone only perhaps by describing something as a ‘penetrating glimpse of the obvious’."

Knott, like Whittaker, attributed the quote to Enoch Powell. As do many, many "famous quotes" sites on the internet, and almost none of them supply a source. One site, finally, was more helpful: it referenced the Oxford Dictionary of Modern Quotations (Churchill, according to the ODMQ, once said “it is a good thing for an uneducated man to read books of quotations”).

I checked the dictionary and it did indeed cite the line Whittaker used, attributed to Enoch Powell, sourced to “Guardian 3 December 1984”.

But no, instead of getting on with my day, I had to finish scratching this itch. I dug up the Guardian of December 3, 1984. And on page 12 an opinion piece contained the line: “But for a politician to complain about the press is like a ship’s captain complaining about the sea”.

There it was. In an article by Julian Critchley, a nowadays obscure Conservative MP. Not Powell.

Critchley never had much time for the hard right and was actually criticising Powell, calling him “too clever by half” and “patronising” over some lost-in-time debate over NATO. 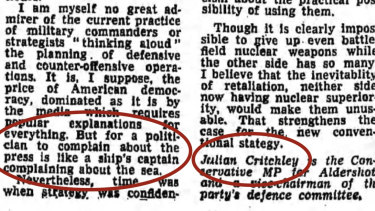 A snippet from The Guardian, December 3, 1984.Credit:newpsapers.com

The quote in question was an exasperated shrug aimed at America, “dominated as it is by the media which requires popular explanations for everything”.

A line one suspects Whittaker wouldn’t quote with approval.

Anyway, I put all this on Twitter with receipts, and a few days later the history team at Oxford University Press came back with the very gratifying: “We’ve done our full Oxford due diligence, and you are quite right about this error. We will be correcting as soon as possible. Thanks for pointing it out!”

It felt good. Turnbull, too, thanked me for pointing out his error (in a very Turnbullian way, instructing me that the quote was “really” about the “unaccountable power of the press”).

So … is there a lesson here? My colleague Stephen Brook thinks it might be something about the perils of the Information Age, how we have so much information at our fingertips but so little knowledge.

But … I checked the IBM guy’s quote too, and it turned out to be well-sourced. If something’s on the internet it might not be wrong. Not always. But sometimes it pays to think.

12/17/2020 lifestyle Comments Off on The (really) true story of how I made Oxford rewrite a dictionary
Recent Posts
We and our partners use cookies on this site to improve our service, perform analytics, personalize advertising, measure advertising performance, and remember website preferences.Ok