Birthday blue! Pregnant Meghan is nowhere to be seen as Harry joins The Queen on her 93rd birthday alongside William, Kate, Zara and Mike Tindall at Easter Sunday service

The Queen looked radiant in a duck egg blue ensemble today as she celebrated her 93rd birthday by attending an Easter Sunday service at St George’s Chapel.

Her Majesty was joined by the Duke and Duchess of Cambridge and the Duke of Sussex at Windsor Castle today – though pregnant Meghan was nowhere to be seen.

Zara and Mike Tindall, Prince Andrew, Princess Beatrice, Sophie Countess of Wessex, her son James Viscount Severn, and Peter and Autumn Phillips and were also in attendance for the seasonal service.

Kate, 37, who wore a recycled lilac Alexander McQueen coat dress, beamed as she greeted her grandmother-in-law with a curtsey outside the chapel. She previously wore the gown in 2014 on a three-week tour of Australia and New Zealand.

Earlier today the Duke and Duchess of Sussex sent birthday wishes to Her Majesty, writing on Instagram: ‘Happy Birthday Your Majesty, Ma’am, Granny. Wishing you the most wonderful day! Harry & Meghan.’

Prince Harry, 34, who walked towards the chapel beside Princess Anne as opposed to his brother William, 36, managed to match his tie to his grandmother’s colour scheme. 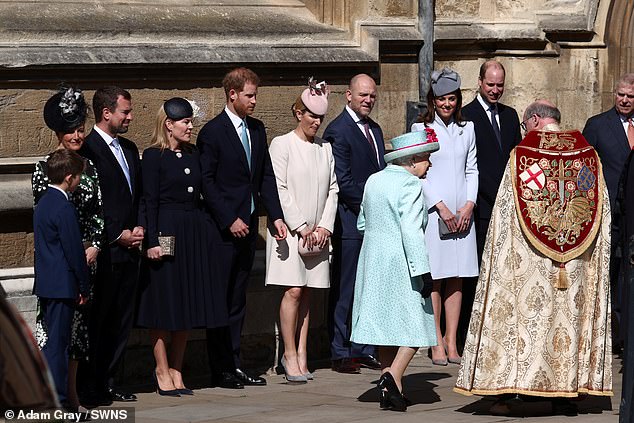 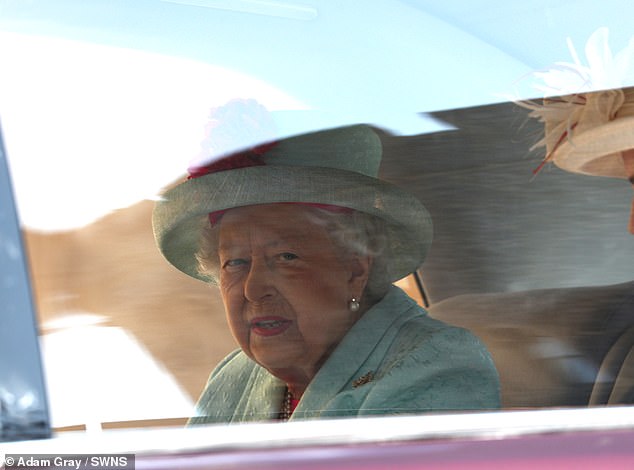 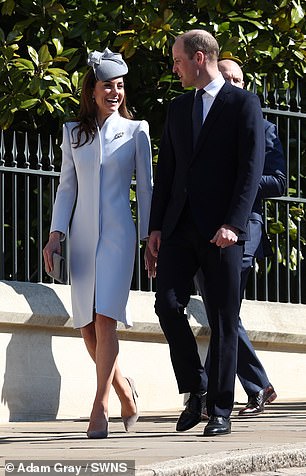 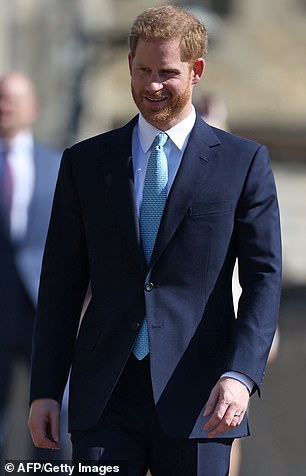 The Duke and Duchess of Cambridge, left, and The Duke of Sussex arrived for the ceremony – with Prince Harry matching his tie to his grandmother’s colour scheme 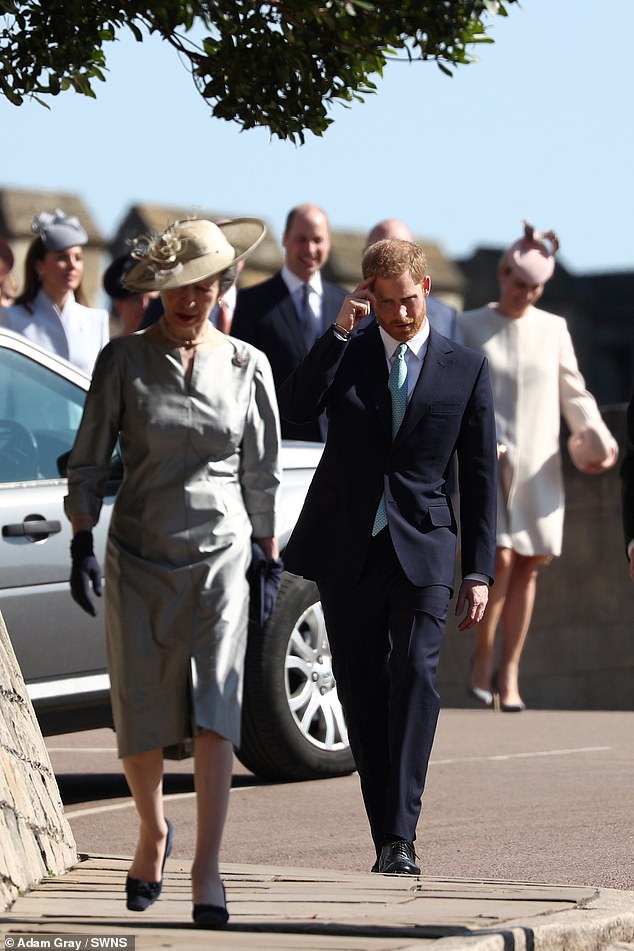 Prince Harry walked towards the chapel beside Princess Anne, while his brother William was a few paces behind with the Tindalls

Pregnant Meghan, 37, who is expected to give birth any day now, was absent from the service. She and Harry released a statement last Thursday explaining the decision, revealing that they will also not be sharing any of the plans surrounding the birth, such as the date or the location.

Elizabeth II, who has a strong faith, usually celebrates Easter at Windsor Castle by joining members of her family at a service in St George’s Chapel.

Later today at Buckingham Palace, the Band of the Irish Guards will perform a rendition of Happy Birthday in her honour on the forecourt as part of the Changing of the Guard ceremony.

Earlier this week The Queen was joined by her granddaughter Princess Eugenie for the annual Maundy Thursday service, which sees her offering commemorative coins to senior citizens.

The recipients are retired pensioners, recommended by clergy and ministers of all denominations – in recognition of service to the Church and to the local community. 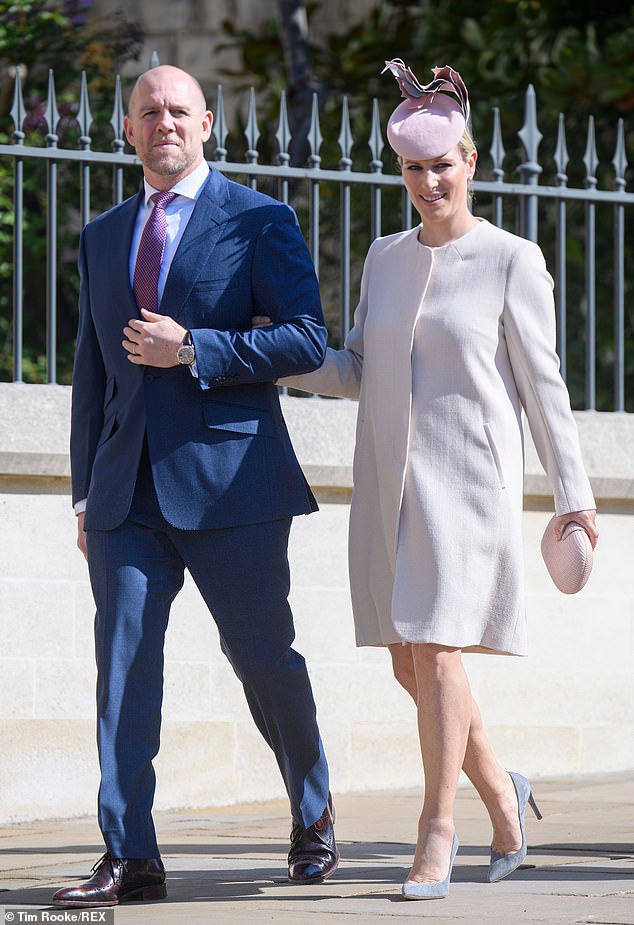 Mike Tindall and Zara Tindall arrive arm-in-arm for the service, with the former rugby player matching his tie to his wife’s accessories 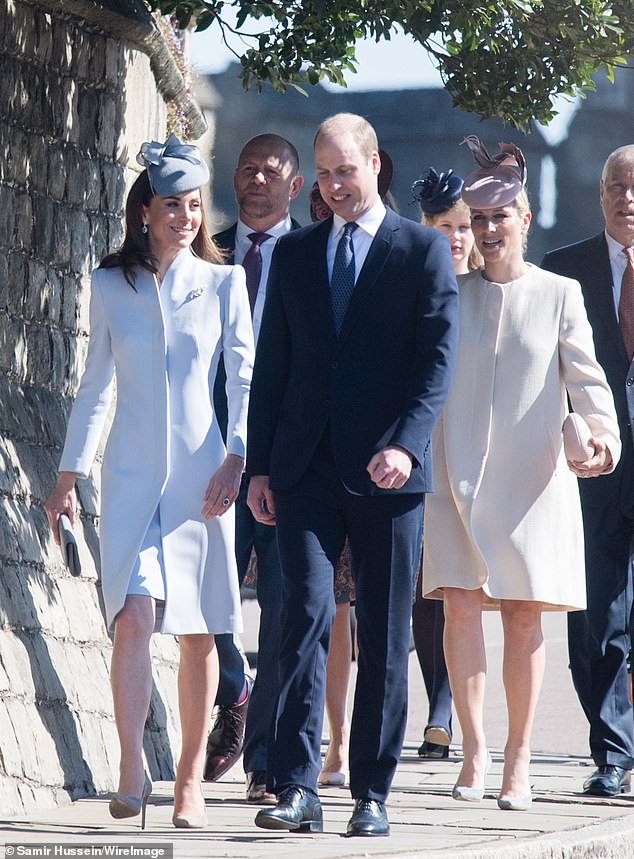 Both Zara, right, and Kate, left, opted for chic coat dress styles, with Zara choosing a neutral cream shade which she teamed with pink accessories 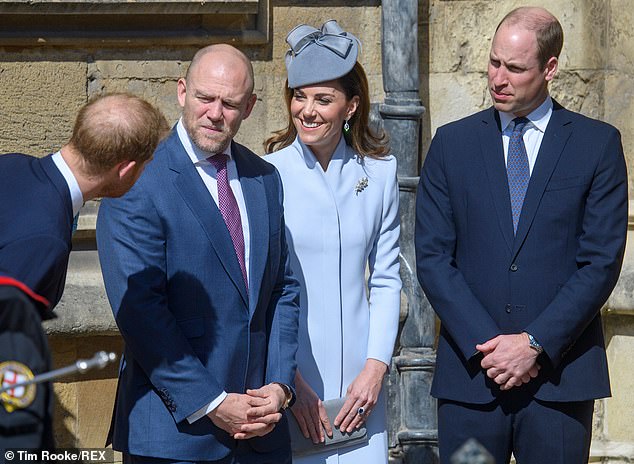 Prince Harry leans over to exchange a few words with Mike Tindall, Kate and William as they await the Queen’s arrival 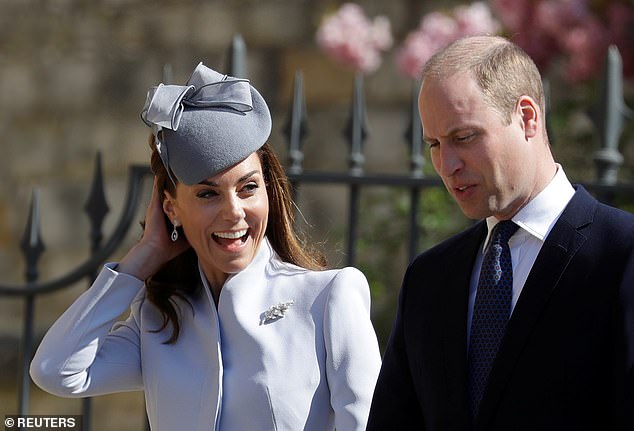 Kate, pictured laughing as she arrives with her husband, was on a rare outing without the children – Prince George, Princess Charlotte and Prince Louis 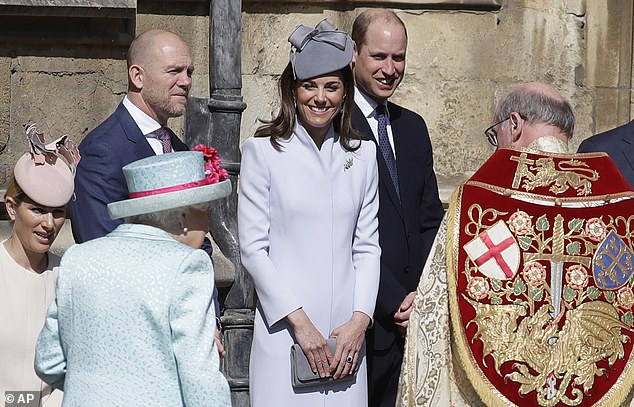 Kate, who teamed her lilac gown with a grey beret-style hat and clutch bag, smiled as The Queen walked by ahead of the service 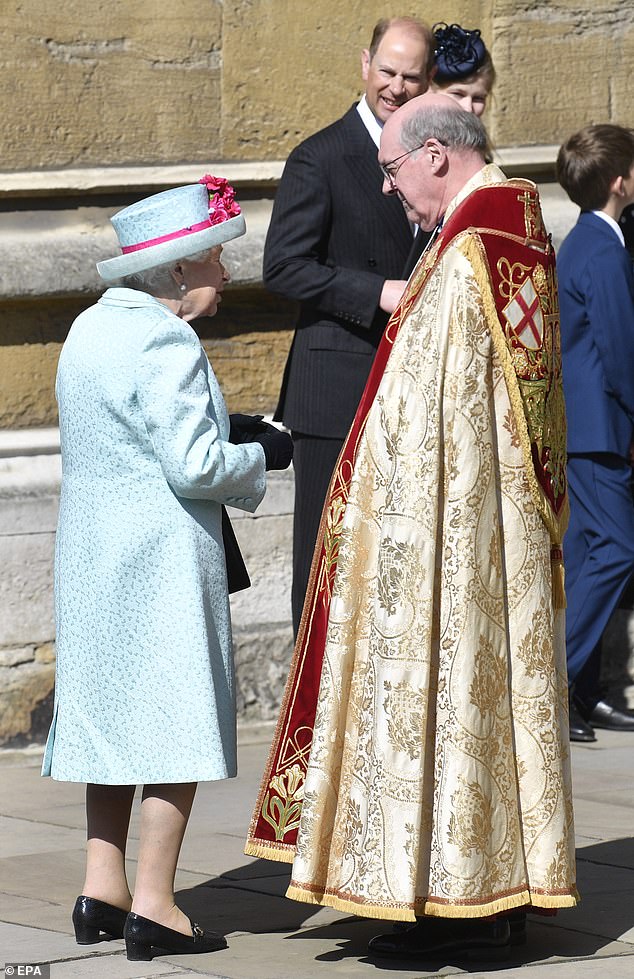 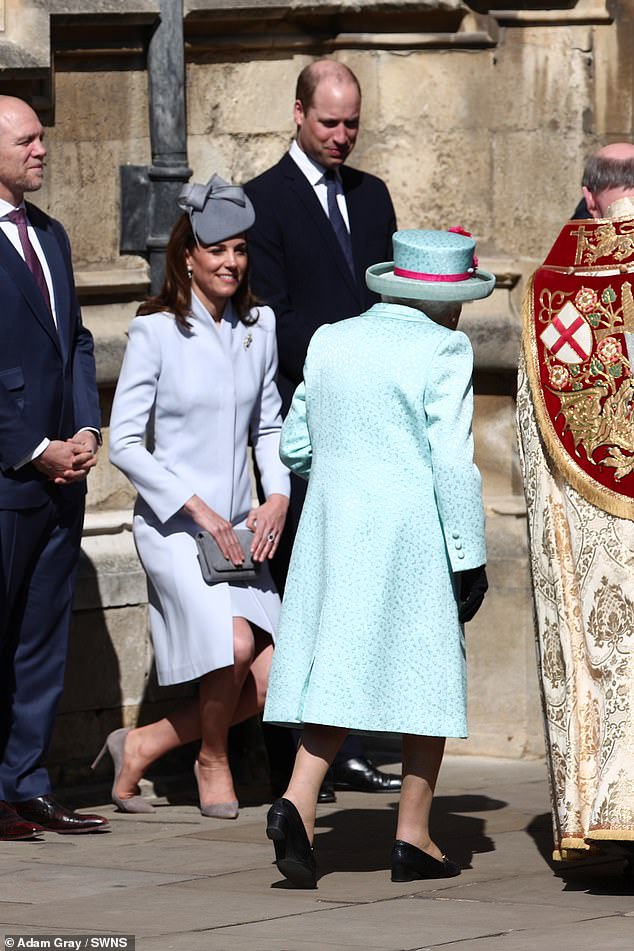 Her Majesty was joined by the Duke and Duchess of Cambridge, pictured curtseying as the monarch walked past, and the Duke of Sussex at Windsor Castle today – though pregnant Meghan was nowhere to be seen

Paying their respects: Sophie Countess of Wessex, Peter and Autumn Phillips and James Viscount Severn greet Her Majesty as she arrives for the morning service 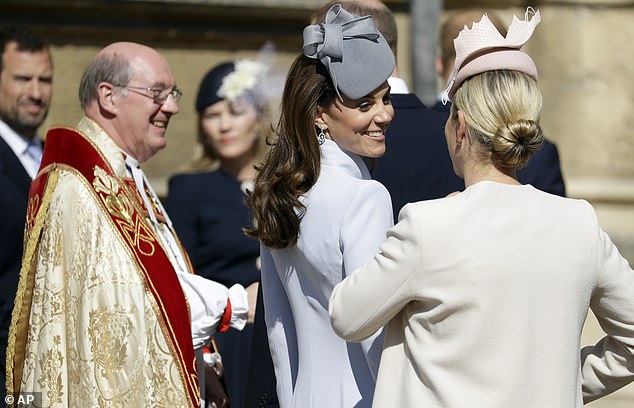 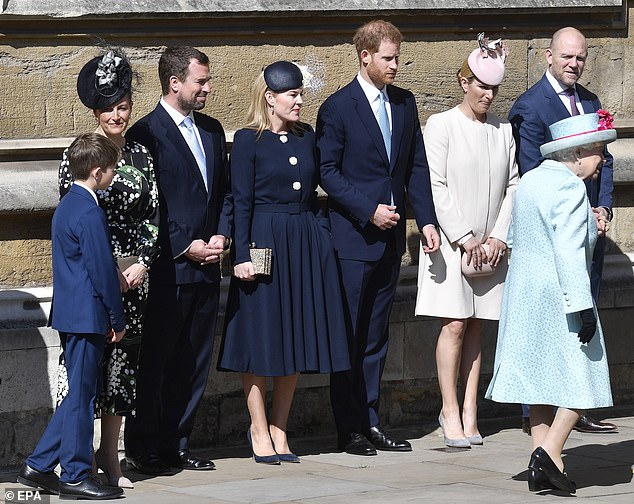 April 21, the day the Queen was born, is the first of the monarch’s two birthdays.

She also has an official one on the second Saturday in June each year, which is commemorated with the Trooping the Colour parade.

Gun salutes are also fired as a mark of respect to the Queen on her special day – but never on a Sunday, so this year they will be delayed by one day.

On Monday, the King’s Troop Royal Horse Artillery will ride their horses and gun carriages past Buckingham Palace en route to Hyde Park to stage a 41 Gun Royal Salute at noon. 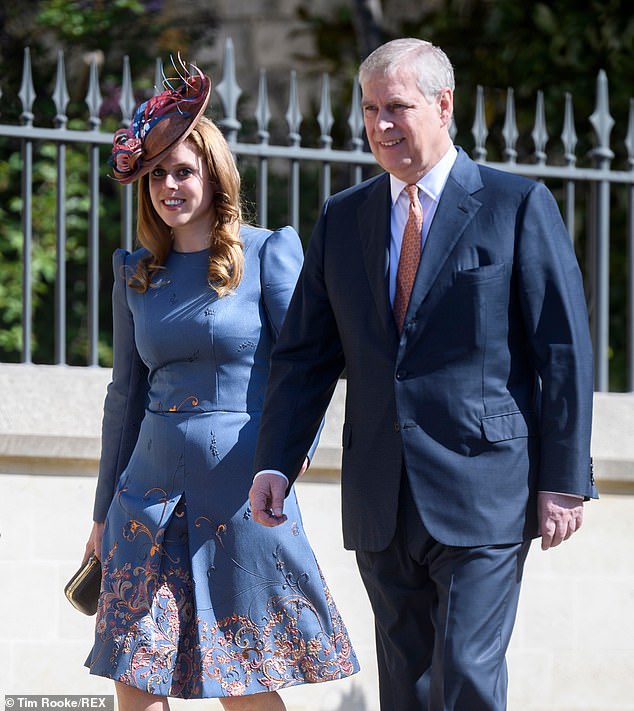 Princess Beatrice and Prince Andrew were also in attendance, with Beatrice sporting one of her signature elaborate hats 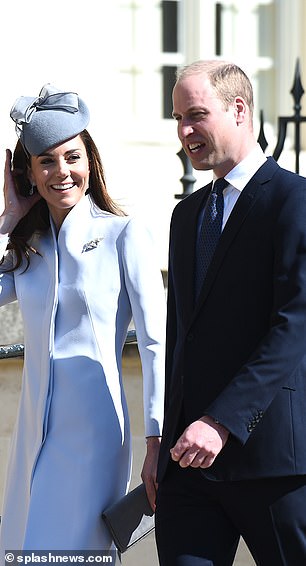 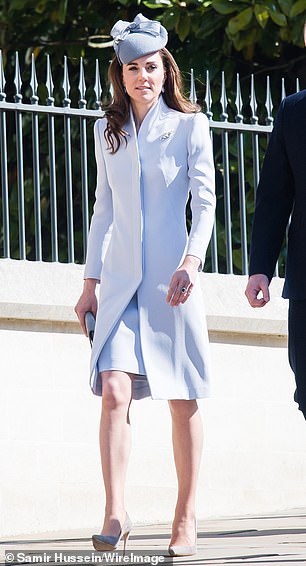 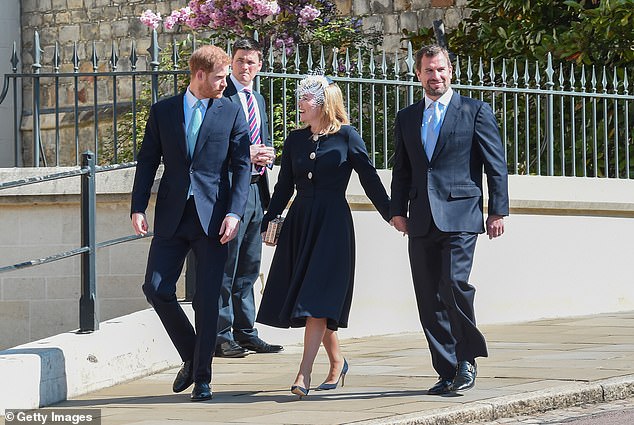 Prince Harry, Duke of Sussex, found the time to have a chat with Autumn Phillips and Peter Phillips as the trio arrived at church 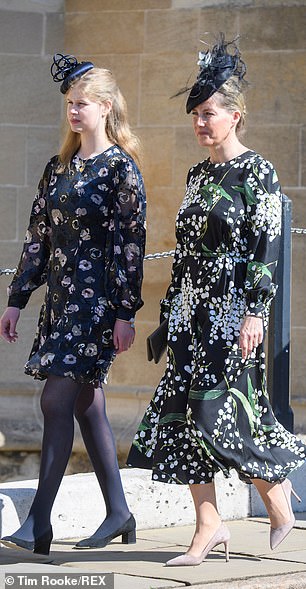 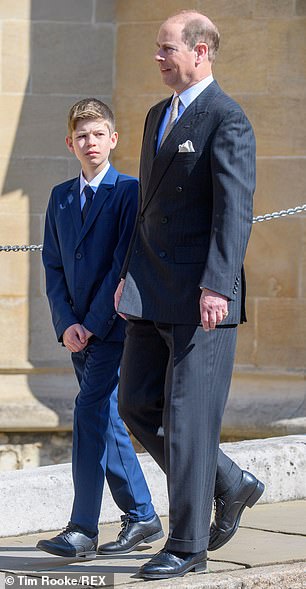 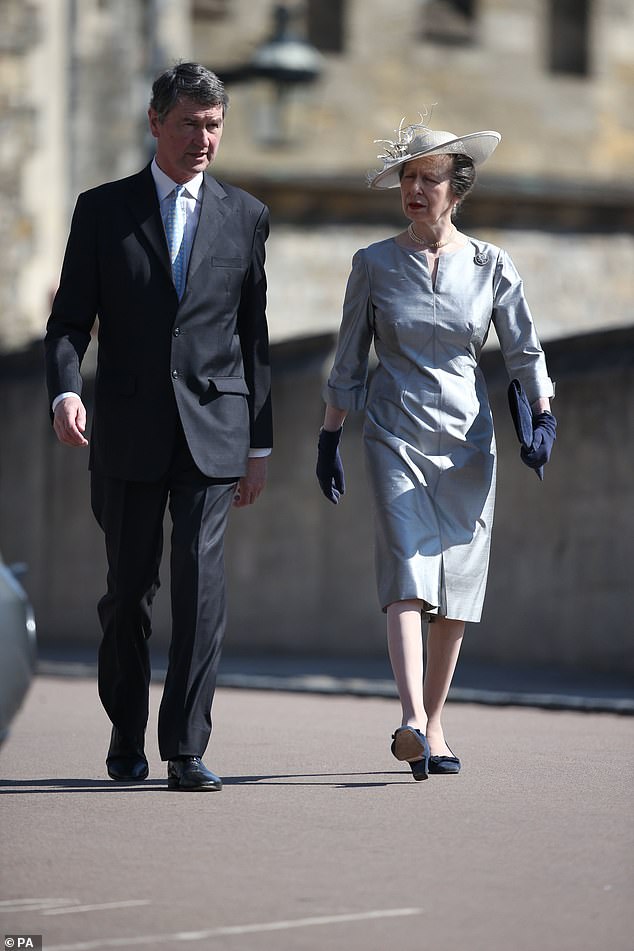 A 62-gun salute will also be performed by the Honourable Artillery Company at the Tower of London at 1pm the same day.

With the death of 88-year-old King Bhumibol Adulyadej of Thailand in 2016, the Queen now holds the record for the world’s longest reigning living monarch. 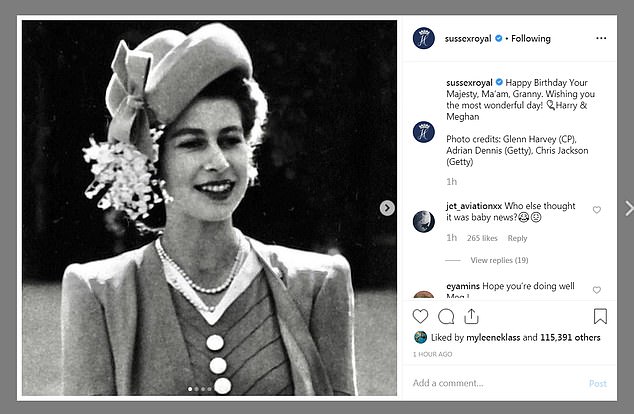 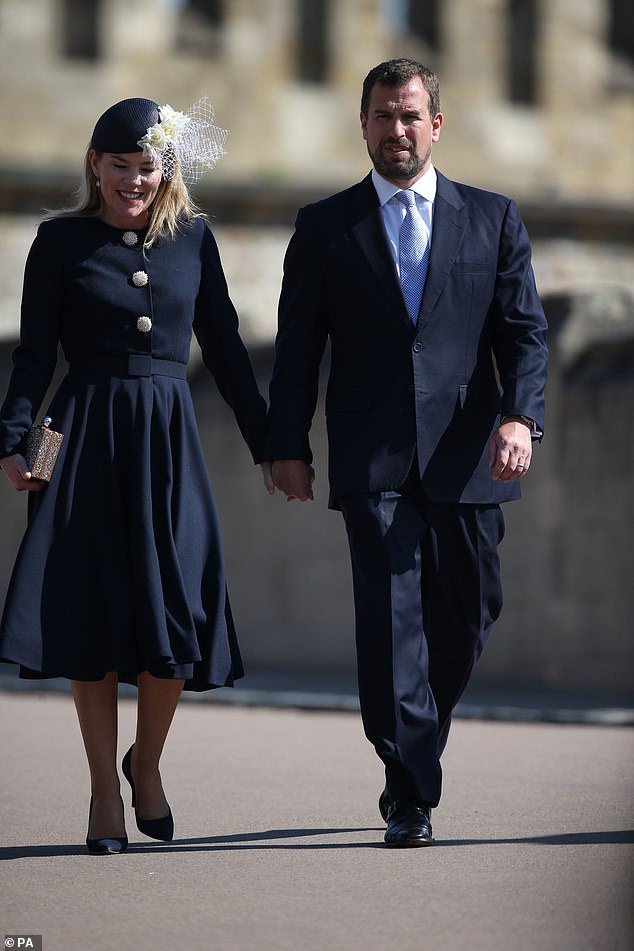 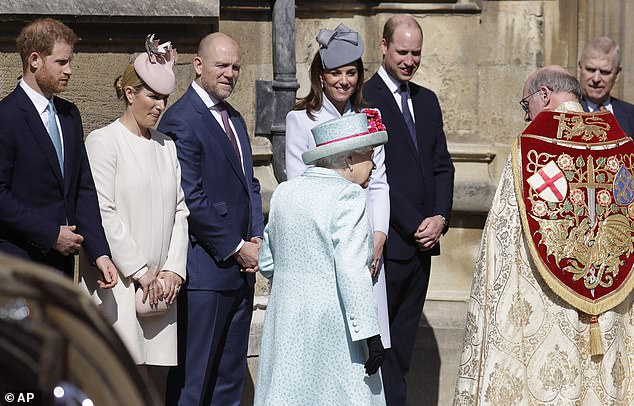 The Queen, pictured being welcomed at the Windsor Castle chapel by Prince Harry, Zara and Mike Tindall and the Duke and Duchess of Cambridge, became Britain’s longest-reigning monarch, passing her great-great grandmother Queen Victoria’s record, in September 2015

04/21/2019 lifestyle Comments Off on The Queen looks radiant at Easter Sunday service on her 93rd birthday
Recent Posts
We and our partners use cookies on this site to improve our service, perform analytics, personalize advertising, measure advertising performance, and remember website preferences.Ok