To fail to deliver Brexit would be to “break faith with the British people” said the prime minister earlier this week. And yesterday, in pursuit of that logic, she did an extraordinary thing. Recognising that there is no majority in parliament for her deal she began preparations in earnest for us to leave without one. And here is what that will mean.

Gavin Williamson said we will “have 3,500 service personnel held at readiness” – he must anticipate civil unrest. Dominic Raab had confirmed we were taking measures to “make sure that there is adequate food supply” and Matt Hancock says we have begun to stockpile perishable medicines. And if that planning is adequate, we will continue to be safe and have enough to eat and there will be no further deaths. If it is adequate.

This is not project fear; each is a serving or recent cabinet minister.

The effects do not stop with the short term. The Office for Budget Responsibility has predicted, in addition to shortages, a sharp fall in asset prices (you will be poorer) and a squeeze in real incomes (you’ll earn less too). The government’s own economic analysis predicts a 7.7-9.3% hit to GDP over 15 years. The burden will fall most heavily on those least able to bear it: the north-east, the north-west, the West Midlands and Northern Ireland. All will be harder hit by far than London. Manufacturing jobs and farmers will be especially hard hit.

Project Fear? The Office for Budget Responsibility’s record is of over-optimistic forecasting. The government’s analysis is cheerier by far than the cross-Whitehall analysis produced earlier in the year. And here’s an inside take: a senior civil servant working inside the Department for Exiting the EU (DExEU) wrote to me earlier of what they are calling D1ND (Day One No Deal): “however bad it looks from the outside it is a thousand times worse from the inside.” This, too, must be right – a government keen to sell no deal will downplay the downside.

Of course, for many, this decision is not about money. We do not find our sense of who we are by emptying out our pockets, a point I made of Scottish independence in 2014. But only 11% of leavers believed Brexit would leave them worse off. And the official Leave campaign promised the very opposite of no deal: “we will negotiate the terms of a new deal before we start any legal process to leave”. You may wish to leave whatever the price – but how can you know your fellow voters shared your view?

It is hard, for those still able to be honest with themselves, to pretend the referendum gave a mandate for no deal. Do we find one in parliament?

Let us look first to the Labour party. All the while, as the political kaleidoscope has shifted and changed, it has held firm to one constant: “leaving the EU with ‘no deal’ is the worst possible deal for Britain.” Its position is echoed by the TUC’s general secretary, Frances O’Grady who says leaving without a deal “would be devastating for working people.”

But surely parliament will need to consent? That is far from certain. Beth Rigby, the deputy political editor at Sky News, quotes a “Cabinet source” as saying “there is ‘technically’ no way no deal can be blocked by MPs if govt doesn’t lay any legislation between now & then to allow MPs to table amendment.”

Not in the referendum and not in parliament. Does this defining political event of our lifetimes need no mandate? Is there nothing we can do to stop it? Do we have nothing left but petitions and marches with the faithful? 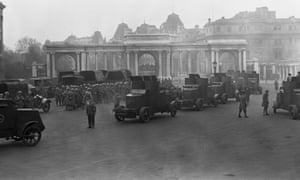 Writing of our last general strike, in 1926, the then prime minister, Stanley Baldwin, said “Constitutional government is being attacked… The general strike is a challenge to parliament and is the road to anarchy and ruin.” But today the boot is on the other foot. A minority government boasts of its ability to bypass parliament. Our constitution is the emperor’s new clothes and reveals underneath only centuries of complacency. The Conservative party, riven with division, is near collapse leaving behind a black hole that would swallow all of us.

It is time for the people, the workers to take control. For the hundreds of thousands who will lose their jobs this is no joke; to save our democracy this is no drill; it is no rehearsal for the sick and the vulnerable who will suffer if the government’s planning fails.

If the government will not listen, if it refuses to recognise the supremacy of parliament, we must have a general strike.