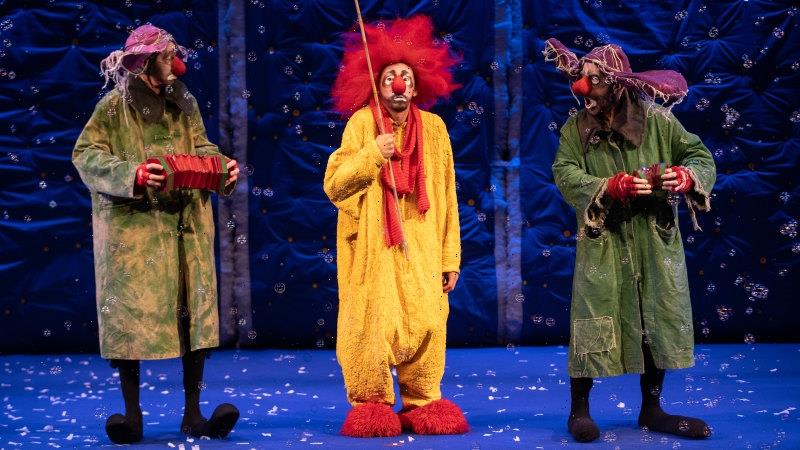 Don’t book tickets to Slava’s Snowshow expecting a laugh-a-minute comedy. It’s not that kind of performance. A flowering of imagination from the mind of Russian-born, France-based performer and creator Slava Polunin, the Snowshow is something both gentler and more surreal – 100 minutes of dreamlike exploration through a world where logic and reason have no call to intrude. 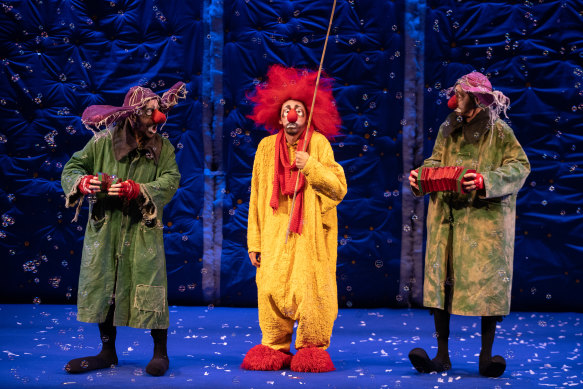 Slava’s Snowshow has returned to Australia, with its tour kicking off at the Arts Centre in Melbourne.Credit:Simon Schluter

Our hero is Assissiaï, a Chaplin-like figure in a baggy yellow jumpsuit who wanders through a world in which a bed-frame can become a boat, a chair can become a horse, and an encounter with a jacket and hat on a hatstand can become a deeply moving love story.

He is something of a holy fool – sometimes brooding and tragic, sometimes filled with childlike delight (this character, originally played by Polunin himself, is now performed by one of his proteges). Then there is the chorus: a chaotic band of rustics in long green coats, jester-like hats and comically oversized shoes, who take to the stage like Leunig characters come to life. 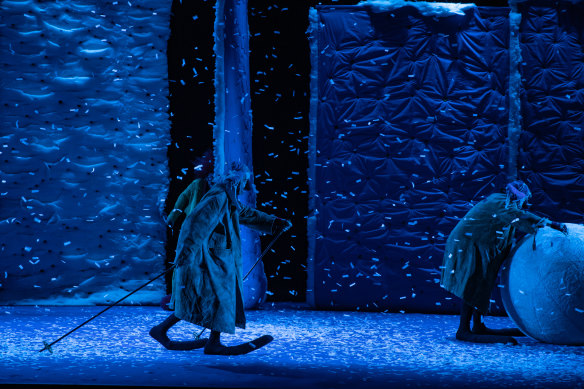 Slava’s Snowshow takes the audience to a dreamlike world free of logic and reason.Credit:Simon Schluter

The show has no dialogue, no overarching story. Rather, it is a series of delightfully oddball scenes that range between simple acts of physical comedy to extraordinarily realised set-pieces. One minute you’re giggling over a classic suitcase gag, the next you’re watching mysterious, winged figures drift across the stage like something out of a dream. Every moment is tightly choreographed: there is not a dramatically oversized gesture or poignantly dejected shuffle that hasn’t been honed for its comic potential.

Polunin understands that clowning should be more than slapstick and sight gags, and that lyricism, poetry and pathos are as important to comedy as pantomime and buffoonery. He knows the comedic potential of a scene involving a very tall man and a very short man, and that there are few things funnier than a person falling off a chair. He is not above doing the occasional bit about urination (this joke proves especially popular with younger members of the audience). He understands that perhaps foolishness is the only proper response to these foolish times we live in.

Slava’s Snowshow has been playing in theatres across the world for nearly 30 years. This makes sense. The show’s longevity is testament to its near-universal appeal – a tenderly tragicomic strain of clowning that brings Polunin’s visions of love, loneliness, discovery and wonder to poignant, animated life.