Celebrities like Natalie Portman, Tyra Banks and Jeff Goldblum have tried to beat the heat on the hugely popular weekly web series, “Hot Ones,” on which celebrities are interviewed while eating violently-hot chicken wings. And at about 3 million views per episode, “Hot Ones” shows no signs of cooling off.

Producer Chris Schonberger said, “I was fascinated by interview shows in general – it’s the oldest construct in media.” So he approached host Sean Evans about creating a show around heated interviews.

“We didn’t really expect hot sauce to break down people the way that it does,” Evans added.

“I think the mechanics of this show are just this one, big trust exercise with Sean,” Schonberger said.

“And there’ve been times when I’m looking across the table and I’m, like, this is person is up against the ropes, like, I don’t even know if they’re gonna make it,” said added.

She asked Evans, “What are the tips you give to folks on how to handle all this hotness?”

The show’s popularity may partly be due to our changing tastes. Hot sauce sales are increasing faster than any other condiment. The total hot sauce market is approaching $2 billion a year.

The source of some of the most intense heat is in a field in South Carolina. “Smokin’ Ed” Currie is the founder of the creatively-named PuckerButt Pepper Company. “Ninety-five countries get our products on a regular basis,” he said.

He believes his product is downright addictive. “When you eat super-hot peppers, you get an endorphin rush,” Currie said.

He’s not just blowing smoke. A compound in chilis, called capsaicin, fools us into thinking our bodies are burning, prompting the release of pain-relieving endorphins, producing a natural high.

“I might have been catchin’ a little buzz eating peppers,” he laughed.

And he’s spreading that buzz through his prize pepper, the fearsome Carolina Reaper, currently ranked as the hottest pepper in the world – about 1,000 times hotter than a jalapeno.

Of course, he wanted to share it with Miller. 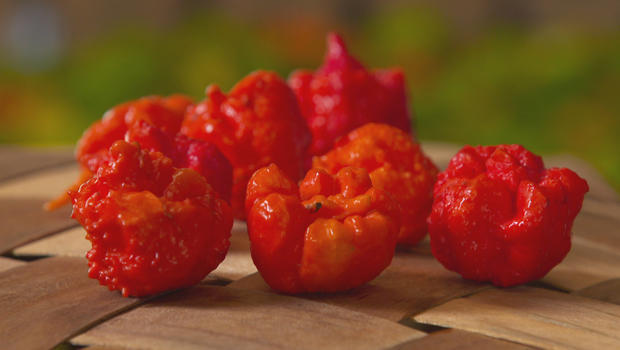 “You notice how it’s hotter right away? That’s the oil reacting with the receptors,” Currie said. “Now it’s gonna get hot.”

“Have the endorphins kicked in yet?” Miler asked hopefully.

“The things I do for my job,” Miller said, burning.