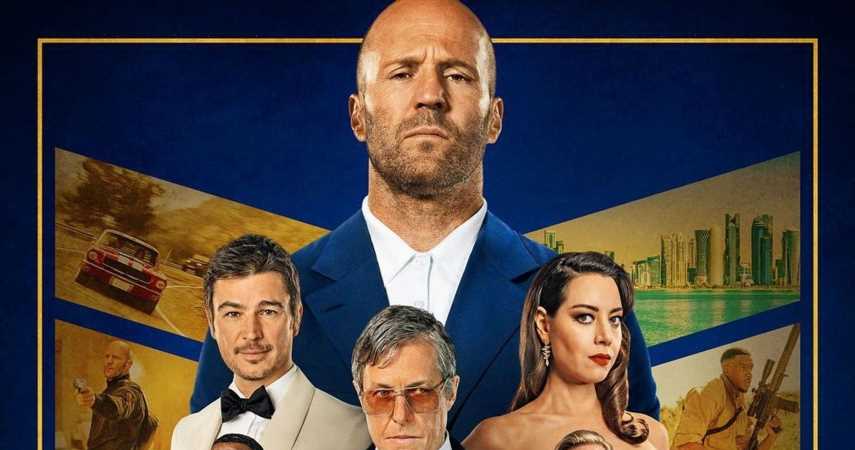 Operation Fortune: Ruse de Guerre is a 2023 spy action-comedy movie directed by Guy Ritchie with a screenplay written by Ritchie, Ivan Atkinson, and Marn Davies. Its story revolves around Orson Fortune, a super spy played by Jason Statham who teams up with a bunch of special agents on a mission to stop the sale of a new lethal weapon technology that threatens to disrupt world peace. Along with Jason Statham, the cast includes Aubrey Plaza as Sarah Fidels, Hugh Grant as Greg Simmonds, Josh Hartnett as Danny Francesco, Bugzy Malone as J.J., and Cary Elwes as Nathan Jasmine.

Operation Fortune: Ruse de Guerre was released on January 4, 2023, in international theaters worldwide, while it is yet to have a domestic release. The movie received favorable reviews from critics, with an IMDB rating of 6.8 and a Rotten Tomatoes rating of 68%. Below is a list of all the major stars of the movie ranked according to their net worth.

British character actor Peter Ferdinando is renowned for his dynamic, varied performances. He has worked with filmmaker Gerard Johnson as the title character in the critically acclaimed Tony and the protagonist in Muscle and the award-winning Hyena. He also appeared in films like Snow White and the Huntsman, 300: Rise of an Empire, and Ghost In The Shell. He plays the character of Mike in 2023’s Operation Fortune: Ruse de Guerre. Peter has amassed an approximate net worth of $600,000 to date.

Eddie Marson is a British actor best known for his role in the critically acclaimed 2008 movie Happy Go Lucky. He won the London Film Critics Circle and the National Society of Film Critics Awards. The actor also starred in movies like V for Vendetta, Mission: Impossible III (2006), Hancock, Sherlock Holmes, Sherlock Holmes: A Game of Shadows, and The World’s End. According to Celebrity Net Worth, he reportedly has a net worth of $800,000. He also appeared in a substantial role as Knighton in Guy Ritchie’s Operation Fortune: Ruse de guerre.

RELATED: The Current Net Worth Of The Cast Of ‘Cheers Now’, Ranked

Sam Douglas is a British actor most known for playing Scott Shelby, in the PlayStation 3 video game Heavy Rain, as King Herod in the History Channel miniseries The Bible, and as Rosebud in the film Snatch. He plays the role of Saul Goldstein in the 2023 Spy Comedy Operation Fortune: Ruse de guerre. Sam has a rumored net worth of around $1 million.

Aaron Davies, a.k.a Bugzy Malone, is a British rapper and actor who has previously appeared in Guy Ritchie’s 2020 movie, The Gentleman. He also starred in Operation Fortune: Ruse de Guerre as J.J., a skilled operative and operation team member. He was paid a rumored $800,000 for his role in the movie. He has an estimated net worth of $2 million, as per reports by WealthyGorilla.

Actress Lourdes Faberes was born in the Philippines and currently resides in the UK. She is most recognized for her theatre, film, and television roles. She appeared in TV Shows like Good Omens, Knightfall, Whiskey Cavalier, and The Sandman. She appeared in the Bond movie No Time to Die in 2021. Lourdes plays the character of Emilia in Operation Fortune: Ruse de Guerre, and according to rumors, she was paid a salary of $500,000 for the role. She has an impressive net worth of around $4 million.

Max Beesley is an English actor and musician known for various TV shows like Bodies, The History of Tom Jones, Survivors, Mad Dogs, Homeland, Suits, The Last Enemy, etc. He plays the role of Agent Ben Harris in Operation Fortune: Ruse de Guerre, as rumors suggest he charged a whopping $300,000 for his role. Owing to Max’s illustrious television career, he has an estimated net worth of $5 million.

Aubrey Christina Plaza is an actress, producer, and comedian known for her roles in movies like Safety Not Guaranteed, Mystery Team, Scott Pilgrim vs. the World, The To Do List, Life After Beth, and Mike and Dave Need Wedding Dates. She has also appeared in TV shows like Parks And Recreation, Legion, and The White Lotus, which earned her a Golden Globe nomination. Aubrey Plaza starred as Sarah Fidel, a member of Fortune’s team and a skilled operative in Operation Fortune: Ruse de Guerre. The Golden Globe-nominated actress charged a fee of $1.5 million for her role, as per rumors.

Ivan Simon Cary Elwes is an English actor and writer for playing lead roles in movies like The Princess Bride, Robin Hood: Men in Tights, and the Saw franchise. He has appeared on numerous TV and Web series like Seinfeld, From the Earth to the Moon, Psych, Life in Pieces, Stranger Things, and The Marvelous Mrs. Maisel. The veteran actor enacts the role of Nathan Jasmine, a pivotal member of Fortune’s team in the movie Operation Fortune: Ruse de Guerre. According to rumors, the Stranger Things actor charged a fee of $1 million for his role in the movie and reportedly has a net worth of $7 million.

Actor and Producer Josh Hartnett is famous for starring in movies like Pearl Harbor, Black Dahlia, Black Hawk Down, 40 Days and 40 Nights, I Come with the Rain, etc. He will be next seen in a pivotal role in Christopher Nolan’s Oppenheimer in 2023. The Pearl Harbor actor plays Danny Francesco, a Hollywood superstar used as bait by the Fortune Team in the movie Operation Fortune: Ruse de Guerre. As per rumors, Josh has been charged $1.5 million as remuneration for his role in the film. He is one of the richest among the star cast of the Guy Ritchie Diretorial with a probable net worth of $25 million as per Showbiz CheatSheet.

Jason Statham is an English actor known for his roles in high-octane action thrillers. He is hugely popular worldwide for his roles in big-budget action blockbusters like the Fast and Furious franchise, The Transporter Trilogy, The Italian Job, The Expendables, etc. He is one of the most bankable stars in Hollywood, with his movies has grossed more than $4 billion worldwide. In the 2023 movie Operation Fortune: Ruse de Guerre, he plays the titular role of Orson Fortune, a private contractor/assassin and the leader of Operation Fortune. He charged a startling fee of $20 million, as per rumors making him the highest-paid actor in Operation Fortune: Ruse de Guerre. He also has a whopping net worth of $90 million owing to his stardom.

The movie Operation Fortune: Ruse de Guerre has a star-studded cast of high-profile wealthy actors, with Jason Statham being the Highest Paid and richest, followed by Hugh Grant and Josh Hartnett.

READ NEXT: A Peek Inside French Montana’s Car Collection

01/20/2023 lifestyle Comments Off on The Cast Of ‘Operation Fortune: Ruse de Guerre’, Ranked By Net Worth
Recent Posts