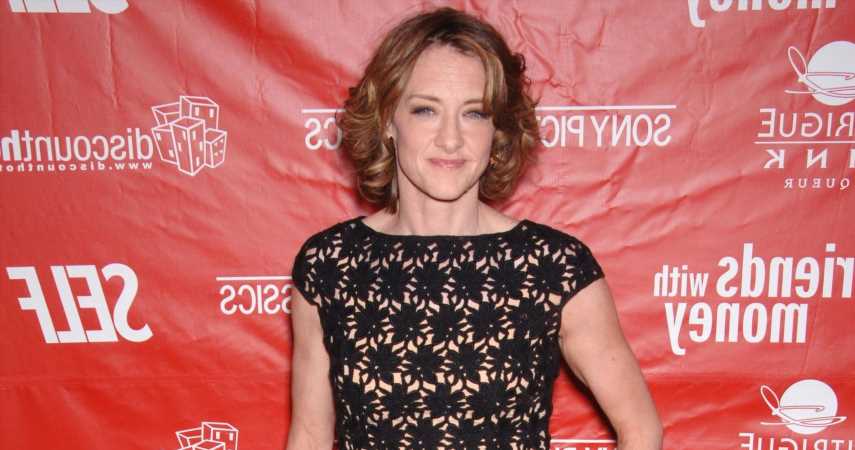 You can’t mention John Cusack without calling out his movie-star sister, Joan Cusack. After all, she has been in some unforgettable movies throughout the decades, including Adams Family Values (1993), Confessions of a Shopaholic (2009) starring Isla Fisher and John Goodman, and Corrina, Corrina (1994) featuring Whoopi Goldberg and Ray Liotta. Born in New York City in 1962, Joan is the older sibling of her American Sweetheart actor brother, John Cusack, as well as her sister Ann Cusack, who has starred in films like A League of Their Own (1992) and Informant (2009). Since her acting career, which began in 1979, she has been nominated twice for an Academy Award for Best Supporting Actress and has co-starred with celebrities such as Harrison Ford, Jack Black, Lisa Bonet, Sigourney Weaver, and Matt Dillon. Here are the 8 highest-grossing movies of Joan Cusack’s career.

Unlike her brother, John, who has excelled as an actor, writer, and director in mainly live-action films, with the exception of 1997’s Anastasia starring Meg Ryan, Joan Cusack has secured herself a niche in the animation movie department. As a matter of fact, the highest-grossing movies she’s been featured in have all been computer-animated films, chief of which is Toy Story 4 which was released in 2019. As the fourth installment of the cinematic success which began in 1999, the film’s star actor’s all reprise their roles, beginning with Woody (Tom Hanks), Buzz Lightyear (Tim Allen), and Jessie (Joan Cusack). The other toys such as Mr. Potato Head (Don Rickles), Ducky (Keegan-Michael Key), Bunny (Jordan Peele), Duke Caboom (Keanu Reeves), and many others have all been donated to their new owner, Bonnie (Madeleine McGraw). The film was ultra-successful, grossing $1.073 billion against a $200 million budget.

Joan Cusack won her first Primetime Emmy Nomination in 2015 for her role of Sheila Jackson in the Showtime comedy, Shameless, also starring William H. Macy and Emmy Rossum among others. She lent her voice to the Toy Story 3 comedy in 2010 which saw the toy’s owner, Andy (John Morris) preparing to leave for college at 17 years old. Andy intends to take Woody (Tim Allen) to college with him and put the other toys, namely Buzz Lightyear (Tim Allen), Jessie (Joan Cusack), Mr. Potato (Don Rickles), and Slinky Dog (Blake Clarke) among many more who are mistaken for trash and narrowly escape the dump truck. They are taken to Sunnyside Daycare where they encounter a new host of toys, including Lostso the Beat (Ned Beatty), Barbie (Jodi Benson), and Ken (Michael Keaton). Again, Lee Unkrich directed a masterpiece that grossed $1.068 billion worldwide.

Every 90’s baby has memories of the Toy Story Movie that came out in 1995 and subsequently Toy Story 2 which came out in 1999. To say the franchise was a box office success would be modest of its achievement – each movie got progressively better results. Releases by Walt Disney and Pixar Animations, The film follows a still child-like Andy Davis (John Morris) who keeps Woody (Tom Hanks) as his favorite toy. But when Woody ends up outside at a toy yard sale while rescuing a toy penguin named Wheezy, a greedy toy collected named Al McWhiggin (Wayne Knight), which is where Woody meets Jessie the Cowgirl (Joan Cusack), Bullseye the horse, and Stinky Pete the Prospector (Kelsey Grammer). Buzz (Tim Allen), Mr. Potato Head (Don Rickles), Slinky Dog (Jim Varney), and Rex (Wallace Shawn) go in pursuit of their friend. The film grossed $511.35 million at the box office.

The film is centered on a young and attractive young lady named Maggie Carpenter (Julia Roberts) who has become given the infamous name “The Runaway Bride” as she has a track record of leaving her fiances at the altar on their wedding day. Her current love interest, Bob Kelly (Christopher Meloni), is determined to marry Maggie this time. On the other hand, Ike Graham (Richard Gere) is a columnist from New York who catches wind of the story from a disreputable source, writes an article about her, and is fired for misinformation. However, he is allowed to redeem himself by writing an in-depth piece on Maggie and travels to Maryland where she lives. After sourcing her friends and past finances for information, he spends time with her personally and learns she isn’t a bad person. On the day of Maggie and Bob’s wedding, Bob walks her down the aisle so as to calm her nerves, while Ike stands in his place as the groom. When she gets to Ike, they kiss in front of Bob and the congregation, stating their feelings for each other. After one last runaway, they eventually get married. Joan Cusack’s role was that of Maggie’s best friend, Peggy Flemming. On a budget of $70 million, the film grossed a whopping $310.13 million.

Joan’s other animation box office success was Walt Disney’s Feature Animation computer-animated science-fiction movie, Chicken Little. The movie was released in 2005 and begins when Ace Cluck (Zack Braff), also known as Chicken Little, rings the school bell and frantically warns everyone that the sky is falling. His father, Buck Cluck (Gary Marshall), assumes that the “piece of sky” he saw was just an acorn, and this makes Chicken Little the laughingstock of Oakey Oaks town. He grows to be an outcast among his peers, and his only friends are Abby “Ugly Duckling” Mallard (Joan Cusack), a cowardly pig named Runt of the Litter (Steve Zahn), and a goldfish named Fish Out of Water (Dan Molina). After winning a baseball game at his school, he is praised by his townsfolk. Soon after, he realizes the “acorn” that hit his head is a fallen hexagon piece from a camouflaged alien spaceship. The aliens pursue Chicken Little and his friends, and he rings the town bell again. But this time, the aliens leave behind their child, Kirby. Realizing he has been speaking the truth, his father now regains trust in him and they return the alien child, hailing Chicken Little as a hero.

When a bachelor and playboy, child psychologist Samuel Faulkner (Hugh Grant) finds out that his romance with ballet teacher Rebecca Taylor (Julianne Moore) takes a more serious turn of events when she reveals she is pregnant, Samuel is left unsure of his next move in the relationship. He was opposed to Julianne’s proposal of being a family prior to the revelation of her pregnancy. Seeking direction on his dilemma, his forever-single friend, Sean (Jeff Goldblum) tells him to move on. His fears of a family mount after seeing his other friends, Marty and Gail Dwyer (Tom Arnold and Joan Cusack), and their three unruly daughters, he rejects the idea even more. When he attempts to move on, he finds that Julianne and the pregnancy are still heavy on his mind. Julianne moves in with Marty and Gail for support, and as the due date draws closer, Samuel realizes that he needs to take responsibility for his actions. He sells his Porsche, buys a Ford Explorer, and plans to work things out with Julianne, who is revealed to be having a son. The movie grossed $138.48 million at the box office.

There probably isn’t a movie where Jack Black is the lead actor where he isn’t acting erratically – it’s one of his most recognizable traits! In the 2003 comedy film, School of Rock, Jack Black’s role of rock band guitarist is the perfect excuse to act out. The film focuses on Dewey Finn (Jack Black) who is the lead vocalist and guitarist for the rock band, No Vacancy. After his erratic actions end the previous night’s performance, his band members replace him as the lead guitarist. In addition, his roommate, Ned Schneebly (Mike White), and his controlling girlfriend Patty Di Marco (Sarah Silverman) confront him for his overdue rent. As he begins selling his equipment to come up with the rent money, he receives a call from Rosalie Mullins (Joan Cusack), the principal of Horace Prep school, who called to follow up on a substitute teacher’s position for Ned Schneebly. Finn seizes the opportunity, impersonates Schneebly, and gets the job as a music teacher. His plan is to form a new band using his pupils and have them audition for Battle of the Bands contest. Black’s unpredictable actions alone were enough to gross $131.94 million at the box office.

In one of Mark Wahlberg’s more heartwarming movies, Instant Family, a family-comedy drama released in 2018, we are reminded that the purest love sometimes doesn’t come from blood relatives but from strangers. The film begins with a married couple, Pete and Ellie Wagner (Mark Wahlberg and Rose Byrne), who consider adoption. After enrolling in foster care, they meet 15-year old Lizzie (Isabela Merced), 10-year old Juan (Gustavo Escobar), and 6-year old Lita (Julianna Gamiz). The children’s mother, Carla, is a drug addict who is in prison. After moving in with the Wagners, life becomes a little hectic. Juan is hyper-emotional, Lita only eats chips and Lizzie comes in late after partying with friends. But Lizzie, who has been apprehensive, warms up after seeing Pete and Ellie care for her younger siblings. To make matters worse, Pete finds out a 22-year old janitor at Lizzie’s school has been sharing nude pice with the teenager, and he gets arrested for assaulting him. When Carla is released from prison, Lizzie wants to live with her, while Juan and Lita prefer staying with the Wagners. When it’s revealed that Lizzie’s mother is using drugs again and blames Lizzie for making them available to her, she changes her mind and decides to stay with Wagners, making their adoption official. Joan Cusack played the role of Mrs. Howard, a social worker. The film grossed a total of $119.73 million.