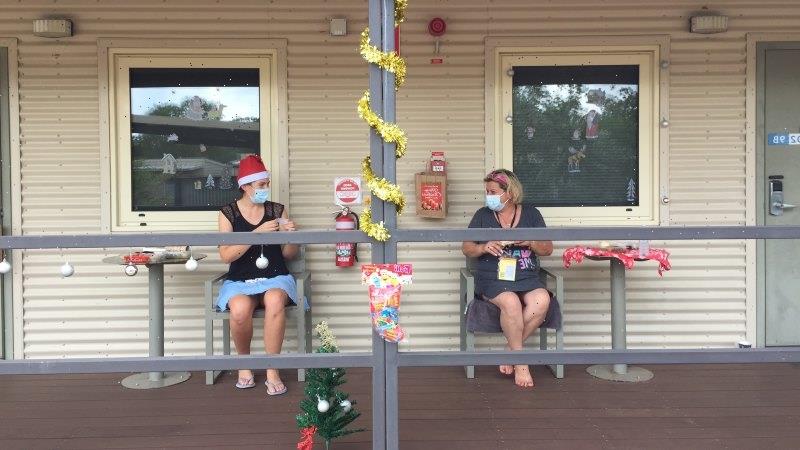 No one wants to spend a birthday in quarantine.

Kmart. Better still when you can thank them in person as you sit outside in the sun to enjoy it.

That was the experience of our long-absent family member who recently managed to join a government-assisted flight back from London and was then gratefully decanted into the quarantine facility at Howard Springs, near Darwin. 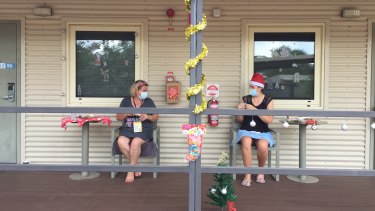 This former worker’s camp, with its single storey huts and open-air walkways, is unquestionably the closest thing Australia has to a gold standard facility for isolating returnees: fresh air, limited but precious access to the outside world (she was allowed to walk to the laundry every three days) and opportunities for socially-distanced companionship if you happen to be travelling solo.

Most importantly there is no need for security guards or other staff to enter or sit in stuffy corridors where the invisible enemy could be hanging in the air, awaiting the slightest opportunity to smuggle itself out. There has not been a single breach of quarantine from Howard Springs.

Two events in recent days have been the latest lightning rod for those agitating for expansion of safer alternatives to hotel quarantine.

The first was Canberra’s decision to temporarily shut off flights from India, until at least May 15, because of the steeply rising proportion of passengers from that country arriving with COVID-19.

The second was evidence two days ago of a fresh leak from Sydney’s hotel quarantine when a man his 50s popped up as a mystery case, having had no known contact with the quarantine system. He’s since been found to share the same genomic sequence of the virus as a traveller who arrived from the US in late April, though contact tracers are scrambling to find the missing link in the chain of transmission between them.

The decision to place a sudden halt on Indian flights sparked widespread outrage, not least because of the way the late night announcement explicitly invoked the spectre of hefty fines or imprisonment for those who breached the ban.

The strength of the backlash forced Prime Minister Scott Morrison to walk the rhetoric back several days later with a declaration that there was effectively “zero” chance such penalties would be applied.

Repatriation flights from the subcontinent will now resume from the middle of this month, Morrison announced yesterday, saying the “pause” has had the desired effect of reducing the COVID-19 caseload inside Howard Springs.

But there will be stringent pre-boarding testing of those seeking to return. “We are doing it safely, to prevent a third wave here in Australia, but we are doing it sustainably as well,” he insisted at a media briefing following national cabinet.

The government’s now rushing to put the final touches on the promised expansion of Howard Springs from 850 to 2000 places, as recommended last year by former senior public servant Jane Halton, while encouraging the states – particularly NSW and Queensland – to receive some Indian repatriation flights as well. 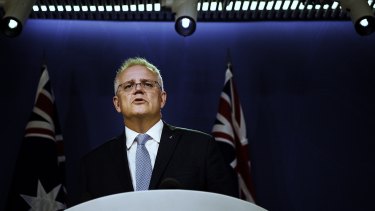 Scott Morrison’s controversial ban on travel between Australia and India will end next week. Credit:Kate Geraghty

Politically popular as hard border policies have been, the heart-rending images of India’s COVID crisis have engendered deep unease, not least in the medical community.

Dr Michelle Ananda-Rajah, a Victorian infectious diseases expert and co-founder of Healthcare Workers Australia, says endeavouring to place even greater barriers in the way of citizens seeking sanctuary back home is unconscionable.

“We are now in a situation where there is a humanitarian and moral imperative to bring our people back, not just from India, but from everywhere” she says.

“Those 36,000 or more people [still stranded abroad] have gone through enough financial and emotional hardship. Now their risk of acquiring COVID in many parts of the world is actually going up, unless they are in one of those really high vaccinating countries like the UK and the US.”

Yet keeping the virus bottled up inside quarantine facilities while our national vaccination rate is still so low remains the great challenge.

It is hotel ventilation systems that most worry those in the medical and occupational health fields pushing for change.

She points to the now internationally accepted consensus that COVID-19 can spread via aerosols (tiny droplets that sit suspended in air for minutes, or even hours) – a consensus reinforced with updated advice from the World Health Organisation on April 30. 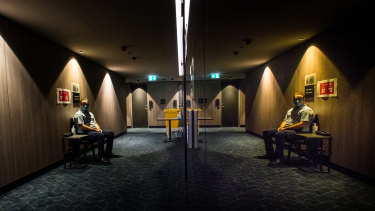 A quarantine support officer at his station near the lifts at the Four Points hotel. It is hotel ventilation systems that most worry those in the medical and occupational health fields pushing for change.Credit:Jason South

But it’s advice she says Australian authorities, particularly the federal government’s Infection Control Expert Group, have been too slow to accept. Professor Raina MacIntyre from the Kirby Institute labels the attitude of federal authorities “airborne denialism”, a charge the government denies.

“At the moment every time you open a [hotel room] door, aerosols can come out of that occupant’s room into the corridor and we have seen many hotels that don’t have independent ventilation systems within the corridors, so contaminated air is building up in those environments,” Cole says.

If that can’t be mitigated through engineering, then “really the lowest risk to Australians right now is to move towards the Howard Springs model”.

Epidemiologist Professor Mike Toole from Melbourne’s Burnet Institute agrees and would like to see a Howard Springs – or something similar – in every state and territory.

He counts at least 20 leaks of the virus from hotel quarantine in Australia since the start of the pandemic, often triggering snap lockdowns, border closures or other forms of social restriction.

Globally, Toole says, the pandemic has never been worse. “Only 2 per cent of the vaccine doses that have been administered so far have been in the 92 poorest countries in the world,” he says. “Unless there is a miracle and we have a lot more vaccine than we have at moment, I can’t see us being safe at least until 2024.”

The Australian Medical Association has also used the furore over the India flights suspension to mount a fresh push against vulnerabilities in the hotel quarantine system. The WA government recently announced it was dropping three hotels from its quarantine program because of ventilation risks, using that to justify a cut in its international arrivals program.

“These facilities [hotels] were never designed for the purpose they’re being used for. There will be an ongoing risk no matter what controls are put in place. And we’re going to need quarantine for many, many months and probably years into the future looking at how this pandemic is rolling out around the world… we need facilities similar to the way that Howard Springs is set up around our major cities so that we can bring Australians safely home.”

The federal government, he said, should “put their hand in their pockets” and have such facilities “ready for use as early as next year”.

Ananda-Rajah thinks the country can’t wait that long. She says authorities should be looking at stop-gap measures if necessary such as caravan parks, army barracks, even tents. 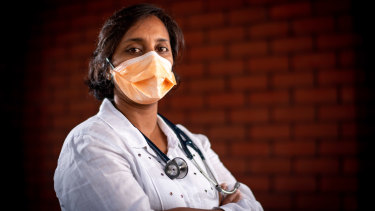 “We need to be looking at creative solutions… on the outskirts of major cities, near hospitals, and also near a workforce that is capable of servicing these sorts of areas.”

The NSW and federal governments continue to insist hotel quarantine has been remarkably effective overall – “a 99.99 per cent success rate” the prime minister says – and the Berejiklian government is adamant it won’t be considering alternatives. But Victoria, Queensland and Western Australia have kept up the pressure for new approaches.

WA premier Mark McGowan wants Canberra to look at Christmas Island or Curtin airbase near Derby. Morrison slapped this down on Friday, saying defence and immigration facilities were “not there just sitting idle” and would not be made available.

Queensland is still backing a proposal from the Wagner family to construct a facility near the privately-run Wellcamp airport outside Toowoomba, with Premier Annastacia Palaszczuk fuming this week that she can’t get a “simple answer” from Canberra on whether it would allow international passenger flights to land there.

Around the world: quarantine rules

Morrison though is sounding increasingly receptive towards plans being drawn up by Victoria for a proposed 500-bed, purpose-built facility in Melbourne’s north.

“That is something we are closely considering,” the prime minister said on Friday.

Not everyone, even in the health community, believes the country should rush headlong into building new quarantine facilities as long as there’s no clear endgame for emerging from our national cocoon.

“I think the feds and the states need to sit down and have a very serious conversation about an exit strategy,” says one senior insider. “This notion that we keep quarantining people forever and a day – we can’t continue to run the country like that.

“At some point the government has to say, at what point do we have enough vaccine coverage to actually open the borders? Can we open them slowly, who would we let in? Until you have done that you don’t know whether it’s [a good idea] to actually go and build additional quarantine facilities.”

The time may come when other alternatives – such as well monitored home quarantine – could better supplement existing facilities once the population is more widely vaccinated.

Professor John Kaldor of Sydney’s Kirby Institute says the chief focus now should be on making the quarantine facilities we have as watertight as possible.

“There is no question that there has to be an exit strategy but it will have to be staged,” Kaldor says.

“You can’t go to purpose-built facilities overnight. So no matter where we ultimately go with purpose -built facilities, we have got a number of months to make sure our current system, which has been steadily improving, is made as effective as it can be.”

Cole and Ananda-Rajah are urging, for a start, the uniform adoption of fit-tested N95 respirators throughout the quarantine system and a nationally consistent regime across all states and territories.

Halton, who chairs the international Coalition for Epidemic Preparedness (CEPI) says “hotel quarantine has served us well so far”, though Howard Springs has also provided “a very good model”.

Ultimately, she adds, “it is important to consider how long we think we will need to be quarantining … people coming into the country, and on that basis, make an assessment about whether or not having additional facilities constructed makes practical and economic sense.”

For now Australia’s tough quarantine system remains both its strongest defence against the virus and its Achilles heel. At some point we will have to find a way to gingerly resume more open contact with the world.

Our Morning Edition newsletter is a curated guide to the most important and interesting stories, analysis and insights. Get it delivered to your inbox.

05/07/2021 lifestyle Comments Off on Testing our defences: is hotel quarantine the nation’s Achilles heel?
Recent Posts