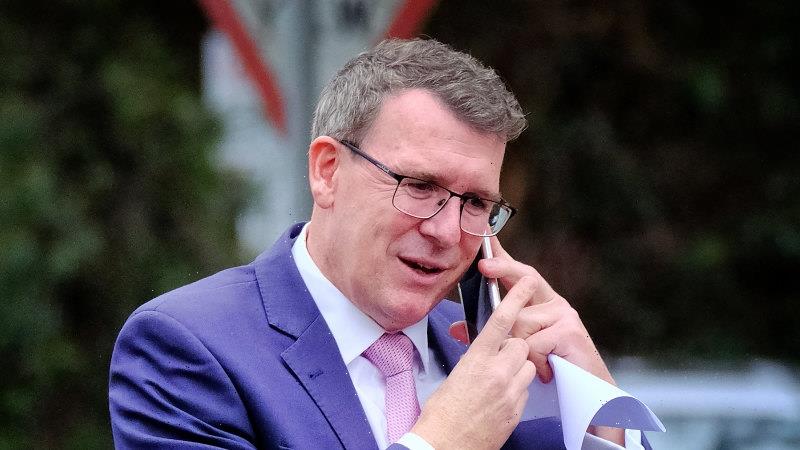 After searching for him for weeks, The Age and Sydney Morning Herald had finally tracked him down to a citizenship ceremony in his electorate of Aston. 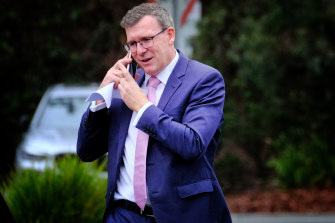 It was to be one of the rarest moments in this election campaign: an opportunity to scrutinise the elusive minister and his policies. Instead, he ignored questions when approached on his way in to the community centre.

“Hi, what’s wrong?” Tudge asked as The Age and Sydney Morning Herald’s reporter and photographer approached. After identifying ourselves, the Member for Aston responded: “Oh, right. A, I’m on the phone, and B, I’m going into this [event].”

After 42 days of election campaigning, Tudge is yet to hold a press conference, has issued no policies for his portfolio, and has conducted just one interview, with Sky News, which door-stopped him at a pre-poll booth earlier in the week.

Despite telling Sky News he would return to the cabinet as education minister if the Morrison government is re-elected next Saturday, and appearing in a video circulating on WeChat stating he was education minister, Tudge has declined to debate Tanya Plibersek, Labor’s education spokeswoman.

During the ceremony, security guards at the civic centre asked The Age and Sydney Morning Herald’s reporter and photographer to leave, threatening to call the police, accusing them of “harassing people”. (They only attempted to speak to Tudge from outside the civic centre, as he entered and exited the event.)

At the end of the event, as people were leaving the civic centre, a man drove Tudge’s car, which had been parked a few hundred metres from the Knox Civic Centre, to the venue’s entrance.

Leaving the building later on Saturday afternoon, Tudge again refused to stop to answer questions, instead saying: “It was a great ceremony with 130 people who became citizens, which was lovely, and I’m now going to go see my dad who’s in a nursing home.”

Tudge stood aside from cabinet in December after his former lover and staffer Rachelle Miller accused him of being emotionally abusive and at one point physically abusive. He has denied the claims and two inquiries have not made findings against him.

Tudge has highlighted that a first inquiry by law firm Sparke Helmore made “no adverse findings” against him. The second inquiry found there was insufficient evidence to support a finding, but Tudge said he was not seeking to return to the frontbench during this term of parliament to instead focus on his health, family and electorate. 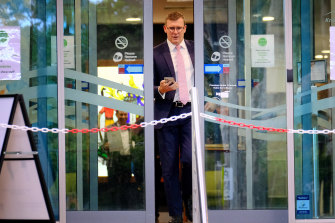 During the final leaders’ debate last week, broadcast on Channel Seven, Prime Minister Scott Morrison was asked about the status of Alan Tudge, who stood aside as education minister late last year. Morrison said he remained a minister and would return to the portfolio after the election.

On Friday, The Guardian published an interview circulating on WeChat of Tudge speaking out against “toxic gender ideology” and assured young migrant families they knew what his “views as education minister” were.

The video is uploaded by Au Life Life, an account run by one of Chisholm Liberal MP Gladys Liu’s volunteers. A Chinese-Australian man in the video, identified as Marcus, said families were worried about falling NAPLAN standards, “toxic gender ideology”, and “the woke thing”.

He congratulated Tudge for “defending” the education system from the infiltration of gender ideology and woke culture.

“Thank you so much Marcus, that’s very good of you,” Tudge said.

“Our standards have slipped, so I’m concerned to ensure Australia is back amongst the top countries in the world as far as education standards are concerned. But equally, the values which are imparted through our schooling system reflects the mainstream values of Australia.”

The man in the video asked Tudge what young families can do to “safeguard and protect” education. The Aston MP responded parents should pay close attention to what their children are being taught, and if they have concerns about the standards of education, to raise them.

“The second thing would be to choose your school carefully, different schools have different values which are imparted, and it should reflect the values which you hold dearly in your own family,” Tudge said.

“And perhaps thirdly I would say, and with an election coming up, think carefully about who you will vote for. Certain political parties, my political party, the Liberal Party, you know what my views are as the education minister. Understand the views of other political parties because they are not always the same.”

Cut through the noise of the federal election campaign with news, views and expert analysis from Jacqueline Maley. Sign up to our Australia Votes 2022 newsletter here.