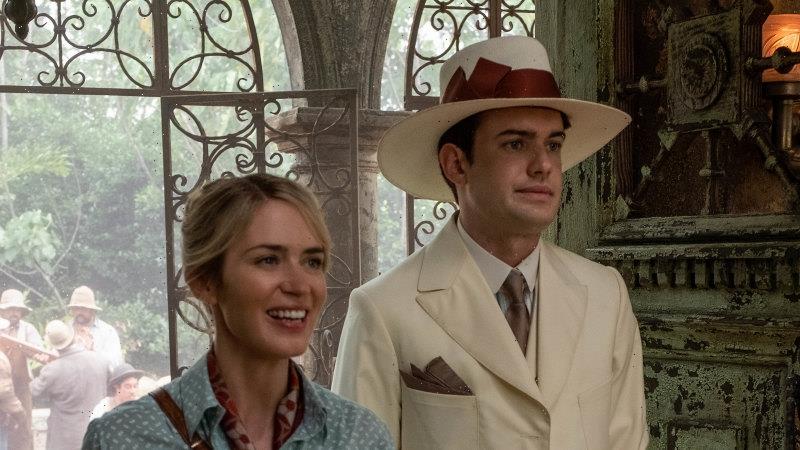 Jungle Cruise is actually a jungle cocktail. The African Queen, the Indiana Jones movies, Romancing the Stone and Angelina Jolie’s Lara Croft have all been tossed into the mix but the main ingredient is Disney’s theme park ride, which made its debut at Anaheim in 1955.

It’s the inspiration for a blithely uninhibited adventure story set largely on the Amazon River. 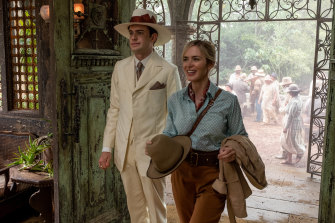 Jack Whitehall is Macgregor and Emily Blunt is Lily in Jungle Cruise.

Stirring it all up is Dwayne Johnson, formerly known as The Rock, and that’s a bonus. Of the screen’s few self-deprecating action heroes, he’s the most engaging – Harrison Ford without the grumpiness.

The action takes place in 1917 and like so many colonial narratives about far-flung explorations, it starts in the venerable headquarters of London’s Royal Geographical Society. Dr Lily Houghton, an intrepid scientist and explorer, has smuggled herself into the society’s offices and is rifling through its files in search of evidence of a legendary Amazon tree said to possess extraordinary healing powers.

She’s played by Emily Blunt, who soon proves her fitness for the job with an acrobatic encounter with a library ladder, a stunt forced on her by the intrusion of the movie’s villain, Prince Joachim, a fascistic German prince who’s also after botanical information.

From here, we’re swiftly transported to the Amazon with Lily and her reluctant travelling companion, her brother, McGregor (Jack Whitehall). They hire Johnson’s Frank Wolff, a local steamboat captain, with an irrepressible fondness for lame puns, to take them upriver. And the bantering begins.

The director is Spanish-American film-maker Jaume Collet-Serra whose experience with horror movies and Liam Neeson thrillers doesn’t necessarily connote a sense of humour. But he takes care to observe the rule essential to making this kind of thing work – that those assigned to carry it off don’t condescend to their material.

Everybody here understands that very well – especially Blunt and Johnson, who get better the more absurd the plot becomes. Perhaps their greatest achievement is a lengthy underwater sequence that gives new meaning to the word, “breathtaking”.

Whitehall is a great asset as the fastidious McGregor, who arrives with a dozen suitcases because he believes dinner is only worth if one is wearing black tie. In contrast, Blunt makes do with boots, a safari suit and a solar topee and looks absolutely fine.

Paul Giamatti, however, dresses up his role, successfully accessorising it with a Brazilian accent, a gold tooth and a pet cockatoo. He’s cast as Nilo, a Peter Lorre-type character whose fleet of tourist boats is trying to put Frank’s decrepit craft out of business.

Frank, too, has a pet – Proxima, a tame jaguar that he brings out to thrill the tourists. She is actually a CGI creation from New Zealand’s WETA Workshop and her snarl is wholly convincing.

The same goes for Prince Joachim – played with great spirit and a lot of gloating by Jesse Piemons. The Prince makes a timely re-appearance upriver, wearing full dress uniform and looking as if he’s just stepped out of a Ruritanian romance. In keeping with the movie’s ardent embrace of inventive means of transport, he’s travelling in a German submarine equipped with a torpedo, which he employs with great enthusiasm.

I wasn’t completely won over by the film’s second half which goes over to fantasy with a new cast of CGI creations but it’s done with a lot of verve and wit and Johnson and Blunt still manage to keep a straight face. They also keep you on their side all the way, partly because they have no difficulty in persuading you that they’re having a lot of fun together.

It’s a film that looks as if it has the makings of a franchise but these days, when blockbusters are often being denied the boost they get from a wide theatrical release with its attendant sense of occasion, I’m not sure. Then again, it does have The Rock to lean on so anything could happen.