For Daniel Andrews, this weekend was supposed to be all about Sunday.

His appearance at the hotel inquiry was supposed to happen on Wednesday, the fallout dealt with on Thursday and Friday, and the weekend left clear for celebration – the first announcement about opening up again after the long, dark, stage-four, COVID-abnormal winter. 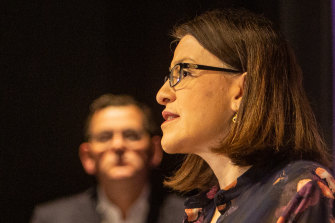 Daniel Andrews watches his then health minister Jenny Mikakos at the podium.Credit:Scott McNaughton

Instead, due to a scheduling issue at the inquiry's end, the Victorian Premier spent his Friday afternoon on the virtual witness stand and his Saturday dealing with the sudden, though not shock, resignation of his health minister. He had to choose and swear in her replacement and deal with a media pack keen to pick through the entrails.

It was a disappointing outcome for him, perhaps, but fascinating and revealing for the rest of us. These events have given us an extraordinary window into how the policy sausage is made in Victoria – how decisions arrive fully formed and apparently by osmosis, how poorly briefed and incurious our ministers sometimes are, how they slide deftly around blame, and how many warnings can be ignored in the face of impending catastrophe.

Mikakos resigned because she had no choice. The evidence was just too damning.

She suggested in her statement, though, that it was because there were parts of Andrews' evidence to the inquiry that "I strongly disagree with". It would under those circumstances have been impossible for them to sit together around the Cabinet table.

Trying to explain her resignation forced Andrews himself into some rather odd positions.

After announcing that he had not pushed for it but that it had nonetheless been "appropriate," a reporter pointed out the obvious: "Yesterday she had your confidence and today you say it's the right thing she has resigned. What has changed?"

"Well," replied Andrews, "the Minister has tendered her resignation … All my Ministers have my confidence. Miss Mikakos is not a Minister any longer."

So did Jobs Minister Martin Pakula and Police Minister Lisa Neville enjoy a similar level of tenuous confidence from their Premier? "Absolutely." 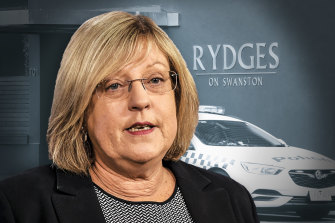 And what if they too resigned for whatever similar shortcomings they were guilty of? Would they then lose his confidence? "2020 is a very strange year," Andrews said, "but I don't think I'll be getting into that sort of thing."

The fact is that, if either of those two ministers were to jump or be pushed, it would most likely have happened on Saturday. That was the day to clear the decks. That they have survived until "good news" Sunday means they will live to fight another day.

Mikakos's demise had been inevitable from the moment Andrews told the hotel quarantine inquiry she was accountable for what had gone wrong. But the biggest sleight of hand relating to accountability involves Andrews himself. In the same line that damned Mikakos, he said, "as Premier and chair of the Crisis Committee of Cabinet, I regard myself as being ultimately accountable".

It's a line he uses repeatedly in his public appearances too. But what does it actually mean?

In practice, it means he appears every day in front of the media. Every. Single. Day. And he answers every single question, regularly berating journalists for their hard-to-break habit of talking over each other to get their question in.

Stage-four Victoria is the Daniel Andrews show. He is the best communicator in the government by far and one of the best in the country. His presence dominates the narrative of this crisis not just in the public eye, but in the internal forums of government. His office, his department, are similarly dominant.

"This is the most centralised government I've ever seen," said one insider.

So if the real decisions are being made in such a small circle, and Andrews assures us he is accountable, should he also quit? Would that, as he said of Mikakos, be "appropriate"?

"I don't run from problems and challenges. I've got a very important job to do … and I'm going to get it done … I am focused on getting on and making sure that we have got very positive news for people tomorrow," he said on Saturday.

He wants us all focused on the future, not the past. He is also dropping broad hints about "truly unprecedented" spending for recovery in the October budget.

"Look over there at the good stuff," he's saying, not at the accumulating internal scars of sackings, humiliations and egregious mistakes.

But as the inquiry has progressively laid bare the problems at the heart of the Andrews show, it's beginning to look like an outfit held together by spit, string, and the incredibly powerful presence of Daniel Andrews himself.

The inquiry has illustrated that fact perhaps more clearly than anything else.

Our weekly newsletter will deliver expert analysis of the race to the White House from our US correspondent Matthew Knott. Sign up for The Sydney Morning Herald‘s newsletter here, The Age‘s here, Brisbane Times‘ here and WAtoday‘s here.

09/26/2020 lifestyle Comments Off on Spit, string and Daniel Andrews holding Victoria together
Recent Posts
We and our partners use cookies on this site to improve our service, perform analytics, personalize advertising, measure advertising performance, and remember website preferences.Ok