Federal authorities have indicted 40 people in what they say is South Carolina’s largest racketeering conspiracy case in history, stemming from four state inmates orchestrating hits and trafficking drugs by using contraband cellphones while behind bars. The U.S. Attorney in South Carolina called it a “sprawling criminal enterprise.”

The 147 counts in the indictment range from drug and firearm charges to those related to a murder, a kidnapping and two drive-by shootings, prosecutors said Thursday at a news conference outside of Broad River Correctional Institution in Columbia. The crimes occurred between 2017 and this year.

Prosecutors allege that all defendants, which include men and women, are members of or affiliated with a gang known as the Insane Gangster Disciples, a branch of a nationwide group called Folk Nation that has been operating in South Carolina for years.

Prosecutors say the purpose of the gang was to make money through drug trafficking, kidnapping and smuggling prison contraband and other means, as well as maintain power using threats and violence. The gang also is accused of aiming to establish safe houses and provide money for members dealing with the police or incarceration.

“To anyone who would try to harm the people of South Carolina with violence, intimidation or extortion, we are coming after you wherever you are,” said U.S. Attorney for South Carolina Peter McCoy. “Neither pandemic nor prison walls will provide refuge.” 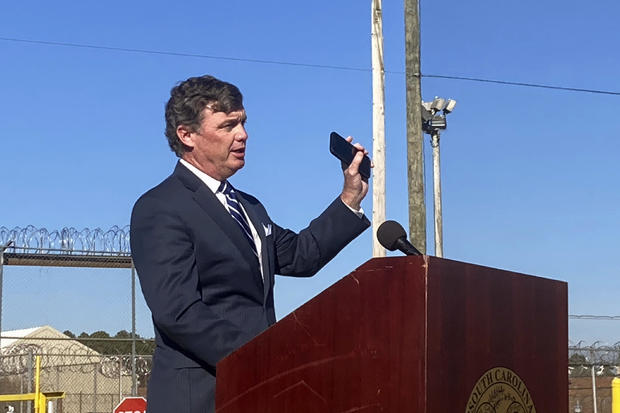 Authorities also said they seized about 40 kilograms of methamphetamine estimated at a $40 million value, as well as some heroin and fentanyl. Police also seized more than 130 firearms during arrests of the defendants, though none of the guns were taken from prisons.

Prosecutors said four men who were locked up in South Carolina facilities during the time of the crimes were instrumental in orchestrating the international drug trafficking operation and other activities outlined in the indictment. Of the four, two — James Robert Peterson and Juan Rodriguez — are currently in South Carolina prisons. Another, Edward Gary Ackridge, is in the Greenville County Detention Center and the fourth, Matthew J. Ward, is in a federal prison.

Among the accusations detailed in the 101-page indictment are drug sales and disputes over drug debts, multiple gunpoint confrontations, one defendant leading police on a high-speed chase, one defendant bonding another out of jail in exchange for heroin and a gun, and the murder of an inmate named Kendrick Hoover inside a state prison on gang orders.

Holloway declined to say Thursday whether Dodge, the kidnapping victim, was actually a police informant.

The indictment also provides details on organizational elements of the gang, from imposing fines and written essays on members who violated rules to the regular meetings where gang finances and disciplinary beatings of members were discussed. The indictment notes that most members of the Disciples are white, unlike most Folk Nation-aligned gangs.

The announcement follows state charges announced last week against 29 inmates in a prison riot from 2018 considered the deadliest across the country in a quarter-century. Corrections chief Bryan Stirling blamed that riot, at Lee Correctional Institution in Bishopville, in part on illegal cellphones, arguing that the phones allow men behind bars to communicate unfettered with the outside world and one anther, in some cases committing crimes.

On Thursday, Stirling called on Congress to hold a hearing on the issue, as federal prisons can jam cell signals, but states cannot due to Federal Communications Commission regulations. He said the Department of Corrections had confiscated more than 4,000 contraband phones this year and inmates frequently use the phones to stalk and harass victims as well as extort family members.

The various defendants are charged under federal racketeering law. If convicted, most of the defendants could face life in prison.

The effort involved dozens of investigators from multiple federal, state and local agencies, and took more than three years. The investigation will be ongoing for the foreseeable future, Holloway said.