Sophie, Countess of Wessex, 55, married Prince Edward in 1999 in Windsor Castle. Since then, the couple have kept their lives quite private but are seen out on various royal outings. Sophie will also often attend engagements on behalf of the monarch.

Sophie has also helped out at several charity events as well as establishing the Women in Business Group in 2003 to help young people transform their futures.

One of her most recent outings saw the royal making flapjacks and decorating Christmas baubles at the Disability Initiative’s Resource Centre in Camberley.

The expert said: “There is a hint here that Sophie’s confidence is growing as a very top tier, frontline member of The Firm, as though stepping back into the royal spotlight after many years of partial obscurity has allowed her to develop her own individual style that is proving to be incredibly popular with the public. 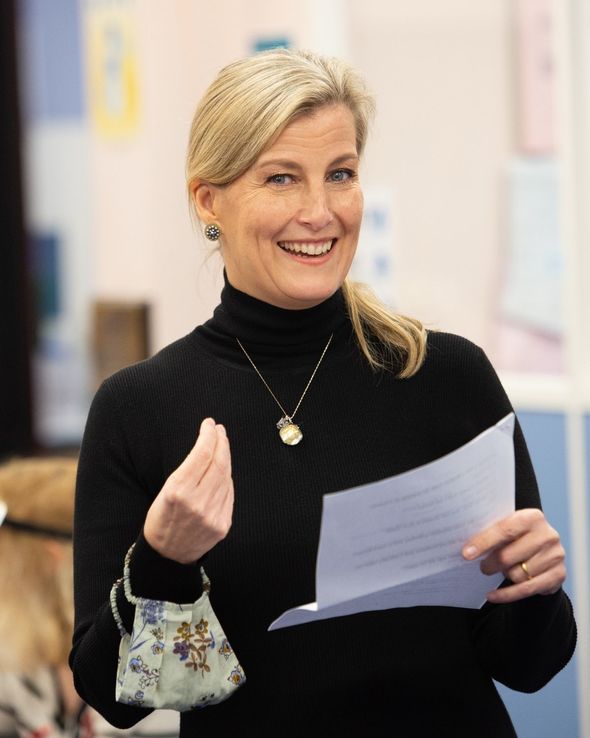 “Sophie also represents the kind of ‘flying solo’ style of behaviour that we’ve always seen from the likes of the Queen and Princess Anne.

“She is rarely seen as a professional double act with Edward and when they are together their body language tends to send out more of a family vibe than the kind of ‘royal power couple’ signals that we get from William and Kate and, previously, Harry and Meghan.”

On her visit, Sophie can be seen listening to others as well as having fun.

Analysing one picture where the royal is listening to others speak, Judi said: “Sophie also seems to have mastered the skill of using several forms of communication at once.

“Here she uses her gestures to show active and empathetic listening.

“By placing one arm across her body in a barrier gesture and fiddling with her necklace with the other hand, Sophie might have been signalling anxiety or a lack of confidence.

“But this actually looks more like a multi-functional ritual where she mimics a less assertive approach to build bonds with the people she is visiting.

“It is a ‘Mirror – pace – lead’ approach where you mimic the people around you to make them feel less intimidated.” 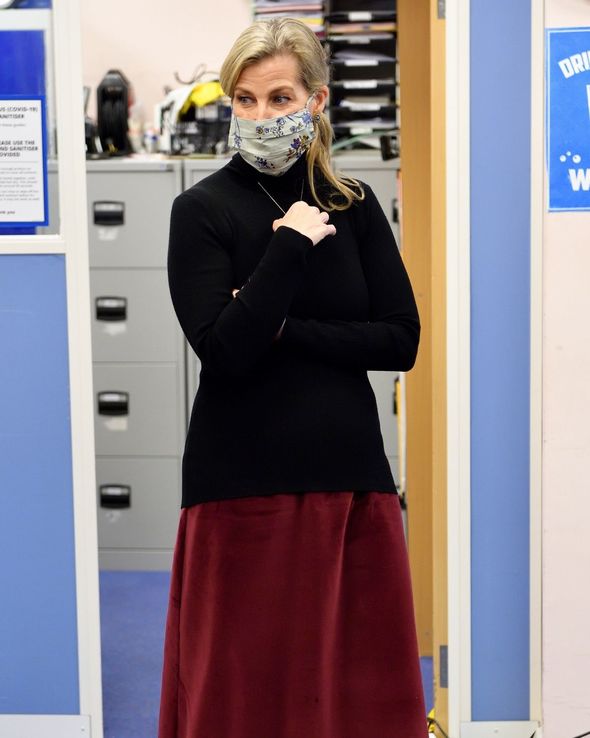 On the day, Sophie can be seen smiling and having fun as well as using several hand-gestures.

The expert explained: “Sophie’s thumbs-up gesture is a colloquial ritual that is symbolic of positivity and enjoyment.”

As Sophie has attended more events over the years, she seems to have become more relaxed and comfortable with her role in the Royal Family.

Looking at a photo of Sophie smiling with her face mask on her arm, Judi explained that she mimics Princess Diana in her actions.

Judi added: “This is a complex ritual that Sophie seems to be aiming straight at the cameras to enjoy a non-verbal joke with them in the way that Diana always used to.

“She performs a ‘hand purse’ gesture that could suggest a comic request for payment if she rubbed the fingertips together.

“Her facial expression shares the joke, with an asymmetric smile that raises the right cheek and narrows the right eye to suggest a knowing look.

“Rituals like this seem to prove Sophie’s growing levels of confidence as she seems to be escaping from any worries about informality and allowing herself to project a more natural look that is more ‘authentically Sophie’.”

12/11/2020 lifestyle Comments Off on Sophie, Countess of Wessex’s body language shows ‘growing levels of confidence’
Recent Posts
We and our partners use cookies on this site to improve our service, perform analytics, personalize advertising, measure advertising performance, and remember website preferences.Ok