An estimated 530 million people around the world watched live as astronaut Neil Armstrong took his first steps on the moon in 1969. This week, Armstrong’s sons are auctioning off many of the iconic astronaut’s personal items, including his flight suit, flags and medallions that were launched into space. The bidding, which begins Thursday, is part of a three-auction series and will feature more than 3,000 items from the Armstrong family collection.

“I think a lot of people have a personal connection with the Apollo program and the moon landing in general,” Mark Armstrong, one of Neil’s sons, said. “Maybe it takes them back to a time in their childhood or even in their adulthood. They remember where they were or there is something they connect with that or maybe it has had an impact on their life in some way… so you just hope that people get positive energy from these things.”

But why sell everything now?

“If we were to pass these things down to our kids they would not know the stories, they would not recognize the connections that we recognized. So that meant that we needed to do something sooner rather than later,” Mark said.

Still, it’s a “bit of a struggle” to let pieces of their dad’s legacy go, said his other son, Rick.

“But you got to look at the bigger picture… hopefully it is going to go to some people that will get inspiration from it,” Rick said.

Avid space memorabilia collector Robert Pearlman says Armstrong’s most prized items, like his spacesuit, are safely housed in the Smithsonian. But he believes the thousands of other keepsakes up for sale will help us understand one of history’s greatest explorers.

“What these pieces are, are the literal nuts and bolts that are left over,” Pearlman said. “He was the most famous person on Earth in 1969 and we know him best when his face was covered. So this allows us to lift that visor and expose who he was through the items that he kept.”

Also included in the auction are pieces of the Wright brothers’ aircraft, which went up with Armstrong and his fellow astronauts in the Apollo 11 mission. Armstrong’s sons say they will use proceeds from the auction to help fund non-profits, charities, and other interests. 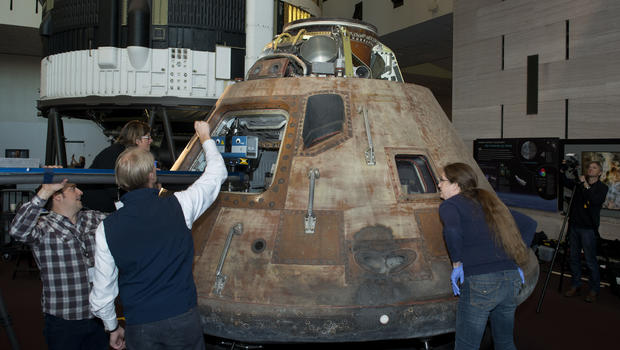