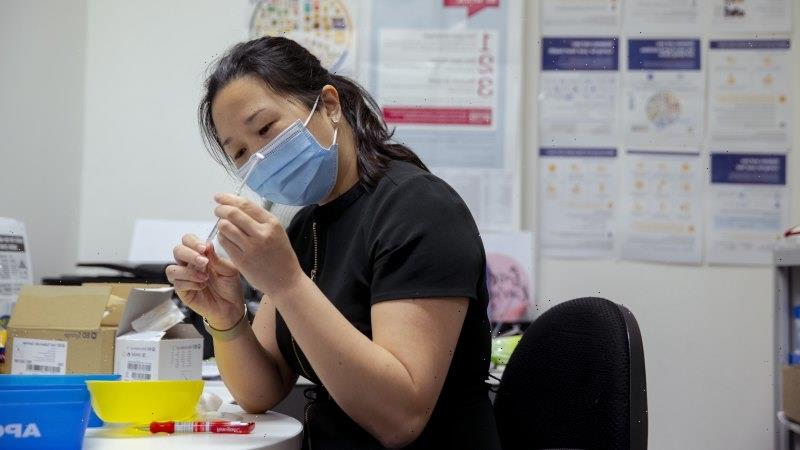 Health experts say the best way to keep children safe from coronavirus is to vaccinate as many of the adults around them as possible, even in areas where more than one-fifth of the population is made up of children aged under 12.

Young children, who will not be eligible for vaccinations this year, are less affected by the Delta variant of the virus even as cases among them rise, so experts say higher adult and teen vaccination rates will not just protect under 12s but will significantly prevent those children from passing on the disease to more vulnerable relatives. 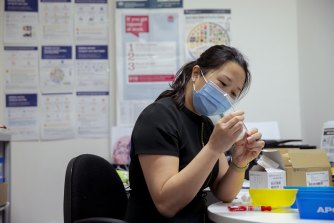 Getting older family members vaccinated is critical in local government areas where 20 per cent or more of the population is aged under 12.Credit:Dominic Lorrimer

Health Minister Greg Hunt promised there will be more than enough doses for young children next year when immunisations are likely to be approved for primary school-aged children.

“As we have said on multiple occasions, we have whole of population coverage for every Australian,” he said.

To date 62.7 per cent of the eligible population aged 16 and over have had one dose, and 38.2 per cent are fully immunised.

Queensland premier Annastacia Palaszczuk courted controversy last week by saying border restrictions would not lift until children had been vaccinated.

Deputy Chief Medical Officer Dr Sonya Bennett said if there are pockets where there are large numbers of young children and the level of vaccination among adults and teenagers is not high the government would push hard to get as many people vaccinated as possible.

“Once we get to 70 and 80 [per cent of the general population fully vaccinated], the vaccination program continues, particularly for those areas where the vaccination coverage might be less,” she said.

Murdoch Children’s Research Institute immunisation expert Associate Professor Margie Danchin said those regions deserve a targeted vaccine push to protect everyone in the community and to give parents the confidence to send their children to school.

“The unvaccinated household members are the ones that are really at risk, it’s not the under-12s,” she said.

“The risk of these primary school kids going to school is yeah, they might get infected, or they might get a mild cold, but they may go home, and then they can cause serious illness in their other household members.“

Parts of NSW among the worst hit in the current outbreak also have the highest proportion of under-12s.

In western NSW, which is currently grappling with the spread of coronavirus, several communities have higher percentages of young children. In Bourke, 21 per cent of the local population is under the age of 12. Children also make up more than 18 per cent of the populations of Lachlan and Coonamble.

Western and south-western Sydney regions also have high proportions of primary school-aged children. In Camden, there are almost 22,000 children under 12, making 20.4 per cent of the local population. There are 71,787 under-12s in Blackdown, while Campbelltown has 18 per cent under 12.

In Victoria, 21.6 per cent of the Wyndham population in Melbourne’s outer south-west is made up of children aged under 12. It also has the highest number of children in that age group, with more than 61,000 zero to 11-year-olds.

The state’s premier Daniel Andrews said many of the state’s 1714 active cases were in younger Victorians. There were 216 cases in children aged 0 to 9, and 232 in those aged 10 to 19, he said on Sunday.

“The age breakdown confirms that this is a pandemic of the unvaccinated,” Mr Andrews said.

Almost half of the local government areas that have the highest proportion of young children are in Queensland. Most of the regions with the highest percentage of under 12s are Aboriginal and Torres Strait Island communities, including Cherbourg (31.3 per cent), Doomadgee (30.1 per cent) and the Northern Peninsula (29.6 per cent).

There are now two vaccines approved for use in children aged over 12 in Australia after the medical regulator approved Moderna’s vaccine for 12 to 17-year-olds on Saturday. The Australian Technical Advisory Group on Immunisation is expected to give advice to the federal government next on how that vaccine should be used in children.

Pfizer has been approved by both the Therapeutic Goods Administration and ATAGI for 12 to 15-year-olds, and those children will be able to book vaccination appointments from mid-September.

Health Minister Greg Hunt said Australia does not need separate paediatric vaccine agreements with either Pfizer or Moderna as the existing contracts for 2022 have more than enough to cover the entire population.

“Children are already covered by the existing contract,” he told this masthead.

The federal government has a contract with Pfizer for 60 million doses in 2022, and with Moderna for a further 15 million doses next year. Both pharmaceutical companies are running trials of their vaccines in children aged six months to 11.

“The trials will confirm both the efficacy and relevant dosage levels,” Mr Hunt said.

“The government needs to explain to people what steps it is taking in relation to that, and I think particularly in relation to the various paediatric vaccines, which are under trial … around the world at the moment,” he told Sky News on Sunday morning.

Professor Danchin said there is robust data from overseas and locally that shows Delta remains milder in children than adults.

More than 50 per cent of cases in under 12s were asymptomatic or mild, she said, so even if younger children did catch COVID, those at greatest risk were any unvaccinated older family members.

“Unfortunately, as we see more infection in children, we are going to see the odd case of severe disease, but the overall proportion of severe disease has not changed with Delta,” she said.

“One of the main strategies to keep them safe is going to be to vaccinate their parents, their grandparents and their teachers, and obviously, the teens.“