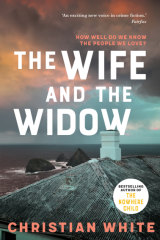 One of the most original crime novels of the year.

The Wife and The Widow

First encounters are telling. We first meet Kate Keddie waiting at the Melbourne International terminal for her husband John to return from a palliative care colloquium in London. He’s flying business class and they’re obviously well off, although Kate is acutely aware that her husband is a troubled man. Abby Gilpin we encounter picking up smelly garbage from a toppled bin on a windswept street on Belport island where her husband Ray runs the not altogether successful business, Island Care, tending the holiday houses of the rich.

In two swift chapters labelled The Widow (Kate) and The Wife (Abby), Christian White establishes the contrasting worlds these women inhabit while launching them on a parallel trajectory that will bring them face-to-face in a remarkable denouement.

As in The Nowhere Child, White’s award-winning first crime novel, there is an initial hook. John fails to arrive and, as we anticipate since Kate has already been identified as the widow, is already dead on Belport Island where they have a holiday home. Although the reader may immediately assume they can see the connection, White is a master of the art of misdirection. Just when you think you have worked things out, he pulls back the curtain to reveal his cunning sleight of hand.

It’s often hard to write about the machinations of a really good crime novel without giving too much away, and this is indeed the case with The Wife and the Widow. It’s one of those books that you recommend to people with the instruction, read it – and then we can talk.  What can be said is that White employs a highly original narrative structure. Having turned the last page, I had to go back to the beginning to work out the contrivance. As he explains in an afterword, the inspiration for this book was the cult TV series Lost, about an aircraft crash on a remote island that drove viewers bonkers as the seasons progressed and the screenwriters spiralled out of control. White evidently belongs to the next generation of crime writers whose inspiration is as much televisual as it is literary.

But he also writes like a dream, and is not above the occasional literary allusion, as the description of Abby’s son Eddie reveals. Standing at the kitchen counter in a blue apron, chopping garlic for a “vegetarian gourmet pizza”, Abby reflects that Eddie will be a good-looking man someday although he is now “passing awkwardly through the Ichabod Crane phase of puberty: gangly limbs and an archipelago of violent red acne across his forehead”.  His sister Lori is also doing adolescence hard, “somewhere around her 13th birthday she had turned calculative and secretive”. But the wise Abby knows that puberty is like a “rising and falling tide: first you drifted out, then you came back in”.

Although both women are insightful about their contrasting experiences of family life, it is Abby who steals the show with her wry humour, and the hobbies that distract her when she is not working in the island’s only convenience store, the aptly named Buy and Bye. Abby is a runner (largely, she concedes, to counteract her unhealthy intake of fat, sugar and booze), and is also an amateur taxidermist who has not quite got the hang of it yet. While her stuffed animals appear to sag and bulge in all the wrong places and are terrifiying in their grotesqueness, Abby consoles herself with the thought that they are “almost human-like in their imperfections”.

Abby’s world is vivid, her family life vibrant and full of colour. Kate on the other hand, lives in a pallid world of privileged restraint. According to her father-in-law, this renders her “vague” and “passive to the point of invisible”, though as White will subsequently reveal, Kate is also tenacious and strong and determined to find out how and why her husband has died. Appearances may be deceptive.

The Nowhere Child was not a fluke. The Wife and the Widow is one of the most original crime novels of the year and White is clearly a rising international star of the now very vibrant Australian crime fiction scene. Prepare to be dazzled.

11/08/2019 lifestyle Comments Off on Sleight-of-hand thriller that will keep you guessing
Recent Posts
We and our partners use cookies on this site to improve our service, perform analytics, personalize advertising, measure advertising performance, and remember website preferences.Ok