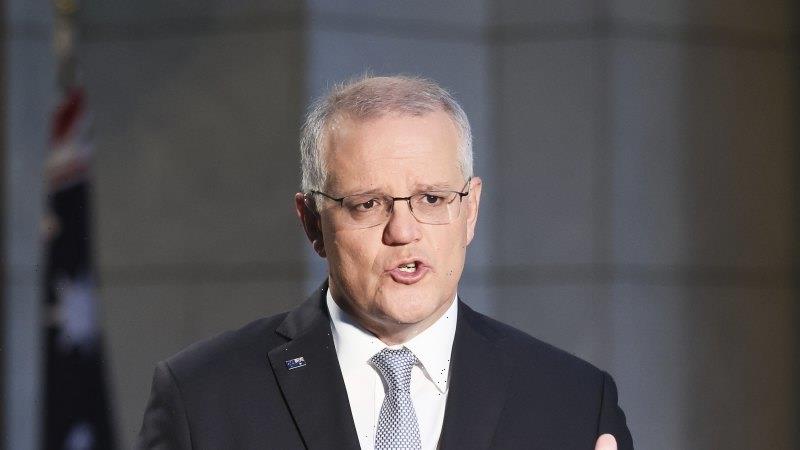 A campaign war-chest worth $13.8 billion will help fund a seat-by-seat battle for power at the election after the federal government set up dozens of funds in Tuesday’s budget to woo voters with promises that range from big energy projects to local community schemes.

The election strategy pours taxpayer funds into programs that do not disclose who will receive all the cash in future years, giving the government the scope to announce some of the grants over the next six weeks when funding promises could help decide the outcome in key seats. 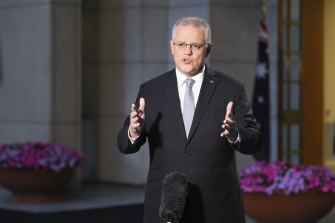 Prime Minister Scott Morrison will have a $13.8 billion war chest to take to the election.Credit:Alex Ellinghausen

The plans range from a $7.1 billion plan for energy projects across regional Australia over more than a decade to local schemes such as $501.7 million for council infrastructure, $29.2 million for “stronger communities” and $67.7 million in community grants that are yet to be revealed.

But the huge spending in the budget sparked claims the government was trying to buy votes after strong criticism from the Auditor-General about grant programs unveiled at the last election including $100 million for sports facilities, $660 million for car parks and $184 for “safer communities” projects.

“The cost of living pressures that are being faced by Australians are real. They’re caused by the terrible events that we’re seeing in the war in Europe,” he said.

“And we’ve seen the Australian economy improve by $100 billion for the budget. And what we’re doing is giving Australians a shield to protect themselves against those cost of living pressures right now with real packages.”

Launching a media blitz to sell the budget before he calls the election, the Prime Minister outlined billions of dollars in new investments while Deputy Prime Minister Barnaby Joyce spoke of spending on regional towns such as Lithgow in NSW and Shepparton in Victoria, both in seats the Nationals want to hold.

Labor leader Anthony Albanese stopped short of calling the policies “bribes” but said they were a “cynical ploy for an election” rather than building the country.

Targeted spending programs were a key part of the Coalition campaign at the last election through the use of spending pledges in local areas to give Mr Morrison and the party’s candidates a positive announcement for voters.

The government programs, funded in the budget in the days before the campaign began, included sports facilities, swimming pools, changing rooms, car parks, and security for religious centres.

Victorian Supreme Court judge David Harper, QC, concluded the misuse of public funds in the car park spending program amounted to a form of corruption in light of findings by the Australian National Audit Office about the spending in Liberal and marginal seats.

“The commuter car parks program certainly appears to be an instance of taxpayers’ money being spent not after an assessment of greatest need but rather with a view to advancing the interests of the government,” he told The Sydney Morning Herald and The Age.

While the Auditor-General singled out the sports grants and car parks for severe criticism, an investigation by the Herald and The Age found wider problems with grants schemes over several years.

But Labor has targeted marginal electorates with its recent promises and 64 per cent of the projects announced in its $200 million community battery program have been in Labor seats.

Mr Morrison could call the election at any point in coming days but told radio station 6PR on Wednesday night he would not call it this Sunday. He waited nine days after the federal budget on April 2, 2019, before he asked the Governor-General to dissolve Parliament on April 11 for an election on May 18.

Some of the biggest new budget measures are aimed at regional Australia at a time when the government is trying to win marginal seats in Queensland and is eyeing the outback seat of Lingiari, which covers all of the Northern Territory except for the centre of Darwin.

The Regional Accelerator Program will spend $2 billion over five years on projects in locations yet to be revealed to support a broad range of activities including manufacturing, infrastructure, skills, training, research, development and education.

Another $2 billion will be spent on the Northern Australia Infrastructure Facility to back major projects outside the south-east states, with the geography extended to include the Indian Ocean Territories of Christmas Island and the Cocos (Keeling) Islands for projects yet to be revealed.

The $7.1 billion energy security and regional development plan will be spread over more than a decade but $1.4 billion of the total is meant to be spent over the next four years on projects in the NT, north and central Queensland, the Pilbara region of Western Australia and the Hunter region of NSW.

This could include electorates such as Lingiari as well as the highly contested seat of Flynn around the Queensland city of Gladstone, as well as seats in the Hunter Valley where the government has claimed Labor is vulnerable.

Energy Minister Angus Taylor said on budget night the policy would spend $300 million on LNG and hydrogen production at Darwin and related projects, $200 million on supply chain projects in the Pilbara region and $100 million for the Port of Newcastle to be ready to export hydrogen.

Mr Joyce listed 20 investment plans for the $7.1 billion policy, including those named by Mr Taylor, but the funding leaves scope for more detailed commitments.

“Turbocharging these regional economies will enable people to get the job they want and to pursue their dreams,” Mr Joyce said.

Some of the cash is meant to be distributed across all parts of Australia evenly, with the Local Roads and Community Infrastructure money going to every council. The Modern Manufacturing Strategy will take competitive applications for grant funding, making it difficult to commit funds before that process.

But many of the budget measures come without details on the final destination of the funding, given they may require applications for grants or the promise of specific funding during the campaign.

The budget includes $20.3 million over three years for grants to groups that plant trees to mark the jubilee of Queen Elizabeth.

“The Audit Office has found problems with 100 per cent of the grant programs it has looked at. This is systemic misspending of public money,” said Han Aulby, the executive director of the Centre for Public Integrity.

”In an election year, with more money being poured into grant programs, we need to tighten scrutiny of government spending. Otherwise, we will see more pork barrelling and more public money wasted,” they said.

“Necessary safeguards include requiring grant criteria to be made public, regular reporting against those criteria, greater Parliamentary scrutiny, and stronger enforcement of the rules.”

Jacqueline Maley cuts through the noise of the federal election campaign with news, views and expert analysis. Sign up to our Australia Votes 2022 newsletter here.