It’s 5:45am and my pathological punctuality means I’ve arrived at the airport so early the check-in desk isn’t even open yet.

I pace up and down, scrambling around in my handbag to make sure I have my passport, wallet and phone. 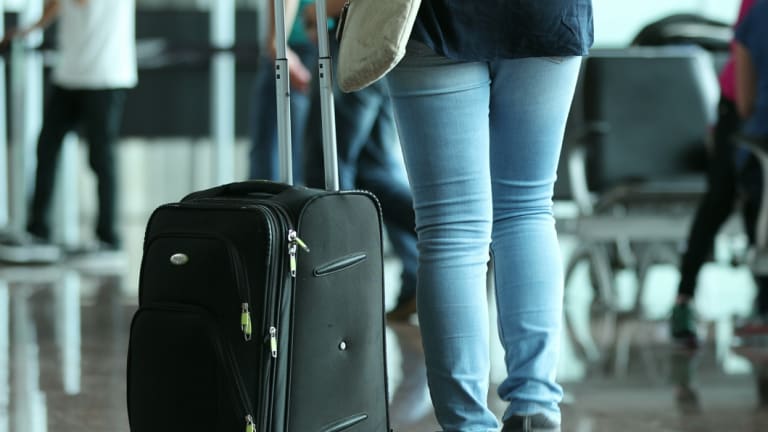 ‘I’m worried my flying anxiety might mean I am viewed as a threat.’Credit:Shutterstock

It is the eleventy-billionth time I have checked since leaving the house.

I hold my suitcase – which I packed a fortnight ago because you can never be too prepared – tightly by my side for fear security will deem it an abandoned bag, forcing the entire airport to be evacuated.

My mind races. What if my case is too heavy? Are batteries considered flammable items? Could my eyebrow tweezers be deemed a lethal weapon?

I glance to my left and spot a portly middle-aged couple in board shorts and singlets, yelling obscenities at each other as they wrestle with a machine that cling wraps their bags in plastic.

Oh god, should I do that? Is that tinfoil hat paranoia? Or a smart way to avoid rotting in a tropical hellhole prison while my life as a drug mule gets turned into a Channel Nine miniseries?

This is a fairly typical account of my thought processes when I have to fly anywhere.

For my chronically anxious brain, there is something uniquely discombobulating about the experience of mass transit.

While I love to travel, airports always put me on edge.

So you can imagine my alarm when I read last week that new technology is developed which will automatically detect “unduly nervous passengers” at airports.

I’m sorry, what? They’ve come up with software that codifies my crazy and flags it as a potential crime? Excellent news!

As terror threats mount, Microsoft is among the companies exploring artificial intelligence systems which will analyse airport security footage to alert authorities to “questionable people and behaviour”.

That means computer programs will hone in on people doing things like swinging their fists, pacing excessively or just generally looking nervous.

They’d best get the jail cell ready for me now because, by those criteria, I’m stuffed.

Targeting those who appear stressed out in an airport is like looking for Trump voters at a pro-gun rally.

No wonder it’s so stressful: it’s an environment designed to bring out the worst in humanity.

They’re over-stimulated, absolutely everywhere, and when you ask if they’re carrying any weapons they get twitchy.

But it’s not just the perpetually anxious who might be flagged as security risks. The technology will also detect “untoward behaviour such as fights and arguments”.

This is a demographic so large it could put the entire airline industry out of business.

By their very nature, airports and their attendant horrors are a boiling cauldron of discord and tension, perfectly configured to put even the most robust relationship to the test.

How will a computer distinguish between a would-be shoe bomber arguing with a co-conspirator, and Pam and Trevor from the Gold Coast having a marital meltdown in the customs line because he left his passport at home in his golfing pants?

Perhaps it is the lack of control – something so critical for those predisposed to anxiety – that makes air travel such a challenge.

Nothing robs you of autonomy quite like being herded into a confined space with hundreds of agitated strangers while shouty people in uniform confiscate your water and demand you take off your belt and hand over your shoes.

No wonder it’s so stressful: it’s an environment designed to bring out the worst in humanity.

He was wrong. Hell is other people… in an airport.

So, before the tech giants profile the overly anxious, they might want to target those who exacerbate our stress when we travel.

They could start with passengers who insist on watching loud YouTube videos without headphones (usually the same people who kick the back of your chair for 13 hours straight on a long haul flight, and wear their neck pillow in the airport).

Or the agents of chaos who have somehow reached adulthood without learning that aeroplanes have allocated seating, ignoring all announcements to board by zone as they race to the front of the queue like schoolgirls at a One Direction concert.

Or what about the people who run over your toes with “hand luggage” so comically large it could only reasonably be described as hand luggage if they were a giant living in the land of giants?

Joking aside, while we all want to feel safe from potential threats when we fly, we should be cautious about technology that could further stigmatise those with mental health problems.

Pinpointing travellers who display repetitive movements could also unfairly target people on the autism spectrum, who often use these routines as a self-calming measure.

The truth is, people living with mental illness are far more likely to be the victims of crime than the perpetrators.

There are inherent risks in software built to detect behaviours a machine deems to be “abnormal” in an environment that is far from normal for most of us.

Air travel is stressful. It’s an annoying but inescapable fact of life, like death, taxes and Eddie McGuire game shows.

We should resist measures to make airports any more of an ordeal for those of us who are already anxious flyers.

We might look nervous but we just want to make our flight without being singled out as mad, bad or dangerous.

Jill Stark is a journalist and author of Happy Never After: Why The Happiness Fairytale Is Driving Us Mad (And How I Flipped The Script)

11/22/2018 lifestyle Comments Off on Sartre was right, hell is other people … in an airport
Recent Posts