Sarah Ferguson and Prince Andrew exchanged vows at Westminster Abbey in July 1986. The couple went on to share their special day with royal fans, by stepping out on the balcony of Buckingham Palace. Around 100,000 people gathered to see the couple, who proceeded to mark the occasion with a kiss. The wedding ceremony and guest list was organised by the Lord Chamberlain’s office, while the royal household was in charge of the reception.

The pair had invited 120 guests for a traditional wedding breakfast, before they and 300 others celebrated at a party at Claridge’s hotel.

Who did Sarah Ferguson have as bridesmaids and page boys?

She walked down the aisle with her father, Major Ronald Ferguson.

A number of youngsters also followers.

In a nod to Prince Andrew’s side of the family, three of his nieces and nephews, Zara Phillips, then five, Peter Phillips, then eight, and Prince William of Wales, then four, were also in the bridal party. 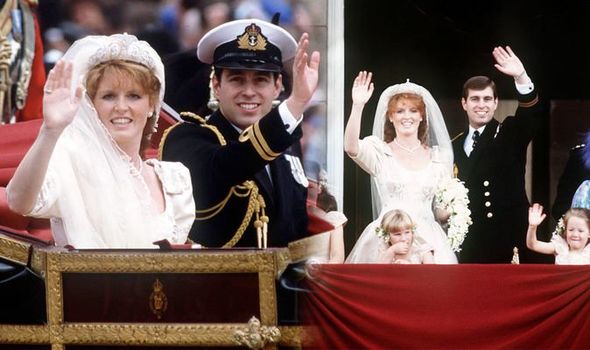 The son of Sarah’s sister Jane Luedecke, Seamus Luedecke, then five, was also a page boy.

Lady Rosanagh Innes-Ker, the daughter of Guy David Innes-Ker, 10th Duke of Roxburghe, then seven, was also a bridesmaid.

The final bridesmaid was Laura Fellowes, then six, who was the daughter of Princess Diana’s sister Jane Fellowes, Baroness Fellowes.

Not only did Princess Diana and Sarah become sisters-in-law after they married the two princes, but they had also already been firm friends.

In fact, Fergie and Prince Andrew are thought to have struck up a romance shortly after their paths crossed at a party hosted by Princess Diana, in 1985. 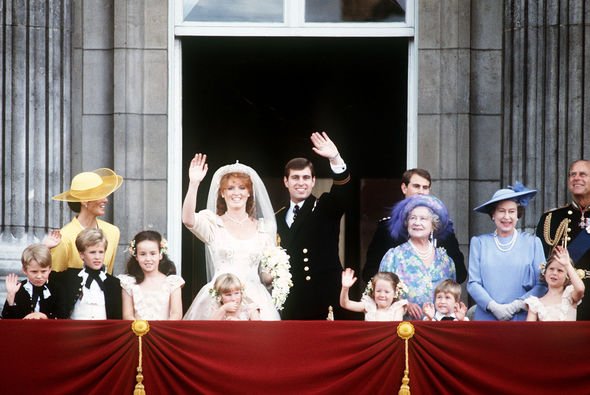 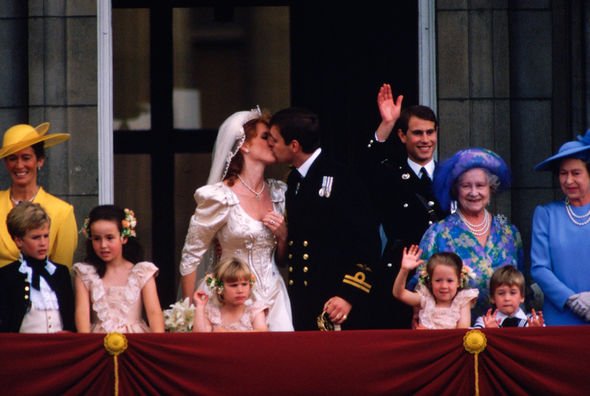 However, this was not the first time that the pair had met.

In her autobiography, Sarah recalled how she and the prince had played together as children, while her dad played in a polo match.

They later hit it off while at Princess Diana’s party, which took place after Royal Ascot.

The following year, the couple announced their plans to marry.

Sarah Ferguson: Five facts about the Duchess of York

Sarah is the second daughter of Major Ronald Ferguson and Susan Mary Wright.

Her parents divorced in 1974, with her mother going on to marry polo player Héctor Barrantes in 1975 and moving to Argentina. Sarah stayed in the UK with her father, who remarried in 1976 and went on to have three more children.

She wore an ivory-silk wedding gown designed by Lindka Cierarch which had a 17 foot train and 20 foot veil. As is tradition, Sarah wore a diamond tiara, and her wedding band was crafted from Welsh gold.

The couple spent their honeymoon abroad the real yacht Britannia off the coast of the Azores Islands.

However the couple remain on good terms, even living together in the Royal Lodge from 2008 until Sarah moved to a ski chalet in Switzerland they bought together in 2015.

Sarah has written children’s books for many years, her first being a series about Budgie The Helicopter in the early 90s.

She has also been the US spokeswoman for WeightWatchers after famously battling her weight over the years.

On top of commercial endeavours, the Duchess devotes plenty of time to charity, including Children in Crisis, which she founded in 1993.

She has over 200,000 followers across the platforms, and shares many insights in to her life.

Most of the Royal Family are not on social media, but are represented by Kensington Palace, Buckingham Palace, or Clarence House.

Sarah’s daughters, Beatrice and Eugenie, are the exception, with both joining their mother on social media.

05/15/2019 lifestyle Comments Off on Sarah Ferguson: Who were the bridesmaids at Prince Andrew wedding? Her sweet Diana gesture
Recent Posts
We and our partners use cookies on this site to improve our service, perform analytics, personalize advertising, measure advertising performance, and remember website preferences.Ok