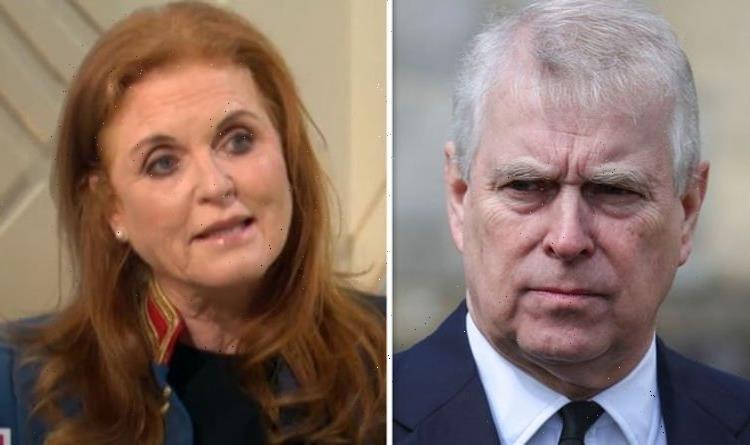 Sarah Ferguson, 61, appeared on ITV’s Lorraine to plug her debut adult novel Her Heart for a Compass on Tuesday and during the sitdown touched on family life. While the Duchess of York divorced ex Prince Andrew, 61, in 1996, the pair have remained close and still live together at the Royal Lodge in Great Windsor Park.

Following their split, they co-parented their two daughters Princess Beatrice, 32, and Princess Eugenie, 31, and welcomed their first grandchild to the world earlier this year.

Eugenie gave birth to a son August Philip Hawke on February 9 and lives down the road from her parents at Frogmore Cottage.

While Andrew used to be a working royal he stepped back from public life in November 2019 after a TV interview he gave about his friendship with deceased paedophile billionaire Jeffrey Epstein was widely criticised.

Fergie did not touch on the scandal surrounding Andrew’s links to Epstein but seemed keen to defend her former husband’s character during her latest TV appearance.

Speaking to Christine Lampard, Fergie said the pandemic has been “extraordinary [and] challenging for everybody.”

“We did co-parent very well, hence the reason why our girls are very solid and feet on the ground.”

“But now as a grandfather, oh my goodness, he’s really good!”

The royal explained: “He can go for hours talking about football and all those sorts of things… it’s a joy to see him really shine as a grandfather.”

Body language expert and author Judi James analysed Fergie’s latest appearance for Express.co.uk and claimed she was in “loyalty overkill” over Andrew.

Judi said: “Fergie’s loyalty overkill here makes her sound and look like a ‘Tiger Wife’ rather than a ‘Tiger Mom’, suddenly launching into a long character reference for her ex-husband despite doing the breakfast TV rounds to plug her new book.”

She added: “Too much praise can sound defensive and Fergie really goes for the emphatic wording here, graduating upwards from ‘such a good man’ to a ‘really thoroughly good man’ to a ‘very gentle man’, a ‘really good father’ and a shocked sounding ‘oh my goodness he’s a really good grandfather.

“She lists parental traits that would be a given for most families, where being a ‘good father’ would be pretty much the norm rather than surprising and remarkable.”

By using the word “really” the Duchess undermines the impact of her words, Judi explained.

She added: “Adding the word ‘really’ diminishes the power of the sentiment (As in ‘I love you’ versus ‘I really love you’ etc.)and Fergie throws it in three times here.”

She said: “Fergie nails all this gushing praise for the man she divorced with some gushing body language.

“Her first ‘good man’ involves a deepening of the vocal tone to sound confiding, with some head-nodding and softened eye contact to the interviewer to suggest ‘Take my word for it’.

“She raises her brows and widens her eyes to look surprised and open as her praise continues and when she uses the word ‘solid’ she stretched both hands out in a lidding pose and brings them down in an illustrative gesture.”