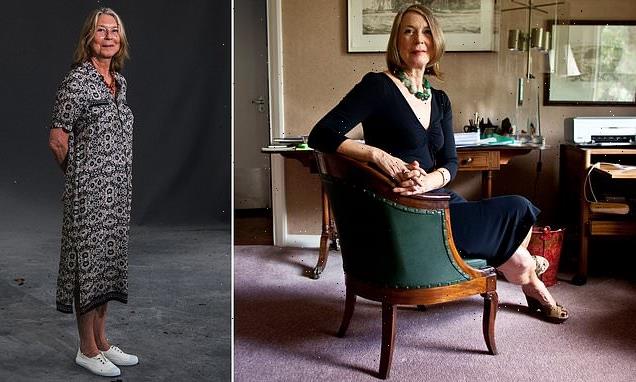 The other day, making my way gently round the park towards an Americano and a doughnut, I was rudely forced aside by a pack of zealots, many of them elderly, in various states of sporting undress.

They passed me leaving a slipstream of sweat and, for my part, a mixture of guilt and resentment.

The friend I was meeting, to whom I complained, informed me that if I looked a little way beyond the doughnut stand I could observe a class of outdoor Pilates. I didn’t look.

I wanted to eat my doughnut in peace and discuss important issues like last night’s TV and whether it’s really OK now I’m in my 70s to go braless. ‘Better not if you’re going to take up jogging,’ my friend joshed. 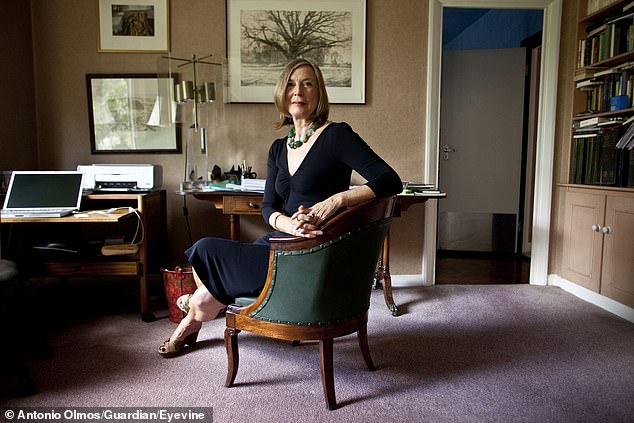 No sweat: Novelist Salley Vickers. She writes: ‘I loathe exercise. Or, to rephrase that, I loathe any form of compulsory or formal exercise…’

Strolling home again, replete with doughnut, I passed a poster that sternly announced, as if aimed specifically at me, This Girl Can. I gather it’s the work of a Lottery-funded campaign extolling women to exercise.

But you’ll never get me off my couch to 5K. I’m with David Hockney who, not long ago, wrote of the matchless pleasures of drinking champagne and smoking — for all the current strictures against it. As Hockney said: ‘Love life. The bossy-boots don’t.’

Some time ago I read on my esteemed colleague Philip Pullman’s website that he ‘approves of exercise, for other people’. I admire Philip for many things, not least for this courageous manifesto.

For surely, he is guilty of the grossest contemporary blasphemy and should be dragged before the high priests and priestesses (if we are allowed such a distinction these days?) and made to perform on the crossbars.

I’m with Philip. I loathe exercise. Or, to rephrase that, I loathe any form of compulsory or formal exercise. I always have, despite, and here’s the oddity, being blessed through parental genes with a naturally athletic physique. 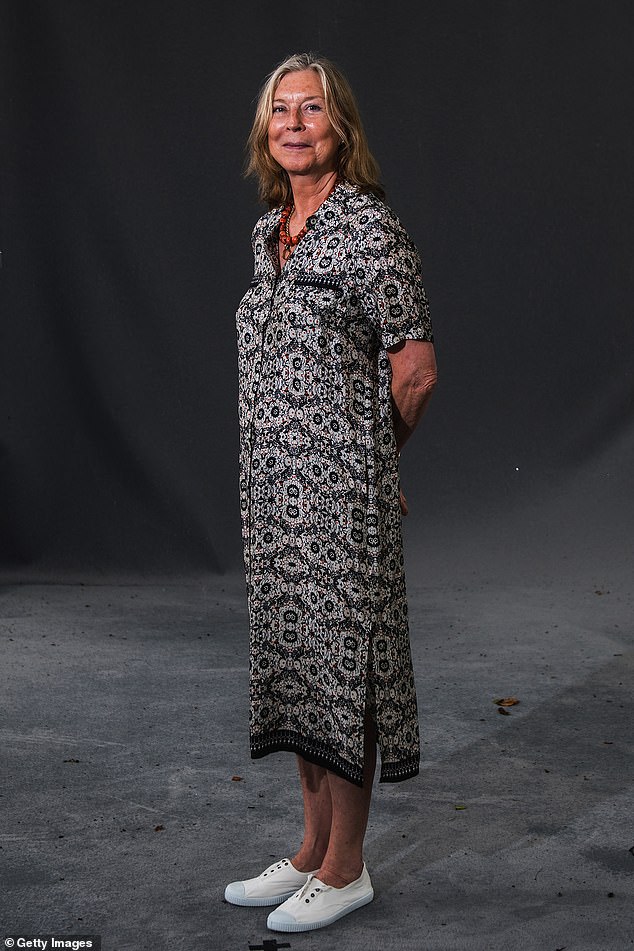 Salley says: ‘During lockdown, in order to write my latest novel I rented a tiny cottage in the country and it was bliss but for the platoons of Lycra-clad cyclists hogging the tiny roads, narrowly missing me as I ambled by picking wild flowers’

It wasn’t always thus. My childhood ambition was to be a ballet dancer and indeed I showed promise in that direction. I like to think the only reason I never became another Darcey Bussell was because my second toe grew longer than the big one, a phenomenon that makes point work a hazard.

At primary school, I was a star on the netball team and when I moved to my rather grand secondary school on a state scholarship, I won, as no one before me had done so young, ‘a white girdle’ — a wonderfully Medieval-sounding tribute awarded to those who excelled at gym.

What was more, I famously won it, as none before me had, in my very first term.

Readers, from that moment on it was downhill all the way!

The wretched white girdle meant I was more or less forced into the gym team, run by a tartar with a red face, a moustache and knobbly knees.

I wriggled out of this by working so hard at my lessons that I was jumped up a year and was able to offer the impeccable excuse that, having skipped a year, I had to mug up on my O-levels, so, dreadfully sorry, no time for fun and games.

Lacrosse, a game with no boundaries, found me running, with my lacrosse stick, so far away from the pitch that by the time I languidly strolled back, the games lesson was over.

Happily, so far as tennis went, coming from a modest state primary school, I had never played the game and faced with peers who from birth had been members of posh clubs I was considered so cack-handed no one wanted to play with me.

And then for swimming, oh dear, well, I had these shockingly ‘unreliable’ periods.

At university I got my exercise climbing out of college windows, across roofs and down drainpipes, and over high railings, in order to get into the male colleges (which, in those far-off days, were still single sex).

And I did a fair bit of punting too, but more of the lying back, gracefully dressed, hand trailing languidly in the water variety.

In adult life I have made feeble efforts to join the fitness converts and even signed up for gym memberships.

The first time, I went for an expensive one (‘cheaper in the long run’, I was assured) and there is something about paying more which somehow promises to get you off the hook. Look, I’ve paid through the nose, so surely that’s enough? 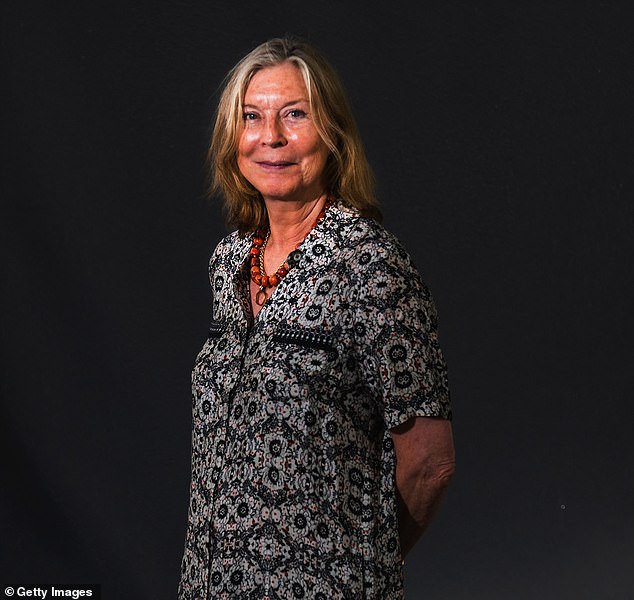 ‘Give me a fork and a pair of sturdy gardening gloves any time,’ Salley explains, following the lockdown

For good measure, I bought a large quantity of seductively packaged vitamin pills, and never went back. I think the pills are still in my kitchen cupboard, unless my younger son, who takes on the burden of sorting me out, has thrown them away.

The second time I approached a gym, a well-muscled man with rings in his nose tested my body mass index (BMI).

The BMI news wasn’t good, he was delighted to inform me, and as far as I was concerned that was that — I didn’t go there to be humiliated.

At my third attempt at gym-joining, I banjaxed my back at the very first session, which led to an expensive course of treatment at the osteopath’s. He was part of my mounting rebellion too.

When I proudly announced that, for all my age, I could still touch my toes, he briskly informed me this was no matter for congratulations, it meant that I was ‘over-flexible’, a seemingly dangerous condition, not something to boast about.

He prescribed weights and after paying his hefty bill I made for the hills.

During lockdown, in order to write my latest novel I rented a tiny cottage in the country and it was bliss but for the platoons of Lycra-clad cyclists hogging the tiny roads, narrowly missing me as I ambled by picking wild flowers.

The cottage’s garden was unkempt and sprawling, the lawn a hay field. I spent many happy hours as I dug out rampant dandelions or mowed the knee-high grass.

Goodbye gym, goodbye Pilates, goodbye salsa and Zumba classes — give me a fork and a pair of sturdy gardening gloves any time. And so it was that I found, at last, the perfect excuse to jettison for ever any other form of keep-fit.

The Gardener by Salley Vickers (£8.99, Penguin) is out now