Corporate and political observers believe a revised bid by Hong-Kong-based CKI for gas pipeline giant APA that involved teaming up with a non-Chinese partner or promising to sell more assets could get the controversial deal over the line.

The $13 billion deal suffered a serious blow on Thursday when Treasurer Josh Frydenberg ruled it was a threat to national security. 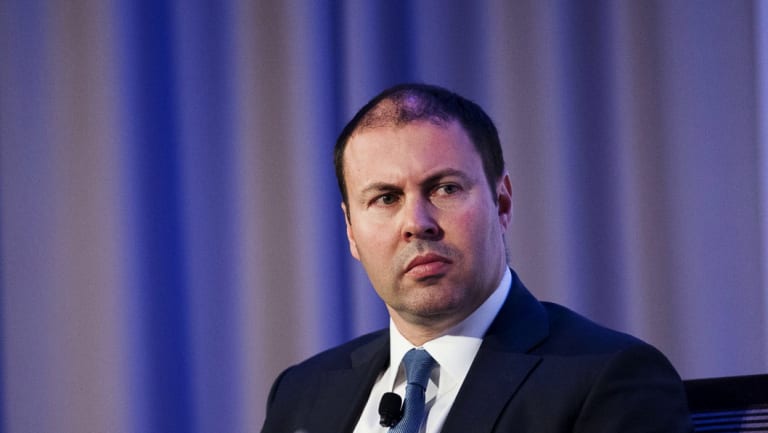 Treasurer Josh Frydenberg still has two weeks to give a final decision on CKI’s takeover of APA, giving time for a potentially revised bid.Credit:Chris Pearce

Mr Frydenberg based his decision on preliminary recommendations by the Foreign Investment Review Board and Critical Infrastructure Centre, which found giving a foreign company control of the pipeline monopoly could present a national security risk.

However, the fact FIRB's decision was not unanimously recommended by its panel and language within the Treasurer’s statement that suggested CKI might have a better chance of success with a bidding partner may prompt the Hong Kong utility to consider changing its offer.

With two weeks until a final decision is announced, sources close to CKI indicated there were ways the company could potentially "solve" the deal, currently priced at $11 per APA share.

“FIRB has left the gate open on a new proposal – there are still two weeks to make a decision,” a source close to the deal, who preferred to remain anonymous, told Fairfax Media.

CKI has the opportunity to potentially modify its application. It would need to address the main issue highlighted by FIRB which is “undue concentration of foreign ownership by a single company group”.

Union-backed infrastructure investor IFM and Canadian pension funds are believed to have been preparing bids for APA if the CKI offer was rejected by the government. It is possible one of these groups could team up with CKI to launch a joint approach.

CKI had already said it would sell assets in Western Australia – where it competes with APA – if its original bid was successful. It could offer to sell additional pipelines or transmission assets, such as the pumps that push the gas, to appease FIRB.

The APA takeover bid is a politically sensitive corporate deal for the Morrison government, which is trying to restore relations with China. The preliminary rejection came in the same week Defence Minister Marise Payne travelled to Beijing.

Centre Alliance senator Rex Patrick, one of the most vocal opponents in Canberra to CKI's acquisition, said he would support CKI's proposal if it sought to break up APA's monopoly position.

"It depends on the level of these changes, but I would be open to it if it makes a change to the status quo monopoly," Mr Patrick told Fairfax Media.

"However, also it depends on the degree of foreign ownership."

The source close to CKI said the company could simply take a majority stake in a ASX-listed entity that owned the pipelines and keep some of the shareholders on the register.

The source pointed to a similar deal with Chinese-owned firm Yancoal in its purchase of coal miners, where the company acquired a number of assets and then listed them as a separate vehicle at a later date.

“The fact the share price is still hanging around $8.60 shows the market’s hope of a revised deal. “[Plus Josh] Frydenberg pointing out that FIRB was unable to reach a unanimous decision, that the issues were about a single party risk, and there are still two weeks before a final decision leave it open,” he said.

This potential revision was backed by Deutsche Bank, which said a partnership was a likely option for CKI.

“We believe investors will be introduced into the consortium,” DB analyst Michael Morrison said.

“The Treasurer stated that he intends to make a final decision within two weeks. This is ample time for CKI to revert to a Plan B.”

Wood Mackenzie’s director for gas and LNG, Nicholas Browne, said a revised deal hinges on how eager CKI is for APA assets but warned two weeks would not be enough time to create a new approach.

“A revised deal would test the patience of CKI and leave them asking whether they want to wade back into the political undercurrents around this,” Mr Browne told Fairfax Media.

“They could offload assets but if you’re going to separate the company then that makes the rationale for acquisition weaker. It could do a partial listing. A partnership looks more likely, although they don’t have a track record of co-investments. 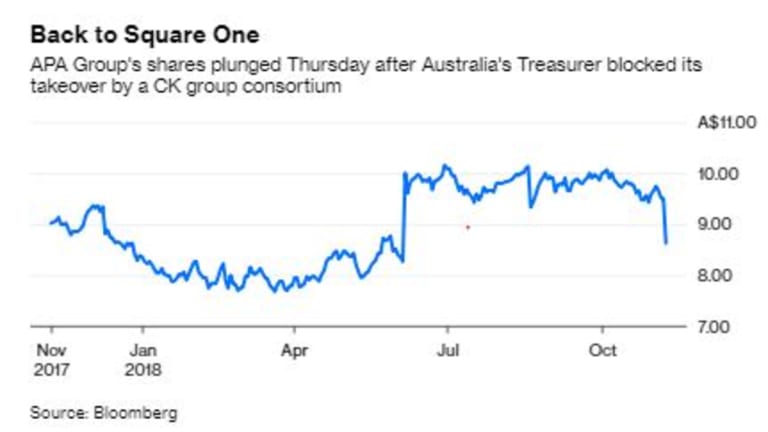 Shares of APA tanked on Thursday following the government’s decision to block the deal, but not as much as expected.Credit:Bloomberg

APA, its largest shareholder UniSuper, and CKI declined to comment.

APA shares started trade on Thursday at $8.46, more than 10 per cent below Wednesday's closing price of $9.51. After the early losses, the stock began to regain some ground, recovering to $8.57 by the end of trading.