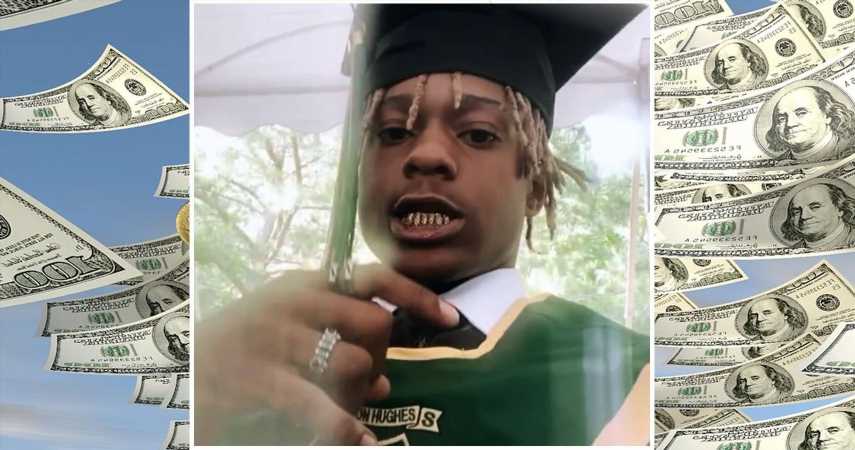 Rapper Metro Marrs is really making a name for himself, and he’s not just doing it with his music. As part of his rap performance during his own high school graduation at Langston Hughes High School in Fulton County, he decided to pull a wad of $10,000 out of his pocket and he proceeded to make it rain.  By doing so, he essentially distributed the cold hard cash to any of his peers that were able to grab at it. TMZ reports the police were called in and he was detained, but that hasn’t tainted his generous spirit. He’s already planning his next performance and cash-toss, and this time, he’s planning to double the value and throw $20k into the crowd.

Marquise Smith is an 18 year old rapper from Fulton County who is best known by his stage name of Metro Marrs. He’s seen wild success with his music career, and was signed to Quality Control music at the tender age of just 17. To put his talent in perspective, this is the same label that represents Migos and Lil Baby, and the potential for Metro Marrs to propel from this level of artistic expression to superstardom is very real.

Everyone knows that in order to truly make it in the world of entertainment, an artist really has to stand out among the rest, and Marrs has certainly found a way to do that. As a young man raised with morals and the genuine dedication to give back to his community, he has made it his signature trademark to throw cash money into the crowd during his performances.

MSN Entertainment quotes him as saying; “I had $10K in my pants and just to throw it up on stage at graduation was real memorable for my peers. I was like, ‘I gotta go out with a bang here!’ Go big or go home!”

It didn’t take long for the police to move in and detain him, but Marrs says he wasn’t charged or arrested, and he enjoyed the excitement felt by the crowd.  He also told the press that he credits his parents for teaching him to give back to his community, in spite of the fact that this may not quite be the way they intended for him to do it.

Metro Mars is planning a repeat performance at his brother’s high school reunion at Langston Hughes High in nearby Atlanta. The ceremony is slotted to take place next year, and he is pledging a $20,000 donation to that event.

Until then, he’s going to focus his energy into the release of his new album called Popular Loner, which is scheduled to be released on June 18.

READ NEXT: Rapper ‘The Game’ Fined Over $500K For A Cancelled Australian Tour