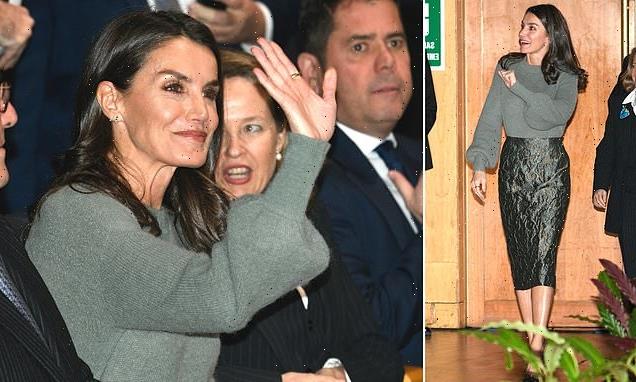 Polished perfection! Queen Letizia of Spain looks elegant in a statement floral skirt and jumper as she steps out in Madrid

She’s known for her fashion prowess – and Queen Letizia of Spain didn’t disappoint today as she stepped out in a statement floral skirt for an event in Madrid.

The royal, 50, was effortlessly elegant in a chic jumper with trumpet sleeves, teamed with a textured midi-skirt, as she attended an event for the ‘Proyecto Promociona’ initiative, aimed at getting more women into senior management positions.

The mother-of-two sported some stylish stilettos to finish the look off, keeping her accessories to a minimal.

Letizia wore her chestnut tresses down, styled in loose waves, and opted for a glam make-up look with lined lashes and a mauve lipstick. 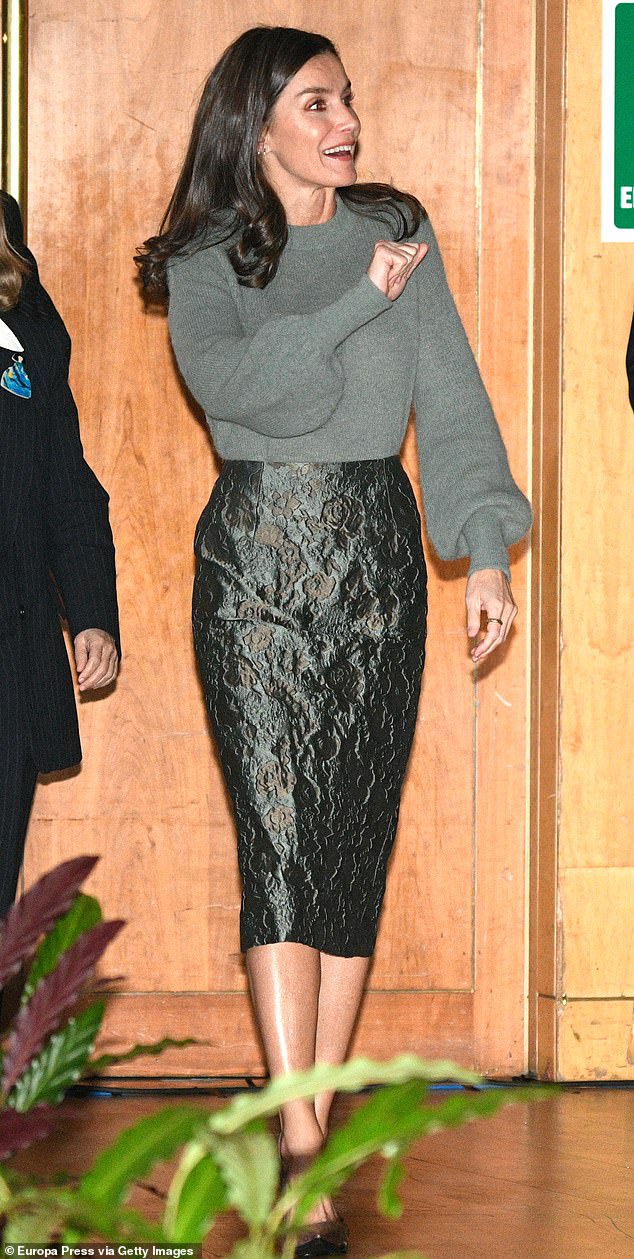 The Proyecto Promociona is committed to support and mentor companies looking to promote women. Since 2013, more than a thousand women have taken part in the project.

The queen appeared to be delighted to be surrounded by attendees at the initiative’s event as she smiled and waved at guests.

It comes as the King and Queen of Spain looked relaxed as they stepped out for their first engagement of the year last week.

The royal couple marked the country’s Epiphany Day with a military parade followed by a reception at Madrid’s Zarzuela Palace. 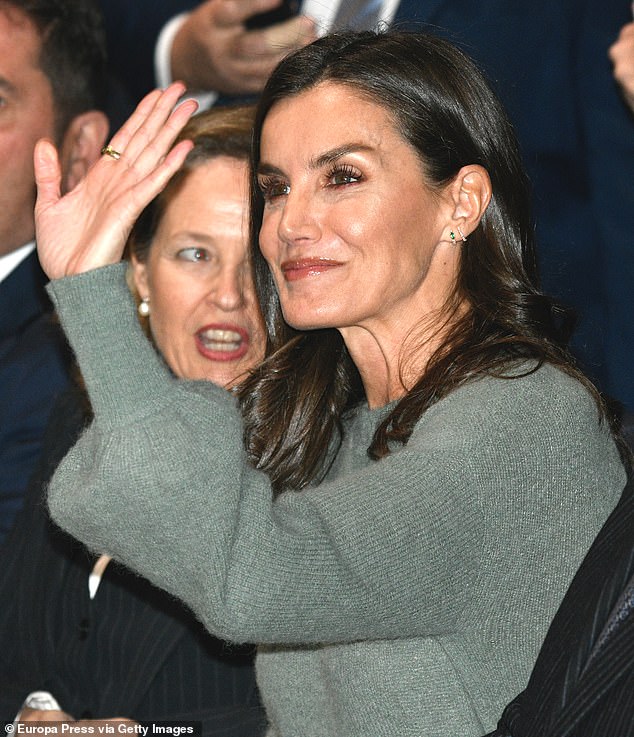 The royal, 50, was effortlessly elegant in a chic jumper with trumpet sleeves, teamed with a textured midi-skirt

The mother-of-two sported some stylish stilettos to finish the look off, keeping her accessories to a minimal

Letizia renewed her commitment to sustainable fashion for the occasion, by wearing two pieces she’s worn multiple times before.

Donning a daring form-fitting gown from Spanish designer Felipe Varela, the Spanish royal, who enjoyed the break with her family away from the spotlight, looked well rested at the event to mark the Spanish holiday.

Tradition has it that the Queen always has to wear a floor-length number for her first engagement of the year, and Letizia looked as regal as ever in the lacy floor-length gown which highlighted her waist and svelte silhouette.

As always, she kept her look simple, and paired the gown with a black cape she has worn on several occasions to wrap up in the cold.

Letizia smiled as she strolled through the event, looking chic in a textured midi skirt and jumper

Letizia clapped at the event, looking stylish as ever with minimal jewellery to accentuate her look

She accessorised with a small pair of gold earrings and her beloved Karen Hallam ring for the event.

Her brown locks were styled in a luscious straight blow-dry curling up on her shoulders.

She donned a healthy glow, enhanced with well placed brushes of makeup, with a dash of bronzer highlighting her cheekbones and a sculpted brow and eye liner to bring definition to her hazelnut eyes.

Meanwhile her husband Felipe, 54, Supreme Commander of the Armed Forces, donned his full military regalia for the event. 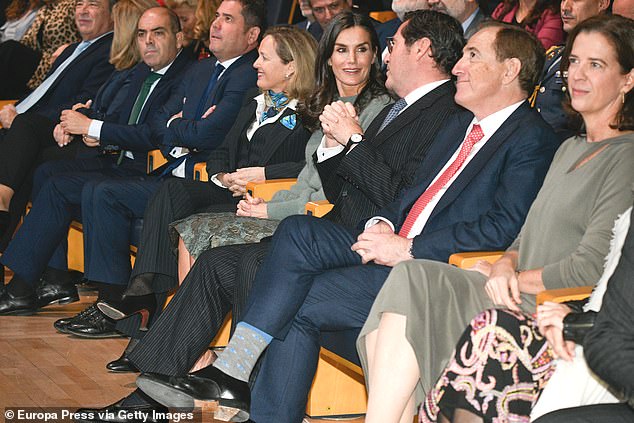 Letizia wore her chestnut tresses down, styled in loose waves, and opted for a glam make-up look with lined lashes and a mauve lipstick 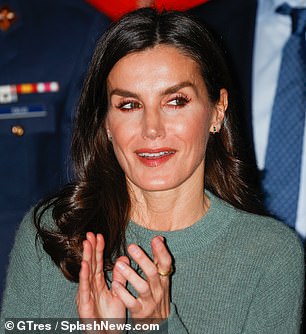 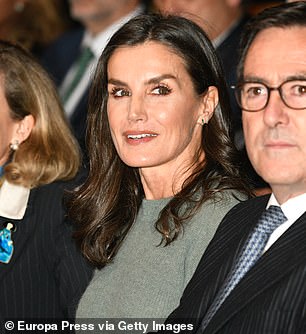 Letizia appeared to sport lashings of rosy blush on her cheeks for the event, bringing out a dewy glow 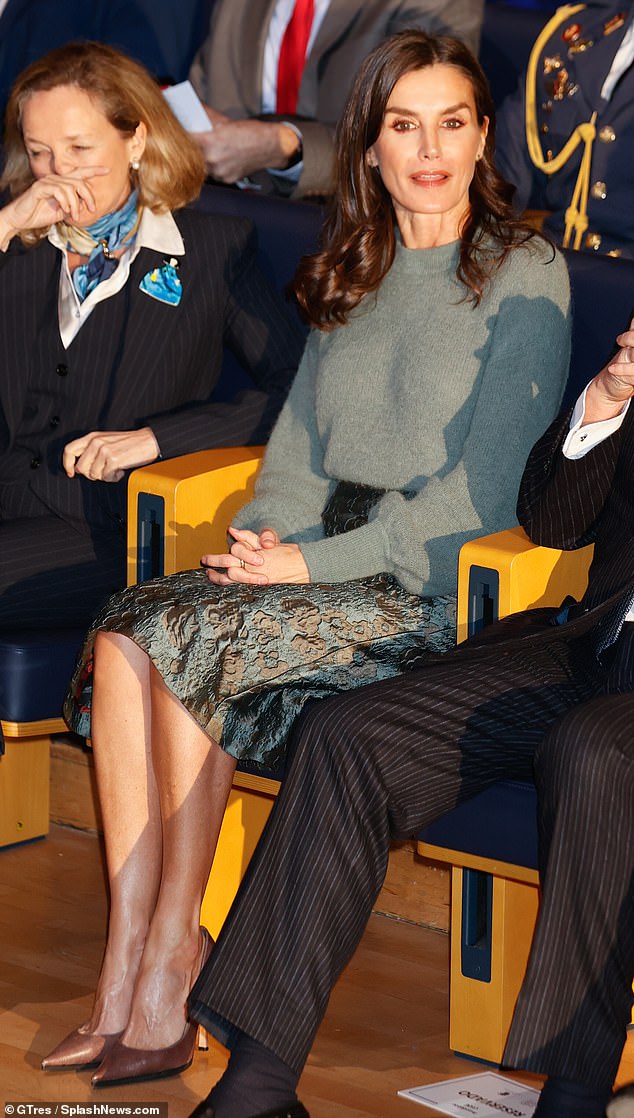 The queen styled her glossy chestnut locks in loose waves, and opted for a simple yet elegant make-up look

Known in Spain as El Día de los Reyes (Day of the Kings), it is celebrated with presents and colourful parades, the oldest of which takes place in Valencia.

The biggest and most important, however, is Madrid’s – thanks in no small part to the presence of a real king at the procession.

Considered almost as important as Christmas Day itself, Epiphany marks the moment when baby Jesus, at just a few days old, was seen for the first time by the Magi or Three Kings. 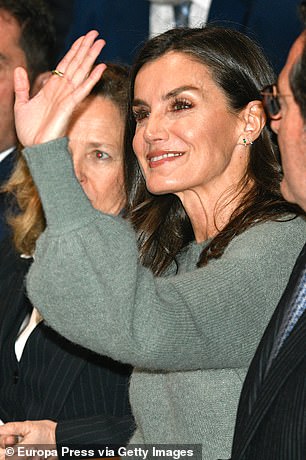 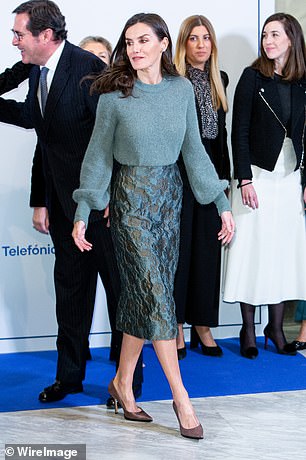 Letizia appeared in high spirits at the event for The Proyecto Promociona, which is committed to support and mentor companies looking to promote women

The royal family kicked off the event by watching a military palace in front of the royal Palace, before heading inside to host a reception.

It also marks the sovereigns’ return to public duties after a two-week-long Christmas break with their daughter Princess Leonor, 17 and Princess Sofia, 15.

Regal in red! Queen Letizia of Spain stuns in recycled crimson gown as she joins King Felipe to celebrate Epiphany Day on first royal engagement of 2023

How Hippy Harry inherited a love of psychics from Diana: Late royal regularly consulted mediums – including one who was with her the day she recorded Panorama interview

Princess Charlene takes the US! Olympic swimmer is elegant as she celebrates opening of aquatic centre in Fort Lauderdale with Prince Albert