The suspended NSW Labor MP whose office and home were raided as part of an investigation into a Chinese government interference plot says he has still not been questioned, and is demanding the federal police "come up with the evidence" or clear his name.

In his most detailed response yet to the extraordinary police raids of his home and office on June 26, Shaoquett Moselmane has savaged the "Morrison government's forty-plus Federal Police agents" who raided him for failing to produce "a single allegation" against him. 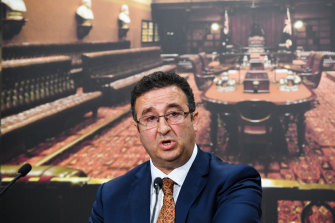 Upper house MP Shaoquett Moselmane has maintained his innocence after his office and home were raided by federal agents as part of an investigation into Chinese Communist Party influence.Credit:Peter Rae

The comments were published on a blog just days after it was revealed that Mr Moselmane's part time staffer John Zhang had been raided on the same day because police believed he was collaborating with the Chinese government's leading spy agency to influence NSW politics.

Mr Moselmane wrote on the blog that he did not "know what the allegations are, other than that the Morrison government is searching for evidence of a foreign plot to advance the interests of China." 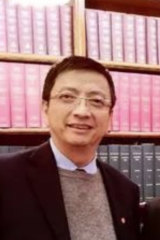 "Contrary to what one reads in the Australian media, no federal police officer has questioned me about that nor ever suggested I was a suspect."

Mr Moselmane complains that even though a month has passed "since that dreadful raid on my family home", he was still in the dark about why he had been subject to what he described as a "very public execution".

"To date neither I nor any of my staff have been charged. The Morrison government’s forty-plus Federal Police agents have not produced a single allegation," he wrote.

Mr Moselmane also alleges that the police investigation has been politicised, though he produces no evidence of this.

"I have no problem with the lawful use of investigative agencies to promote security. What I am critical of is the oppressive nature of this ministerial manoeuvring especially by Peter Dutton and Scott Morrison to use me and [Mr Zhang] as the scapegoat for their failing to promote a strategic, balanced and independent Australian own foreign policy."

Mr Moselmane also attacks the Labor party, which moved to suspend him on the day of the raids of his home, claiming that some "within my own political party" were seeking to aid the campaign to "smear" his name.

I will continue to be a friend of all, not least the Australian-Chinese, and the broader Asian communities.

Mr Moselmane has not responded to repeated requests to conduct an interview with The Age and The Sydney Morning Herald instead publishing his comments on a blog run by left-wing commentator and retired public servant John Menadue, whose website regularly critiques those considered too hawkish on China.

Documents filed in the High Court on August 3 revealed the basis for the raids on the home and business of Mr Zhang, a part-time staffer of Mr Moselmane's. The reasons include that Mr Zhang used a private social media chat group with Mr Moselmane to encourage the MP to advocate for Chinese state interests.

Mr Zhang is also accused of failing to disclose to Mr Moselmane that he was acting "on behalf of, or in collaboration with" the key apparatus of the Chinese Communist Party, "including the Ministry of State Security and the United Front Work Department". Mr Zhang is challenging the lawful basis of the raids on his home.

"I will continue to do my work as an elected member of the NSW Parliament," Mr Moselmane said in his post on Mr Menadue's website.

"It’s time for the federal police to come up with the evidence for charges or drop the allegations against me and my name."