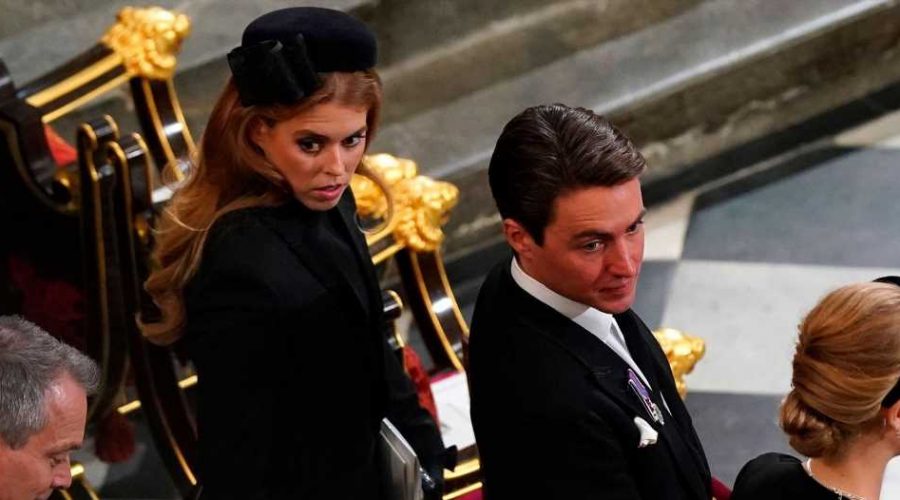 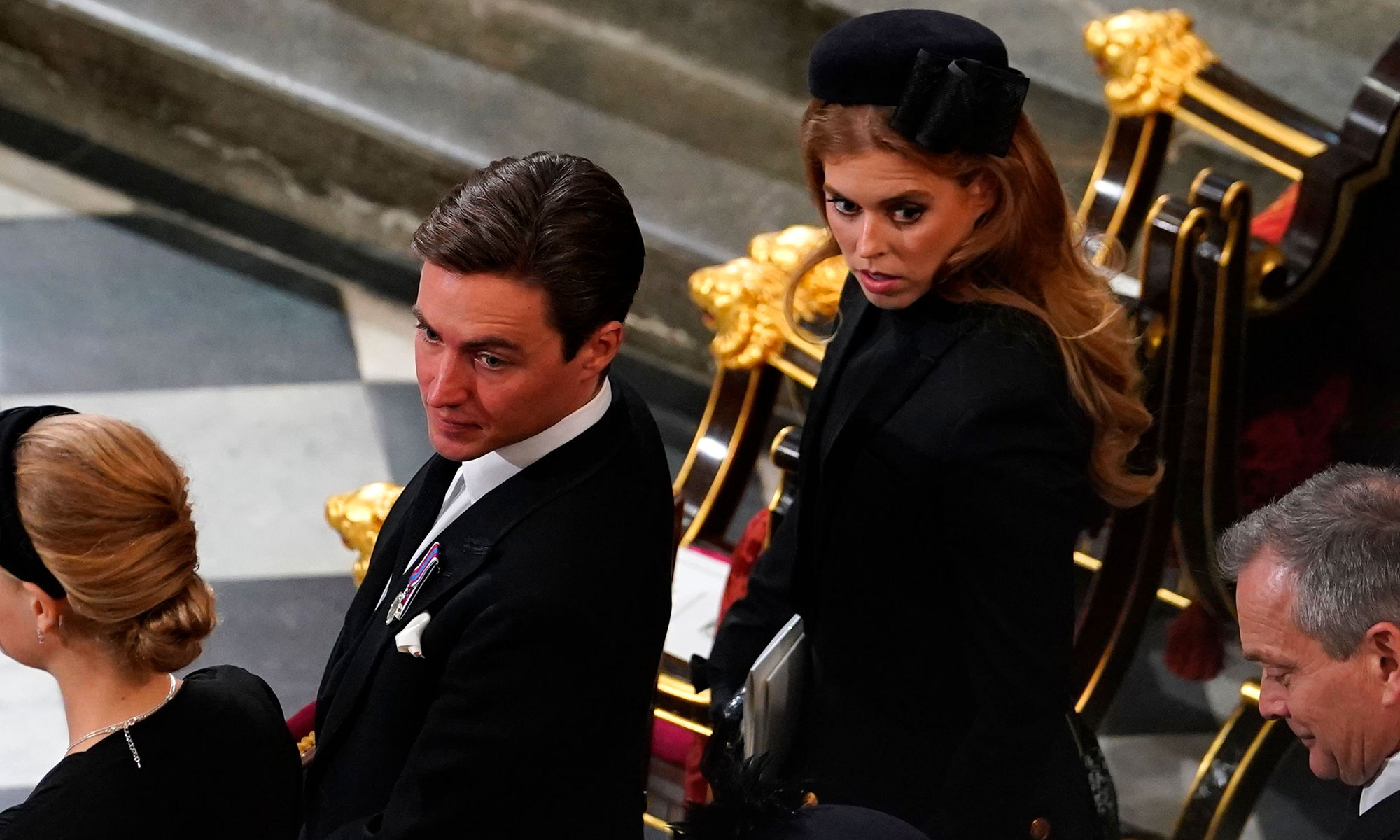 Like most of the young parents among her family, Beatrice, 34 — who is also an Italian contessa after marrying Mozzi in July 2020 — did not bring her children to the somber event. She and her husband, 38, welcomed daughter Sienna in September 2021, and Mozzi shares son Christopher, 6, with ex-fiancée Dara Huang.

The twosome arrived at Westminster Abbey hand-in-hand, following her sister, Princess Eugenie, and husband Jack Brooksbank to their seats. Beatrice and Mozzi, for their parts, were seated beside her cousin Prince Harry and his wife, Meghan Markle. On the pair’s other side sat cousins Lady Louise Windsor and James, Viscount Severn.

The queen’s state funeral was held at Westminster Abbey in London. She died on September 8 at Balmoral Castle in Scotland, and her coffin traveled to The Palace of Holyroodhouse and then St Giles Cathedral in Edinburgh before returning to England last week.

On Wednesday, September 14, the queen’s casket was transferred with a procession from Buckingham Palace to Westminster Hall. The royal family — including Prince George and Princess Charlotte — accompanied her coffin to Westminster Hall, where a brief service was led by the Archbishop of Canterbury and Reverend Dr. David Hoyle, Dean of Westminster.

Those further removed from the throne were further back from the coffin. Beatrice stood with her husband and sister Princess Eugenie, who quietly wiped away tears during the service. The Wednesday event started the lying in state period for the queen, which allowed the public to pay their respects in person.

William, Harry and All of the Queen’s Grandchildren Hold Vigil in Her Honor

The royals have been open about how the late monarch’s passing has been quite emotional. While greeting well-wishers with the king, 73, in Belfast, Ireland, on Tuesday, September 13, Camilla, 76, stopped to speak with a woman who said, “You’re doing an amazing job.” Camilla, replied, “We’re doing our best,” per a video uploaded by an onlooker. 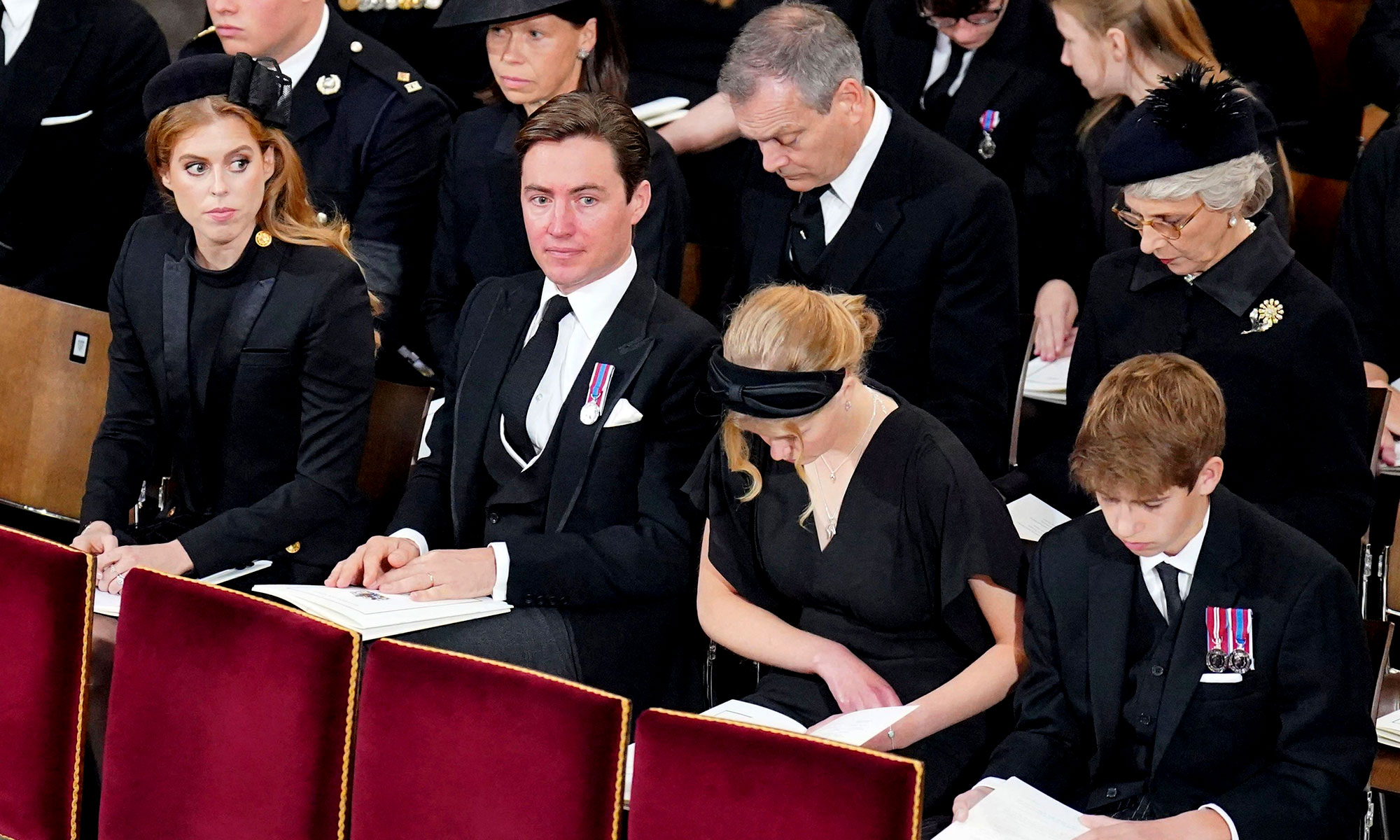 The new Prince and Princess of Wales have been similarly candid. “William said he thinks Monday [the queen’s funeral] will be hard,” well-wisher Bex Neeve said on Thursday.

“[Kate] said it’s been overwhelming and she and William are very grateful for everyone being here. She was emotional,” Reeve continued. “They seemed like they were here to soak up all the love.”

While speaking in front of the Ascension Council on Saturday, Charles continued to mourn the “most sorrowful” loss of his mother. “I know how deeply you, the entire nation — and I think I may say the whole world — sympathize with me in the irreparable loss we have all suffered,” he said. “It is the greatest consolation to me to know of the sympathy expressed by so many to my sister, [Princess Anne], and my brothers, [Prince Andrew and Prince Edward], and that such overwhelming affection and support should be extended to our whole family in our loss.”

Beatrice and Eugenie broke their silence on Saturday, September 10, before they stood vigil by her coffin with the late sovereign’s other grandchildren in Westminster Hall. They shared a lengthy letter to their late grandma.

The Royal Family: Get to Know the Next Generation

“The world mourns you and the tributes would really make you smile. They are all too true of the remarkable leader you are,” they wrote. “We’re so happy you’re back with Grandpa. Goodbye dear Grannie, it has been the honour of our lives to have been your granddaughters and we’re so very proud of you.”

They’ll say their final goodbyes on Monday in Windsor. After a procession departing Westminster Abbey, the coffin will travel to St George’s Chapel for a final service, and the queen will be laid to rest in a tomb alongside her late husband Prince Philip, who died in April 2021 at age 99.