‘I love Camilla!’ Duchess of Cornwall emerges as the breakout star of BBC documentary on husband Prince Charles (with the help of her husky ’40 a day’ tones)

The Duchess of Cornwall has emerged as the breakout star of a new documentary about the Prince of Wales.

Cameras followed Camilla and her Charles over the course of 12 months, interviewing the Duchess about her husband’s thoughts on ascending to the British throne.

It provided a fascinating insight into the couple’s private life at home and at court, with viewers enthusing about Camilla’s wry sense of humour and ’40 a day’ husky voice.

The Duchess is a former smoker but kicked the habit almost 20 years ago, much to Charles’ relief. 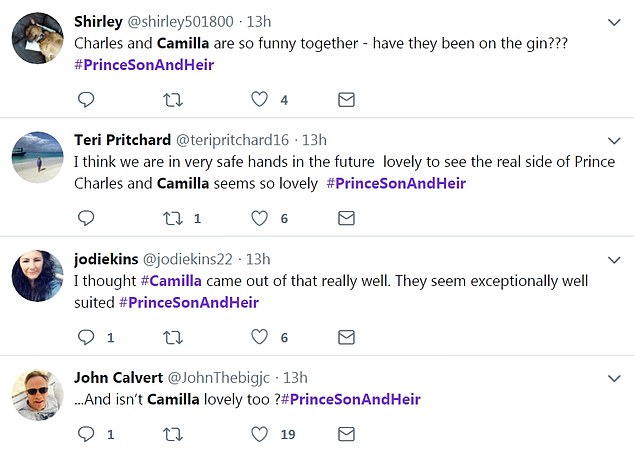 Taking to Twitter, viewers have been won over by Camilla’s wry sense of humour and ’40 a day’ husky voice in BBC One’s Prince, Son & Heir which aired on Thursday evening

John Bridcut’s BBC One documentary saw the couple walking their dog Beth at their Scottish retreat in Birkhall and speaking about family life in London.

Commenting on a scene that saw the couple squabbling, another wrote: ‘Camilla telling Charles off and to listen to the kids singing is the highlight so far’.

Appearing on BBC One’s Prince, Son & Heir – Charles at 70 on Thursday evening, Duchess spoke at length about Charles’ thoughts on becoming king, and the close bond he has with his eight grandchildren.

‘He will get down on his knees and crawl about with them for hours, you know making funny noises and laughing and my Grandchildren adore him, absolutely adore him,’ Camilla said.

‘He reads Harry Potter and he can do all the different voices and I think children really appreciate that.’

In another scene, producers asked the duchess whether Charles often thinks about becoming king. 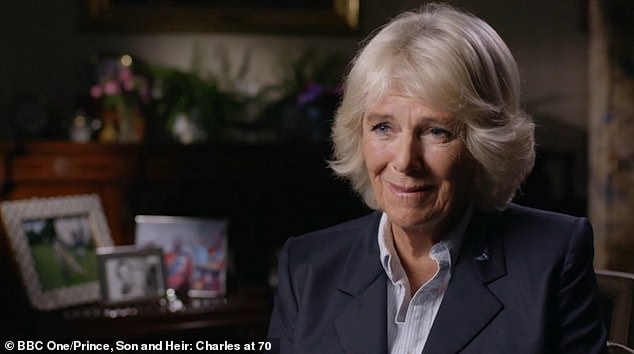 In last night’s BBC One documentary, the Duchess of Cornwall spoke at length about Charles’ thoughts on becoming king, and the close bond he has with his eight grandchildren 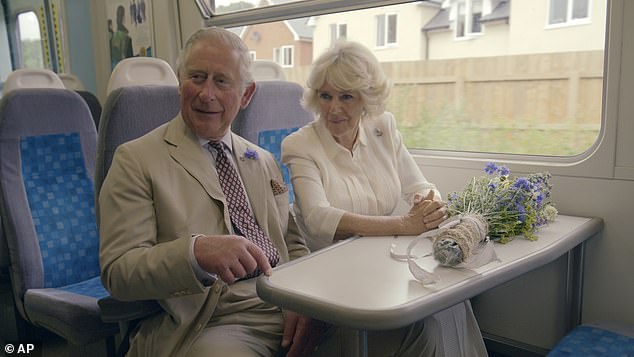 Charles and Camilla travel on a train during last night’s documentary. Commenting on a scene that saw the couple squabbling, one fan wrote wrote: ‘Camilla telling Charles off and to listen to the kids singing is the highlight so far’

‘No I don’t,’ she replied. ‘I think his destiny will come, he’s always known it’s going to come and I don’t think it does weigh on his shoulders at all. It’s just something that’s going to happen.’

The great and good of European royalty are set to gather in London next week to mark the Prince of Wales’ landmark 70th birthday.

Kings, queens, princes and princesses from across the continent are expected to travel to Buckingham Palace for a glittering banquet held in Charles’ honour on November 14.

Denmark’s Crown Princess Mary and Crown Prince Frederik will be attending on behalf of the Danish royal family, while Queen Sonja and King Harald are rumoured to be on the guest list.

The soirée will see hundreds of guests enjoy a reception followed by a lavish dinner, possibly in Buckingham Palace’s opulent state rooms, with details kept strictly under wraps until the big night.

Prince, Son & Heir – Charles at 70 is available on iPlayer now