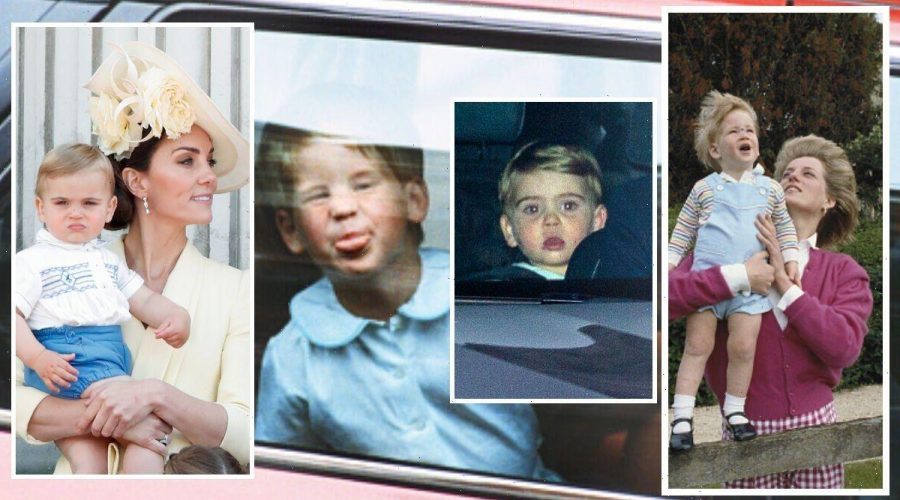 Prince Louis, four, is the younger sibling of Prince George, eight, and Princess Charlotte, six. George will be the future King of England, making Charlotte and Louis the future ‘royal spares’. Similarly, Prince Harry, 37, grew up as the royal spare to his older brother Prince William, 39.

Body language expert Judi James spoke exclusively to Express.co.uk to compare Louis’ body language with Harry’s when he was a similar age.

Judi analysed how Louis will handle the pressure of being the ‘royal spare’ and if he will react in a similar way to his uncle.

The expert said: “Not only does little Louis seem to have inherited the Middleton features and hair colour.

“But his body language seems to be showing signs of a similarly calm, happy and outgoing personality as his mother Kate.”

How does this compare to Prince Harry?

Judi commented saying: “With two doting mothers and two older siblings who would one day be King, little Louis and the young Harry should have a lot in common.

“But they do have an important difference in the sibling pecking order.

“Harry is next down to his brother, while Louis has the buffer of middle sibling Charlotte between himself and George,” Judi noted.

Judi added: “Harry seems to have been William’s alter-ego: the playful and often naughty-looking brother who took full advantage of his lack of regal responsibility to have fun.

“He also acquired a strong competitive streak with William that began with jokey banter and ended in two lives lived on other sides of the world.

“It’s Charlotte who seems to have some of the confidence, curiosity and fun outlook of the young Harry,” Judi claimed.

But how does Prince Louis’ body language compare to that of his uncle?

She continued: “Meanwhile the constantly good-natured and calm-looking Louis seems to have the benefit of close relationships with two older siblings but without any obvious signs of competitiveness so far.

“With two siblings at school, he must feel very much the baby of the family.

“His behaviour suggests he is happy and self-confident in that role.

“Both boys get a surplus of loving attention and cuddles from their mothers and Louis looks outgoing and sociable with no obvious signals of shyness.”

Was it obvious from a young age that Harry would be the “joker” of the family?

Judi said: “It was always pretty obvious Harry was going to be the joker of the Royal Family, with his naughty grins and his tongue-poking poses.

“Although William was just as fond of sticking his tongue out in the car when he was younger.

“But Louis looks calmer and less cheeky than his uncle did.”