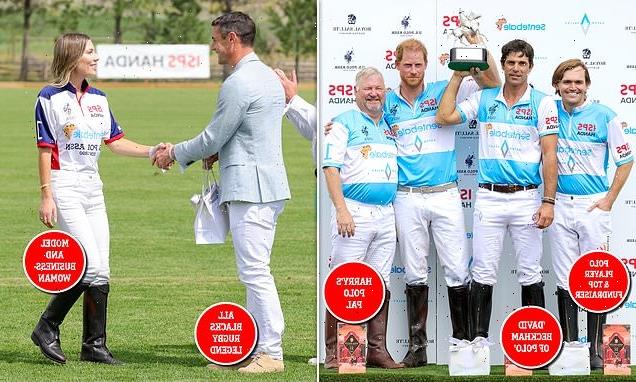 Prince Harry’s polo pals! The players who watched the Duke of Sussex lift the trophy at a charity match in Colorado – including an international rugby hero and the ‘David Beckham of polo’

When Prince Harry made the decision to step down as a senior royal and move to LA with Meghan Markle, many wondered if the Duke of Sussex would miss home.

However, despite being 5,000 miles from the UK, Harry still has his home comforts – including keeping up his favourite sport, polo.

Soon after moving stateside he joined the Los Padres polo team in Santa Barbara and is often seen at matches on sunny days.

His teammates have also become firm friends to both the Duke of Sussex and Meghan Markle, who has been seen comforting them after losses.

Charitable Harry also uses his love of polo to raise funds for causes he believes in, and has just competed in the Sentebale Polo Cup in Aspen, Colorado, in aid of the charity Sentebale which he founded in 2006 to help children in African countries affected by HIV/AIDS and more recently, Covid-19.

The Duke put together a special team to take part in the tournament which included his good pal and Sentebale ambassador, Ignacio ‘Nacho’ Figueras.

On the opposing team were some other well-known faces including model and businesswoman Ashley Van Metre, and the awards were presented by rugby legend Dan Carter.

Here, FEMAIL takes a look at Prince Harry’s friends, including some familiar faces… 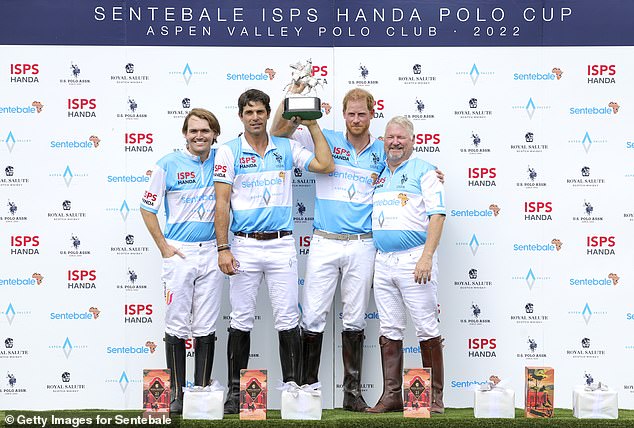 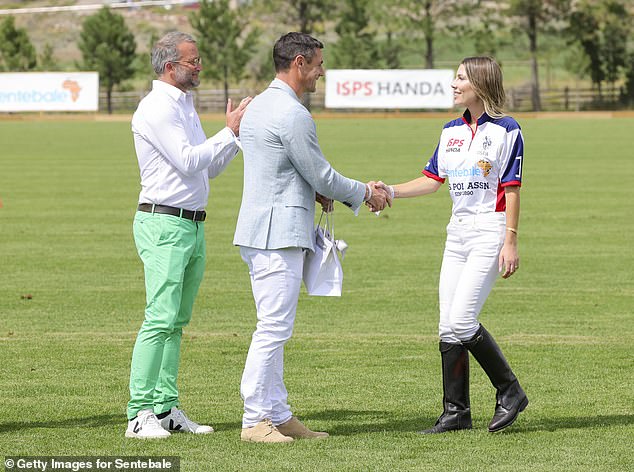 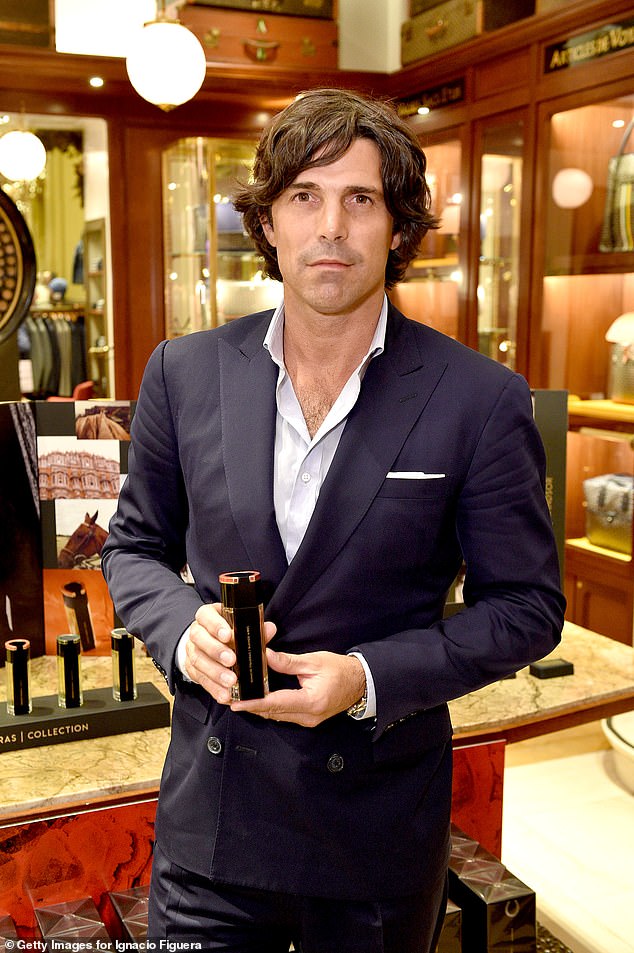 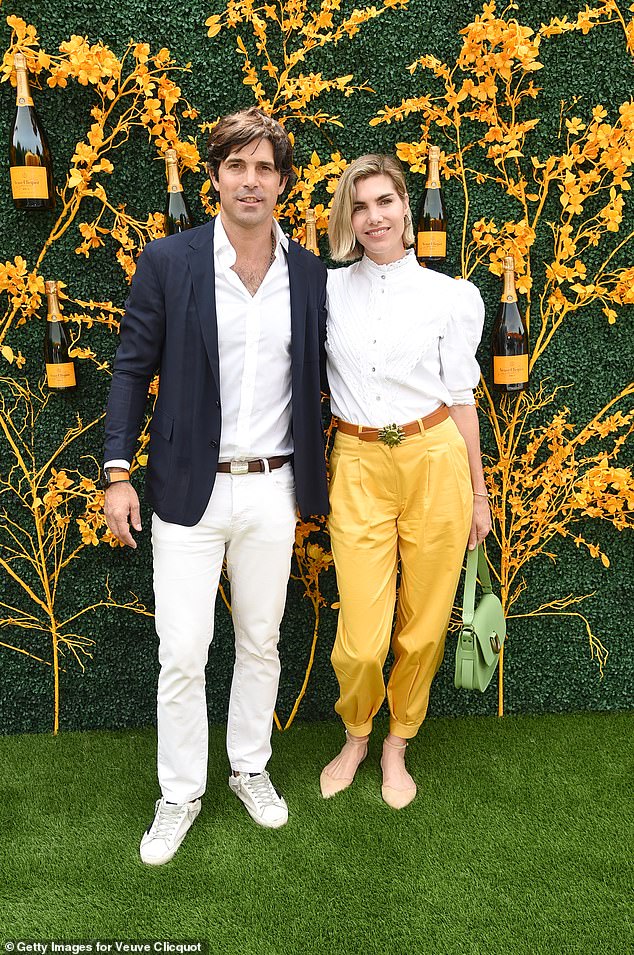 Argentinian Ignacio Figueras (known as Nacho) may be one of the top polo players in the world, but he has earned a few other credentials to his name, from fashion model to philanthropist and is a close friend of the British Royals.

Described by Tatler as ‘the David Beckham of Polo’ he holds a 6-goal handicap and an estimated net worth of $30 million, has been modelling for Ralph Lauren since 2000.

But modelling was never the goal for the athlete, who began his career just to earn some extra cash and bring more attention to his beloved sport. It all took off when he was approached by photographer Bruce Weber at a party in The Hamptons hosted by Calvin Klein’s ex-wife Kelly, who encouraged him to get his start in modelling.

Known as one of the most recognisable players in the world, he has actively spoken out to defend Harry and Meghan over the years.

The father-of-four attended the Sussex wedding and is an ambassador for Sentebale, an organisation founded by the prince which is dedicated to helping children and young people who or whose families suffer with HIV and Aids in Lesotho.

He appeared on Ellen’s show in September 2019 to announce that he would ‘defend his friends’ with his life.

During the interview he also described Meghan as ‘incredible’, and revealed how she ‘gave up everything for the man she loves’.

He also a selection of six fragrances, including one named ‘Windsor’, which hinted at a ‘brotherhood of kindred spirits’ with the Duke.

While that avenue of his career has introduced his objectively handsome face into everyday homes via glossy fashion magazines and television commercials, the game of polo has always been his true passion.

Born and raised in Buenos Aires, Argentina, he started playing the game at the ripe age of nine years old after his father introduced him to the sport. He became a professional polo player by the time he was just 17. After a stint in Europe, he ended up at the White Birch Polo Team based in Bridgehampton, New York.

But Nacho’s love for both polo and investing in charity work is what ultimately led him to his most famous relationship.

He and Prince Harry share some common interests, one of them being, of course, polo.

The pair have been playing alongside each other in charity matches for the past decade, ultimately moving them to becoming close friends.

Both Prince Harry and Nacho regularly play in Sentebale’s charity matches to raise funds for Sentebale, an organisation co-founded by Prince Harry that supports children and young people affected by HIV in southern Africa.

Along with forming a special friendship with Prince Harry, the game of polo also brought him to his wife Delfina Blaquier, the daughter of an Argentinian polo player.

The couple now has four children together: Hilario; Aurora; Artemo; and Alba. 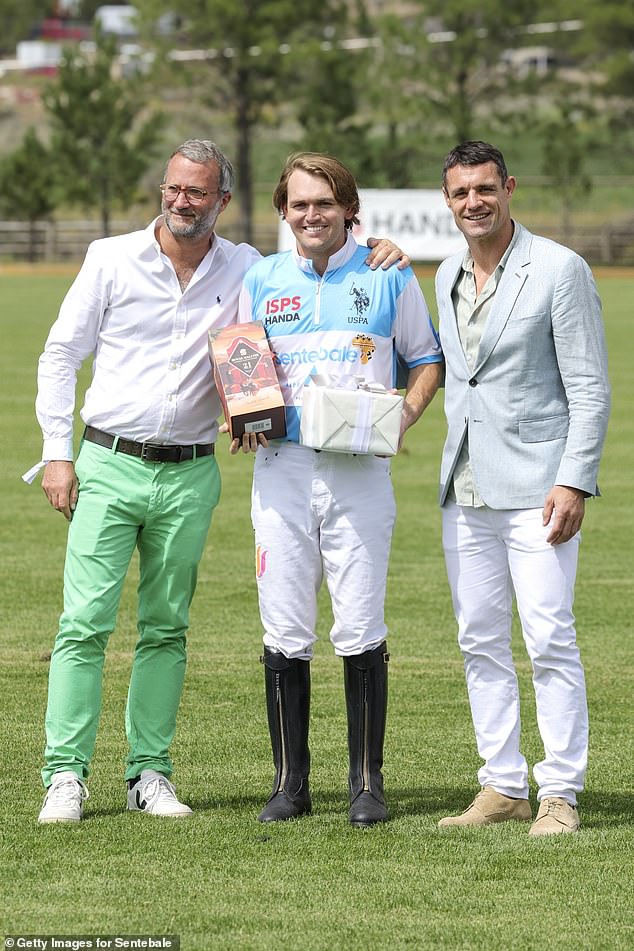 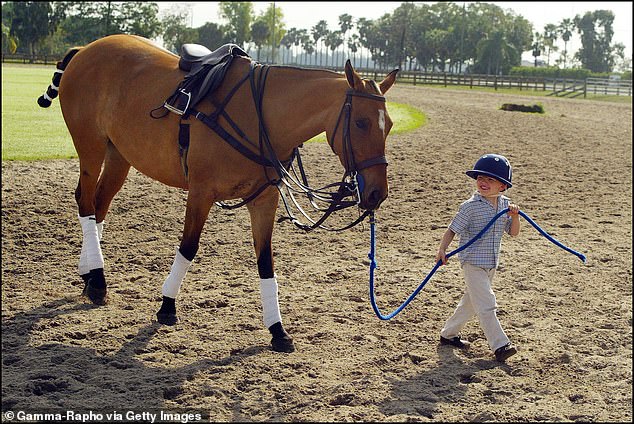 Grant Ganzi (pictured at four years old) has been playing polo since he was a very young child after his father Marc, also a polo player, introduced him to the sport 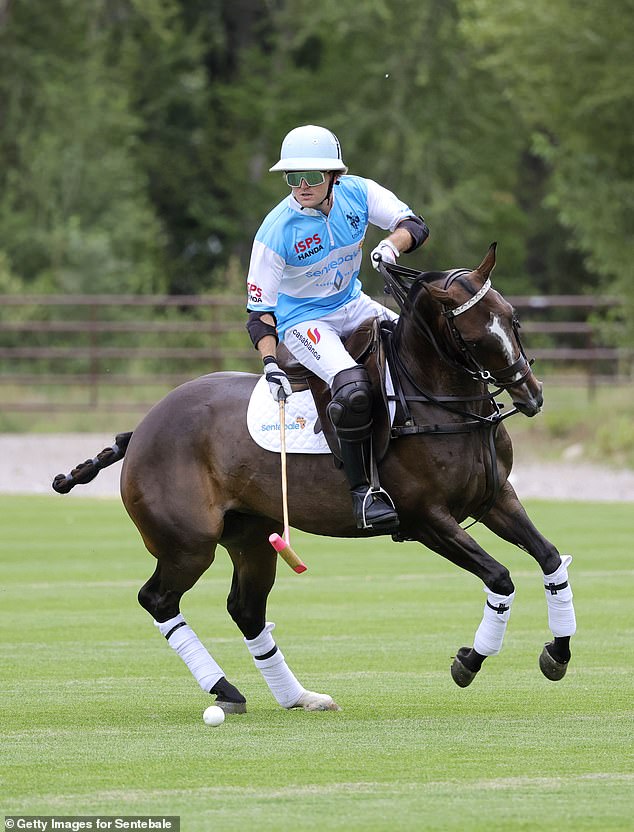 Grant, a keen polo player, took part in the charity match alongside the Duke of Sussex and  Nacho Figueras

Venture capitalist and polo player Grant Ganzi is based in Wellington, Florida and dedicates much of his time to charity work and fundraising.

The polo player has a girlfriend, Libby whom he often posts about on his Instagram page.

On the couple’s second anniversary, Grant posted several snaps of the pair, including one photo at a charity dinner in which blonde bombshell Libby is wearing a hot pink satin dress.

He wrote: ‘The best 2 years with you @libbymewbourne just some of the fun times we’ve shared. Love you.’

Other photos in the series included a snap of the pair on a log flume at a theme park and enjoying milkshakes together while accompanied by an adorable spaniel.

The couple also got dressed up in vintage costumes from America’s Wild West era and had a fun photoshoot with props.

Photos also suggest Grant and Libby took a lavish trip to Italy earlier this summer as they were pictured smiling on a boat at sunset.

Grant is the son of American businessman Marc Ganzi, who is the CEO of investment firm DigitalBridge.

It seems Grant followed in his father’s footsteps when he developed an interest in  polo as Marc has been playing for several years.

In 2013 he himself took part in the Sentebale Polo Cup and played on Harry’s team.

Marc is owner of the Grand Champions Polo Club in Wellington where the Ganzi family lives.

Despite brushing shoulders with the royals from time to time, Grant appears to dedicate much of his time to philanthropy and charity work.

He recently ran a Man and Woman of the Year fundraising event in aid of the Leukaemia and Lymphoma Society. 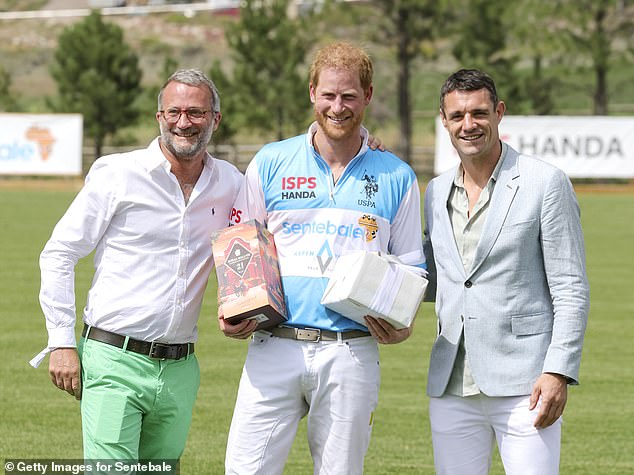 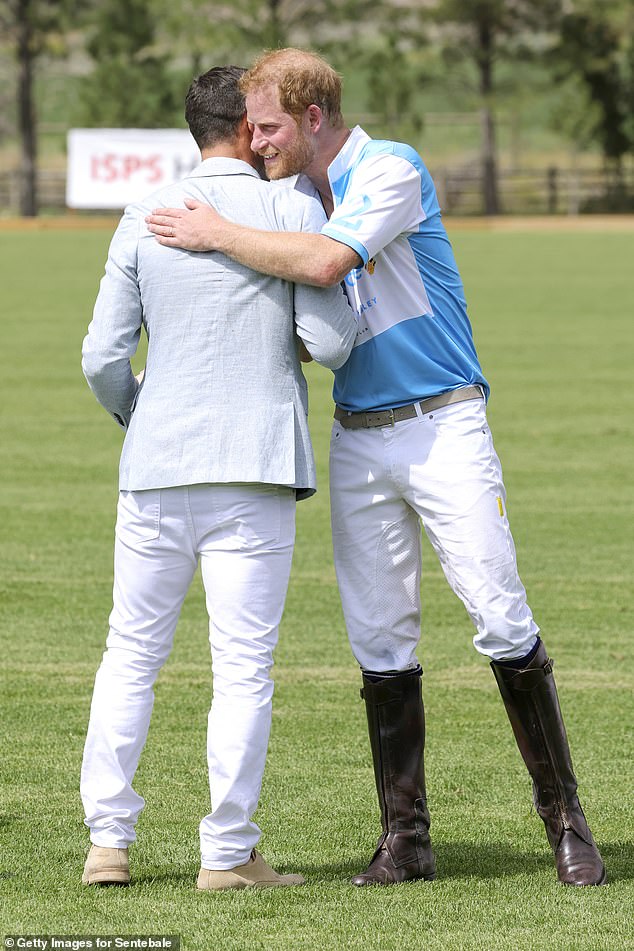 Dan, 40, embraced the Duke of Sussex as he presented him with the trophy after winning the charity match 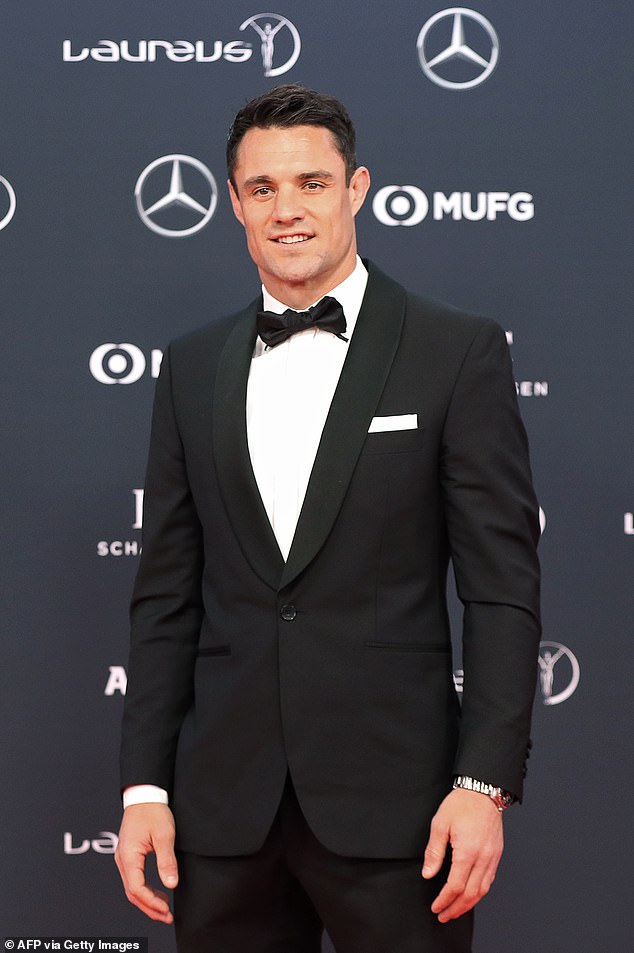 Many will recognise New Zealander Dan Carter as the captain of the All Blacks who was a two-time world cup winner during his career.

Dan, 40, retired from professional rugby in 2021 after being capped for New Zealand 112 times.

Announcing his decision on Twitter, Dan wrote: ‘I officially retire from professional rugby today. A sport I’ve played 32 years which has helped shape me into the person I am today.

‘I can’t thank everyone who has played a part in my journey enough, particularly you, the fans. Rugby will always be a part of my life. Thank you.’

While most people know Dan as a rugby man, he is also an ambassador for the non-profit International Sports Promotion Society.

He presented the trophies in Aspen on Thursday in that role, shaking hands with the Duke of Sussex and other big polo stars.

Dan himself doesn’t appear to be naturally gifted in polo, which he first played in 2012.

Posting a photo of himself on the field to his Facebook page in 2012, he wrote: ‘Trying my hand at Polo. I was awful!’

In his personal life Dan has been married to his wife Honor, a New Zealand field hockey player, since 2011.

Dan has previously referred to Honor as a ‘superwoman, mum and wife’ in interviews.

In 2004 and 2006 Honor was selected for the Commonwealth Games squad and played for her country a total of 68 times during her career. 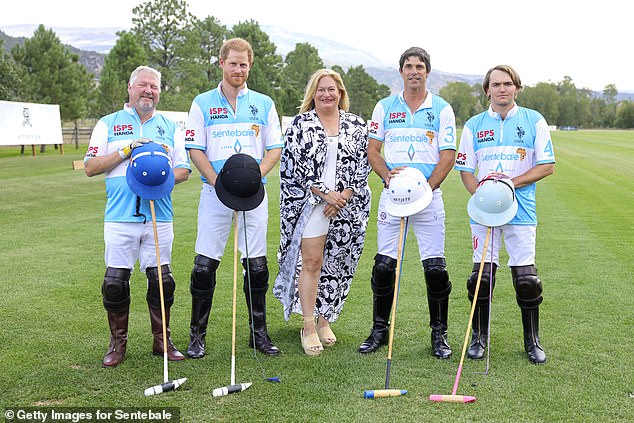 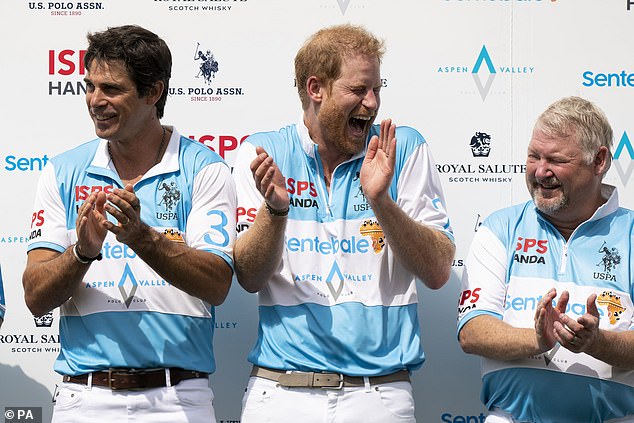 Steve Cox, from Oklahoma, is a keen polo player and a member of the Tulsa Polo Club.

Not an awful lot is known about Steve, but he knows the Duke of Sussex well enough to join his charity polo team so must brush shoulders with high profile people. 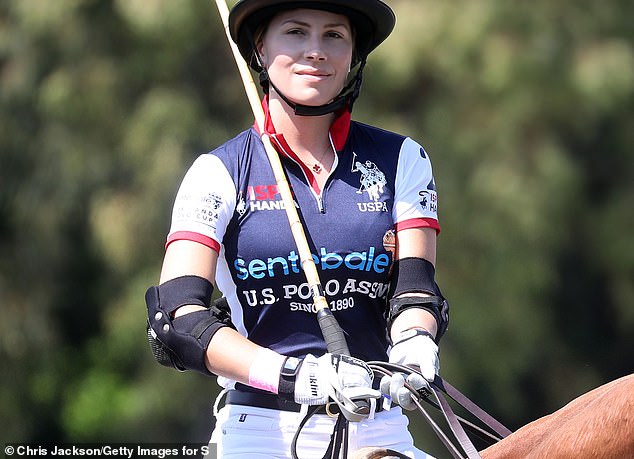 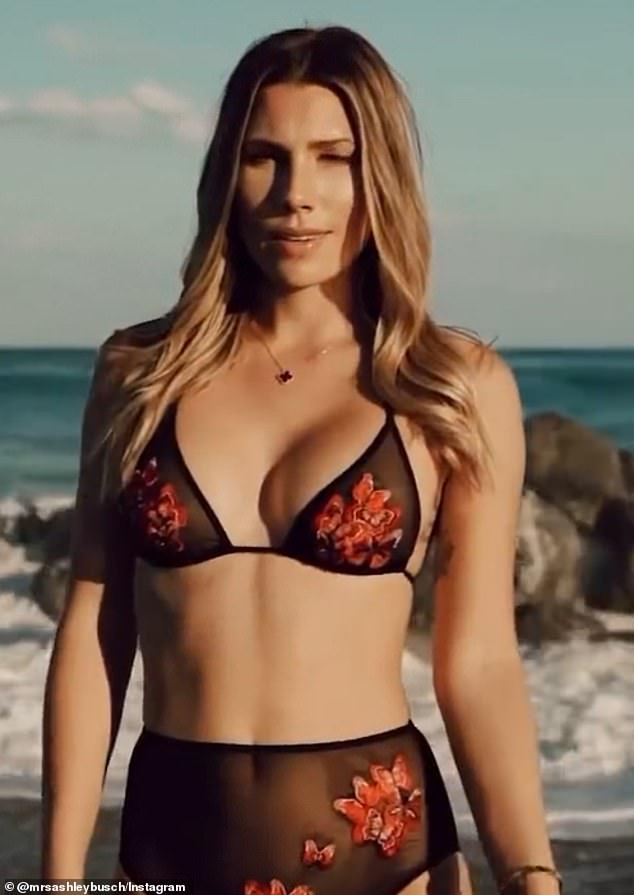 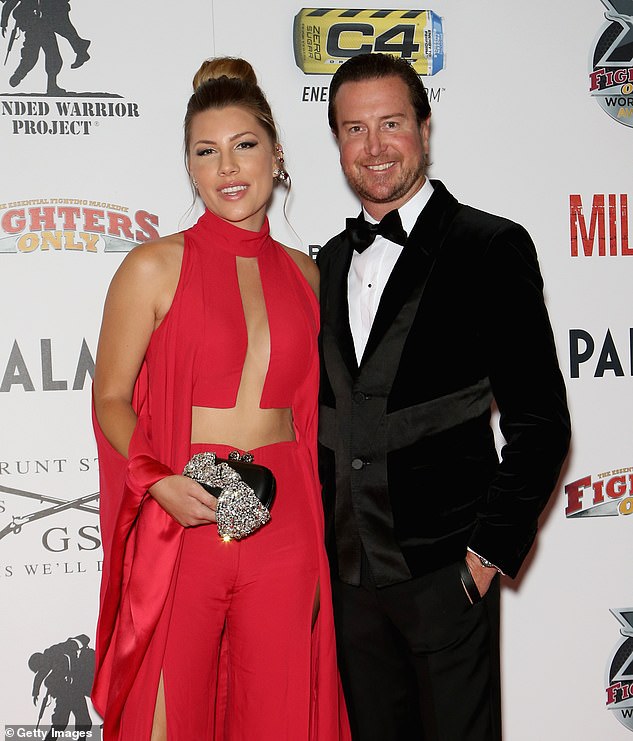 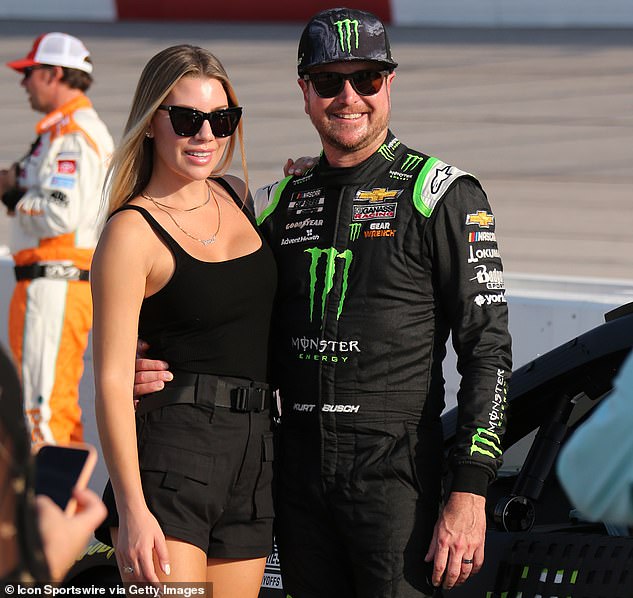 Ashley, 30, filed for legal separation from the 43-year-old athlete (pictured together last year) because their marriage was ‘irretrievably broken’

Ashley Van Metre played against the Duke of Sussex in Thursday’s charity match and shook hands with Dan Carter as she accepted the runners-up prize.

But the 30-year-old won’t have long to dwell on the loss, with her super-busy lifestyle taking up much of her time.

The model has been playing polo since the age of five and has played the sport all around the world including in England, Argentina and New York.

She was also named the U.S. Polo Association’s female global brand ambassador in 2017.

Away from polo Ashley launched a swimwear line, Beachy Chic, in 2018 and has expressed an ambition to branch out into other areas of fashion.

Ashley has previously said she wants to use her platform to empower women, and told Wellington Magazine: ‘My goal is to be a female face for polo as a sport and show women that they can do anything they put their minds to.’

Ashley is married to NASCAR champion Kurt Busch, 43, – although in May this year she filed for divorce from her husband of six years.

The couple’s wedding in St Barths in 2011 featured on the front cover of Southern Bride magazine, which described their big day as a ‘tropical paradise’.

They held their wedding reception at Palm Beach in Florida the following week, where Aerosmith front man Steven Tyler played for guests.

But it seems that after six years together the couple are in a very different place as Ashley claimed the marriage was ‘irretrievably broken’ after it had hit the rocks.

According to TMZ, she claimed Busch had cut her off financially by blocking access to their joint bank account and credit cards.

Ashley said the 2017 Daytona 500 winner demanded she leave the family home by the first week of June. She also admitted she had signed a prenup.

In response, Busch released a statement saying he was ‘heartbroken’ and wanted to resolve the matters in private.