The truth about whether or not Spoby really is endgame is no longer a mystery. Pretty Little Liars’ Spencer and Toby’s relationship status was revealed on the March 27 episode of the Freeform series’ spinoff, Pretty Little Liars: The Perfectionists. And — surprise — Spoby is now married. Even more shocking: The couple actually eloped, too, as was made known onscreen when Mona (Janel Parrish) called her friend Hanna (portrayed in PLL by Ashley Benson but not seen or heard in The Perfectionists‘ most recent episode titled "Sex, Lies and Alibis").

“What do you mean Spencer and Toby eloped? Even you didn’t know?” a flabbergasted Mona asks her old pal during the episode of the pair (played by Troian Bellisario and Keegan Allen in the original PLL series) . “Are they registered somewhere? Of course I want to get them a gift!”

Although old flames Spencer and Toby seemed to rekindle their love in PLL‘s June 2017 finale, fans never got explicit confirmation — and this news did them one better. As such, viewers were surely as thrilled as Mona, but it also raised some questions. Why didn’t Spencer alert her fellow Liars? How could Spoby deprive their devoted shippers of somehow seeing the nuptials play out onscreen? Anyway…

Shortly following the PLL finale, Bellisario was glad Toby didn’t put a ring on it by the series’ end. “Because of everything Spencer went through with her family, it’s more truthful for her to be at the beginning of something, tentatively moving towards being with Toby again,” the actor told TVLine. “If we had jumped to her instantly marrying Toby and running off with him, I don’t think it would have been true to the trauma she went through.”

Showrunner I. Marlene King told Refinery29 in a statment that being able to give updates on the OG cast was all part of her grand design:

That being said, Hannah, of course, also brought Mona up to speed on what’s going on in her life post-finale as well. During the aformentioned phone call, Hannah, who revealed her pregnancy at the end of PLL, also shared that, yes, she and hubby Caleb (Tyler Blackburn) did officially welcome a baby together. Mona gifted fans with that info ny beginning the call: "I just needed to hear a friend’s voice. How are you? How’s Caleb? How’s the baby?" Yay, Haleb! 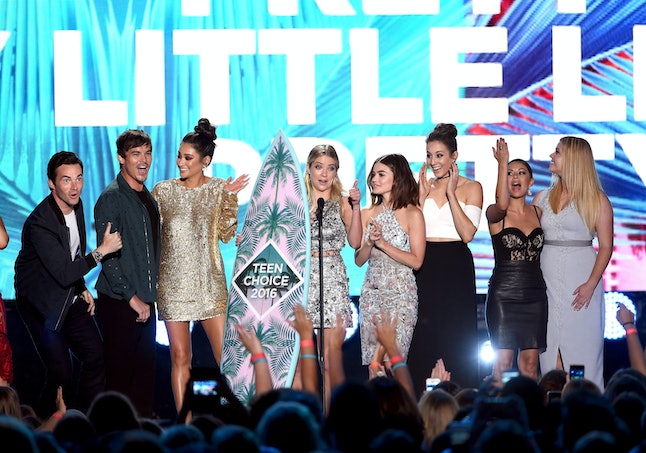 Given the Benson cried when Haleb temporarily broke up on PLL, she must be super psyched as well. "I was so upset. I was like, "You have to change it! There’s no other guy for Hanna," she told Entertainment Tonight in 2016. "I thought we were going to get married, have kids, and then I find out that we’re breaking up. I think I was the most depressed out of any of the fans."

Luckily Haleb eventually got their happy ending, and, thanks to Perfectionists, fans now know that Spody got theirs as well.

03/28/2019 lifestyle Comments Off on ‘Pretty Little Liars: The Perfectionists’ Had The Best Spoby Relationship Update
Recent Posts
We and our partners use cookies on this site to improve our service, perform analytics, personalize advertising, measure advertising performance, and remember website preferences.Ok