“Mrs Windsor, would you live at Rumbalara? Then why is it good enough for us?”

Mrs Windsor is the absent Queen and, no, of course she wouldn’t. The woman petitioning her for better housing is Gladys Banks (Dalara Williams), an Aboriginal woman who lived with her family in a humpy on “the flats”, which flooded with each big rain, until the government moved them to a concrete box at Rumbalara (Rainbow’s End) with “no doors inside”.

Despite losing her husband in World War II, and having her education cruelled by domestic labour in a white family’s home, Gladys is a complex mix of lofty dreams and pure grit. Her character is illiterate, yet has an activist’s way with words, and the ability to make the political deeply personal. 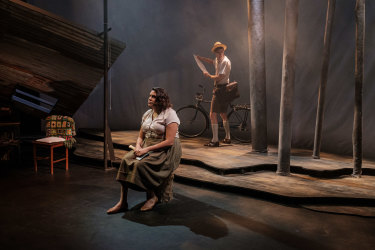 Bringing to stage the personal impact of Australia’s assimilation-era politics is playwright Jane Harrison’s achievement here, too. She wrote Rainbow’s End in 2005 to tell the stories of the “unsung heroes … in particular the women who fought the good fight in their daily struggles”.

Central to the family’s struggles is a peace that is constantly pecked at by paternalistic power-brokers. A housing inspector, a chairman, a landlord and a bank manager are all played with repellent benevolence by Frederick Copperwaite, each part embodying a slightly new, yet equally fetid, twist on the myth of well-meaning-ness that sustained assimilationists’ self-belief.

It’s a play about dreams, too. Gladys dreams of a bigger, better life for her kids. Family matriarch, Nan Dear (Lily Shearer), has learned the hard way to cradle smaller dreams closer to her heart, where no-one can take them away: returning to her Murray River country, feasting on swan eggs. Dolly, played by Phoebe Grainer with light-up-the-room radiance, dreams with the confused, defiant romanticism of any 17-year-old girl.

At times, the 1950s-era English brings a stiffness, to the dialogue and fewer entries and exits of the cast would be less visually disruptive. Yet neither leach the play of the conviction you feel that it will attain classic status.

Classic, because it’s based on a shared history that won’t simply vanish or be hurried into healing. But also because it’s still topical, as highlighted by Aunty Millie Ingram’s call, in her welcome to country, for the Uluru Statement to be implemented.

As Harrison writes of the Aboriginal women she was seeking to honour: “Aren’t we all still fighting that good fight?”