Latrobe Valley residents have asked new federal Environment Minister Tanya Plibersek to scrutinise a controversial proposal to flood the enormous Hazelwood coal mine pit to make a lake, citing concerns about future water availability in an era of climate change.

They want Plibersek to apply a “water trigger” to the proposal under Australia’s national environment laws, which subjects large coal mines to a rigorous assessment of the project’s potential impacts on surface and groundwater. 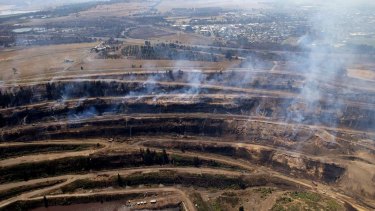 A picture of the Hazlewood coal pit on fire in 2014 gives a sense of the size of the area that ENGIE has proposed to turn into a “pit lake”.Credit:Jason South

It’s estimated the “pit lake” would take up to 25 years to fill and require almost double the amount of water Melbourne consumes in a year.

Environmental Justice Australia made the submission to Plibersek this month on behalf of Friends of Latrobe Water and Environment Victoria. It asked her to apply the “water trigger” under the Environment Protection and Biodiversity Conservation (EPBC) Act.

“The water trigger exists because water in this dry continent is precious and vital for life, and lawmakers recognise communities expect careful scrutiny of large mining projects to examine their impact on water,” said Environmental Justice Australia lawyer Chloe Badcock.

“Our environment minister … is legally obliged to scrutinise mining proposals for how they might harm our rivers, wetlands and groundwater, and impact our drought-prone communities.”

Hazlewood’s owner, global energy giant ENGIE, wants to fill the enormous empty coal pit with water from the Latrobe River and an underground aquifer to create an artificial lake.

Hazelwood closed in 2017 and the rehabilitation of its pit will set an important precedent for the future cleanup of two smaller coal mines in the Latrobe Valley that are scheduled to close eventually.

An inquiry into the coal fire that burned for 45 days at Hazelwood in 2014 found that using water to create “pit lakes” was likely to be the most viable way to achieve safe and stable rehabilitation of the mines and would reduce fire risk.

But it acknowledged “significant knowledge gaps” existed regarding this rehabilitation approach and recommended further investigation. State government modelling shows that since 1995, stream flows in the Latrobe basin have dropped almost 30 per cent.

The EPBC Act requires proponents of large projects to refer them to the minister and advise them which “controlling provisions” apply – those matters the project is likely to have significant impact on. The minister must decide which provisions apply and set the framework for the assessment of the project.

Many in the Latrobe Valley are concerned about the pit lake proposal and fear it will have a devastating impact on local river systems for generations, says Tracey Anton, a spokesperson for Friends of Latrobe Water.

“Our rivers are in a poor state – there’s not enough water going down them now and not enough water to fill the mines,” Anton said. “Where is this water [for the pit lake] going to come from? There’s no clarity.”

ENGIE’s project referral to the minister identifies the potential for impacts on Ramsar-listed wetlands, threatened species and endangered communities, and migratory species.

But in the case of the water trigger, the company’s assessment is that the rehabilitation works do not comprise a “large coal mining development” within the meaning of the Act, a spokesperson for the company said.

The rehabilitation of Hazlewood started about five years ago. The old power station was demolished, mining and other infrastructure removed and remediation work started.

In February, the Victorian government determined the mine lake proposal should be assessed through an environment effects statement process.

This month’s long-delayed State of the Environment report found Australia’s inland waterways, including in the Murray-Darling Basin, are under increasing pressure.

Get to the heart of what’s happening with climate change and the environment. Our fortnightly Environment newsletter brings you the news, the issues and the solutions. Sign up here.