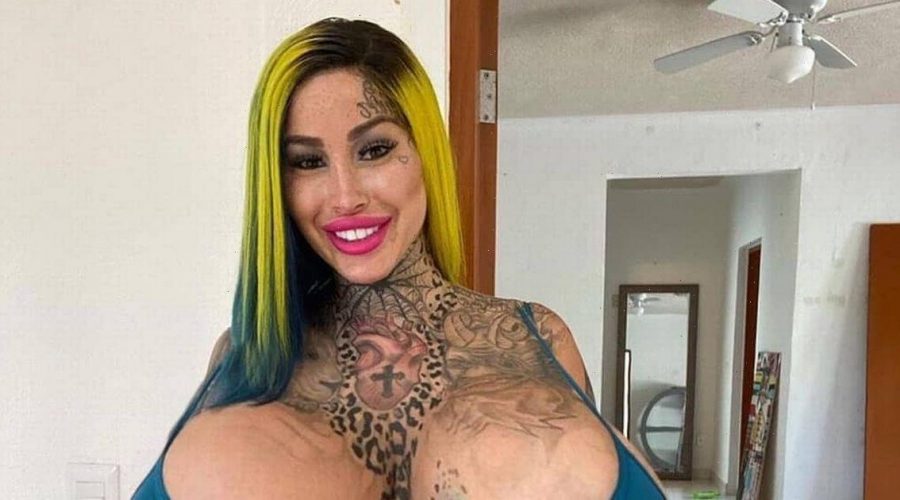 A model addicted to plastic surgery and on a mission to get the 'world's fattest vagina' has shown a picture of what she looked like before the filler and operations.

The 24-year-old Canadian, who calls herself Mary Magdalene online, has used 3000cc expanders to give herself XL cleavage and regularly undergoes fillers so she can achieve her "blow-up doll" look.

Proving she was just once an ordinary girl, Mary shared a snap of herself as a child on her Instagram account for her followers to see.

Uploading two pictures, in the first the model could be seen as just a child before she had any work done.

Her lips were noticeably much, much smaller and she wore a sweet little dress with a pretty collar.

Clutching at what appeared to be a doll, she smiled sweetly while appearing to be standing in a crowd of children singing on a stage.

In the second snap, a much younger Mary could be seen with blonde hair as she posed for a photo in front of a toy castle with three boys.

The tot was wearing a very cute pink top with white bunny rabbits on it and her hair was held up by a pink bow.

In the caption for the pics, Mary wrote: "Throwback Sunday."

The model has previously recalled how she wants "an open mouth that never closes" and lips that are so big they touch the tip of her nose.

She’s also on a mission to get the “world’s fattest vagina” so has been getting injections “down there”.

She also often films herself in silence showing off her curvy figure from a number of angles as she poses for the camera.

The model recently filmed herself dancing in what appeared to be a shopping mall in a top that seriously struggled to contain her huge assets.

It comes as other plastic surgery fans have also been busy upgrading their looks.

And a model left with 'botched' booty after spending £7k on dodgy butt injections.