The question I am most often asked these days, by everyone from cabbies to supermarket staff, is: ‘What time do you have to get up for Good Morning Britain?’

The answer is 4.45am, and my long-suffering wife has always said she’s happy for me to continue presenting breakfast television, so long as she doesn’t also get woken at 4.45am.

Celia and I rarely argue, a marital oddity that baffles our friends, not least my TV wife Susanna Reid, who finds it impossible NOT to lock horns with me constantly like an enraged stag. 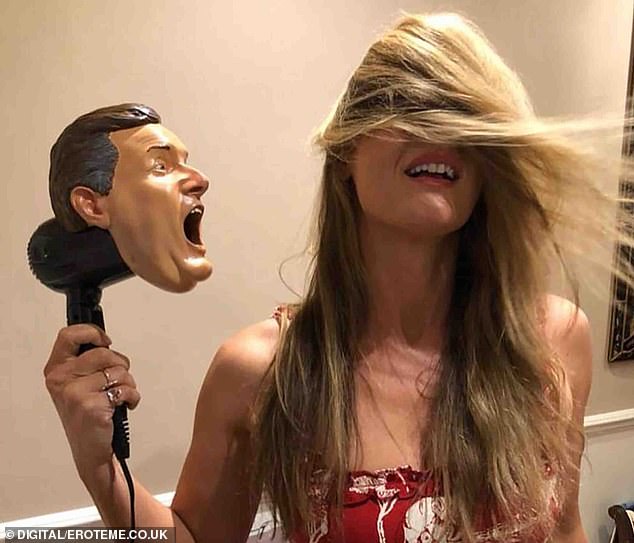 ‘Celia and I rarely argue, a marital oddity that baffles our friends, not least my TV wife Susanna Reid’ (Above, Celia with a novelty Morgan 3000 hairdryer)

But this morning our wedded serenity was threatened as never before.

To ensure my creaking carcass gets out of bed on time, I set alarms on two phones, one to go off ten minutes after the other.

They’re both on escalating volume, so when they detonate I race to switch them off fast enough not to wake Celia. This system usually works well, but today I woke at 3am and couldn’t get back to sleep.

So I got up to watch TV – taking a phone with me.

Later, I had a leisurely shower, leaving the phone temporarily on the stairs, out of sight and hearing, and then left the house at 5.15am. It was only while I sat in GMB’s make-up room at 6.15am that a horrific thought suddenly hit me: I hadn’t heard either alarm go off, and they definitely hadn’t turned themselves off.

When I saw Celia again at 9.15am she looked like one of my Killer Women interviewees – vacant-eyed and murderous. ‘Did I forget…?’

It was only tonight that I realised the full severity of the situation when she suggested we watch the new BBC mini-series Us. The first scene features a woman waking up her annoying husband in the middle of the night to say: ‘I’ve been thinking about leaving. I think our marriage might be over.’

They both turned up early. Footballers and soap stars tend to be very punctual because their daily working lives depend on them arriving for training sessions or strict filming schedules.

‘Players are fined thousands for being a few minutes late,’ Gary explained. ‘It stays with you.’

As does his extraordinary discipline with his weight.

Gary, 60 in November, is still the same 12st 5oz he was when he first played for England 36 years ago.

Yet he happily gorged on platefuls of delicious Spanish food tonight, washed down with lashings of fine wine from the city where he once plied his trade, Barcelona.

‘Good metabolism,’ he said, raising a mocking eyebrow at my own lockdown-expanded waistline.

‘Good bowel movements, more like,’ I retorted. (Lineker once suffered a spontaneous outbreak of diarrhoea on the pitch during an England game.)

I’ve been mates with him for more than a decade and he’s a genuinely good bloke; a loyal, generous and amusing friend.

Yet he’s been pilloried in recent years for being the BBC’s highest-paid star and for his liberal tweeting about issues such as refugees. ‘When are YOU having one in YOUR house, Lineker, you hypocritical ****!’ cry the Twitter imbeciles.

Well, this month he’s announced he’s taken a substantial pay cut at the BBC (Zoe Ball now earns more than him, and is already getting all the aggro he used to get) and is taking in an asylum-seeker to live in his West London home.

I believe that’s called putting your money where your mouth is… and sticking the trolls’ taunts where the sun don’t shine.

Not that trolls bother him. ‘When you’ve had a defender like Andoni Goikoetxea [the infamous “Butcher of Bilbao” who once broke Maradona’s leg] trying to kick you all game, you get used to riding nasty tackles.’

‘I’ve had four marriages, ten affairs, four children [one died falling from the roof of The Queen Vic], been buried alive in a coffin in the woods, run over, framed for murder, imprisoned and suffered a failed suicide attempt,’ he chuckled.

He revealed the extraordinary lengths EastEnders is having to go to on set to be Covid-safe. ‘There are very strict social-distance rules,’ he said, ‘so we have to do all the intimate scenes through Perspex screens.

But to make things more realistic, the real-life partners of some of the cast have been coming on set in wigs to do the actual kissing!’

I was very sad to hear that Fleet Street legend Harry Evans has died, aged 92. Harry, as many others have attested, was the greatest newspaper editor of them all – a fearless, doggedly campaigning journalist who held people in power to account like no other, especially with his devastating Sunday Times exposé of the Thalidomide scandal.

He was also very kind, especially to fellow hacks. When I joined CNN in 2010, he and his wife Tina Brown – herself one of the great magazine editors – threw a lavish, star-studded ‘Welcome to New York!’ party for me at their beautiful Manhattan home and offered all manner of priceless introductions and pearls of Big Apple media wisdom.

Harry’s best advice for investigative reporters? ‘You don’t know a f***ing thing, so go and ask a lot of questions and find out.’ RIP.

Celia’s latest Daily Telegraph column contains a piece about BBC’s Us, in which she writes: ‘Women enjoy the rubber-necking aspect, getting a perverse, fourth-wall-breaking thrill at imagining the worst.

And maybe it wouldn’t actually be the worst? Now that I think about it, Us makes divorce look less like the end… than a fresh start.’

Anyone know a good lawyer?

10/04/2020 lifestyle Comments Off on PIERS MORGAN: My wife looked like one of my Killer Women subjects
Recent Posts
We and our partners use cookies on this site to improve our service, perform analytics, personalize advertising, measure advertising performance, and remember website preferences.Ok