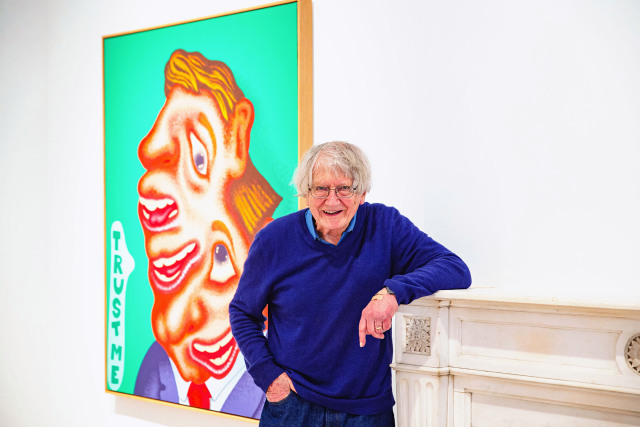 “The big enemy of modern art is there’s too much of it,” says Peter Saul on a recent rainy May morning. “I’ve been showing pretty frequently since about January 1962, but it hasn’t been noticed very much — there are so many thousands of artists doing art shows all the time.”

The 86-year-old Pop painter has been having a moment in the spotlight. Last year the New Museum mounted the first North American retrospective of the artist’s provocative, complicated, and often jarring, colorful works. Saul, who lives and works in upstate New York in the Catskills with his wife Sally, saw the “Crime and Punishment” retrospective twice — for the opening in early 2020, and more thoroughly in September, mid-pandemic. This spring, the artist’s newest paintings are being exhibited in concurrent gallery shows at Venus Over Manhattan and Michael Werner Gallery, 10 blocks apart in the Upper East Side.

“I’m getting along well with critics now. I’m very surprised. Sally thinks I should grow up and accept success more, embrace it,” says Saul. “I try not to concentrate on art appreciation. It goes where it wants. I didn’t understand this in 1962, why my work wasn’t immediately appreciated,” he adds. “I mean, I’m still trying to do the same kind of thing: make the pictures individually interesting. If the picture is individually interesting, it’s a good one.”

Saul aims to provoke — provocative gets noticed. His satirical work often takes violence and grotesque to an extreme, sometimes tilting into the danger zone of a neighboring category: offensive. The New Museum retrospective included several early works that Saul describes as “ill-advised,” some of which read differently in 2021, including depictions of the activist Angela Davis.

“Everybody [at the museum] was very afraid because of Dana Schutz’s experience at The Whitney. That scared everybody, including me somewhat,” says Saul, referring to Schutz’s controversial painting “Open Casket,” part of the 2017 Whitney Biennial. “Every artist makes mistakes; I do, too. But politics has been a very good subject. I enjoyed trashing Ronald Reagan,” he says, adding that particular subject proved less controversial than others. “I’ve never met anybody who was in favor of the Vietnam War.” 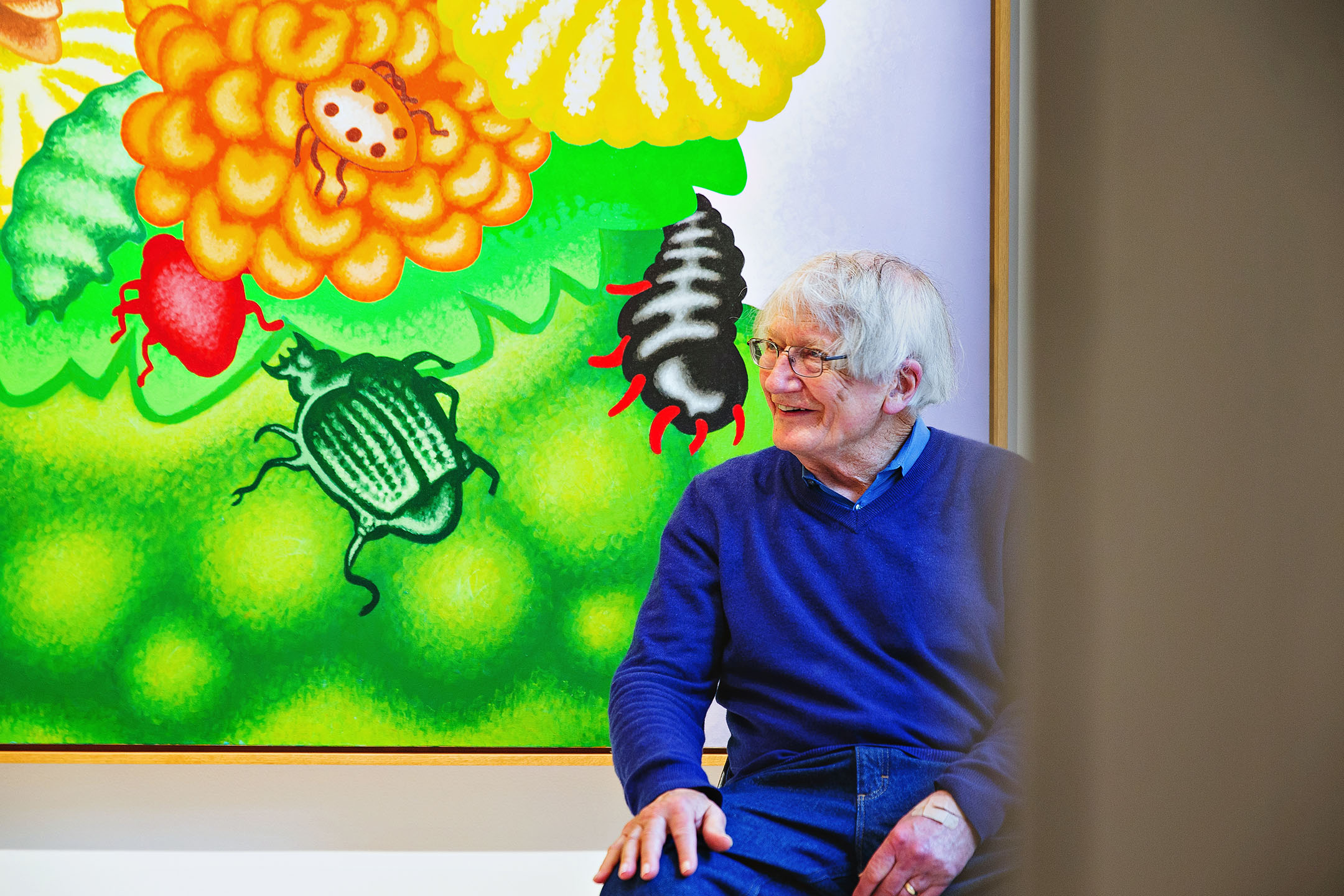 Despite his past provocative renderings of politics, Saul steers further from current events with his latest works. “I don’t see it as a good subject right now. Probably too much encouragement to do it. I try not to go the route of massive amounts of artists, and I try to avoid that very much because I don’t feel I’ll stand out,” he says. “ It’s been a worthwhile subject matter; it’s done well for me. My pictures of Trump have finally been appreciated. I only did him five times all together I think, because everybody got there first.”

Saul pauses, glances around. “Gosh. Have I just used up all my anecdotes? I’m in a really good mood because I think my pictures look good here.”

The gallery exhibition is tame compared to some of his other paintings but provides the viewer the opportunity to discover something new in his work. There are still lifes of flowers — at Venus Over Manhattan the flowers charmingly teem with insects, at Michael Werner the flowers are under human distress.

“I did flowers because I haven’t done flowers my whole life — I’m 87 years old — almost, in a couple of months — and I never painted flowers. It hadn’t occurred to me,” he says. “It’s important to paint unexpected pictures, so as to keep yourself and other people’s imagination alive.”

The gallery walls also include surrealist portraits of suburban life, portraits that reflect distorted truth, and commentary on the artist-critic relationship — all with a touch of humor. Politics is still there, it’s just more obtuse.

The most recent paintings completed for the exhibitions are two New York landscapes (one in each gallery). Saul has only painted the city once before, and he wasn’t happy with how it had turned out. This go-around, Saul wanted to portray what he saw as the city’s defining activities. “Two things happen: taxi cabs run amok, and money changes hands,” he says.

Saul’s day-to-day has changed little in the past year; he continues to work in relative solitude. The stretcher bars are built by a local carpenter and delivered, and Werner gallery sends someone over to staple the canvas. All he has to do is paint. Saul works without assistants — “thumbs down on that” — and when a work is finished, someone comes by and whisks the paintings away to a neutral warehouse. His life reflects the simplicity he aspired to when he was first starting out.

“My idea of my life was I was going to find an art dealer I can send the work to, and he would send me money in return, and I’d never had to meet anybody,” he says. “Just me, a woman, a bunch of cigarettes, and smoke, and that’s it.”

Saul and his wife Sally, a ceramicist, planned to spend the next few days in the city working through a list of art shows to go see. They’d already stopped by the Metropolitan Museum to check out the Alice Neel retrospective; the Kaws retrospective at the Brooklyn Museum was also on the list (notably off the list: Frieze). Saul describes Brian Donnelly as his “best collector,” as well as elusive — just like popularity.

“Art appreciation is a mystery. How it ever gets appreciated or why not — I just hardly understand it, frankly,” says Saul, before throwing a wrench into the art world machinery.

“I don’t think modern art gives a lot for the price that’s asked for it,” he adds, looking around the pristine gallery walls decked with his paintings, his face allowing a mischievous smile — surely, he means other modern art, the kind that generates multi-multimillion-dollar auction frenzy beyond gallery walls. “We’re in sacred territory here,” Saul says, punctuating the thought with a signature chuckle. 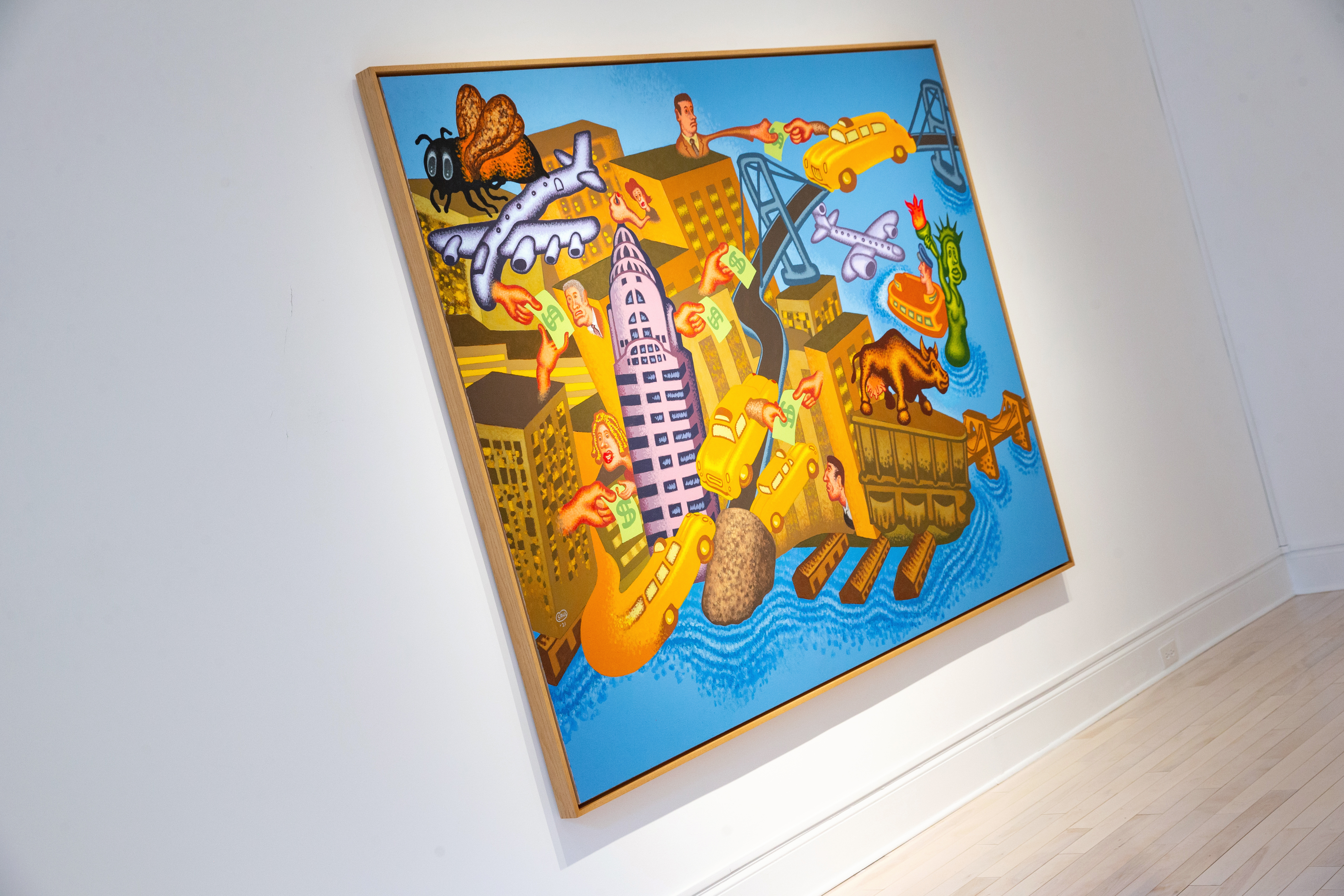 More From the Eye:

Painter Francesco Clemente on the Journey of Our Times