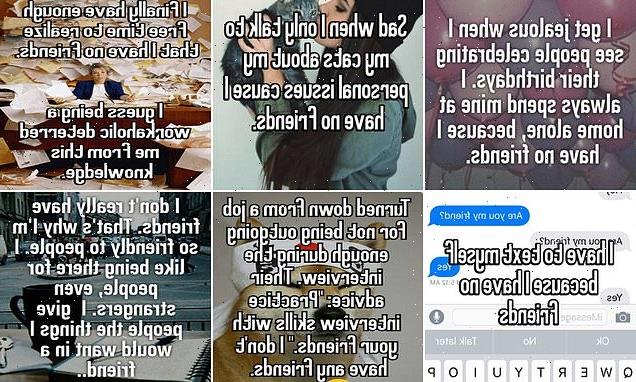 All by myself! People reveal how they cope with not having any friends – from texting themselves to talking to their cats about their problems

Friendships can be just as important as strong family bonds when it comes to building a support network, but what’s it like to go through life with no friends?

People from around the world took to anonymous sharing app Whisper to reveal how they cope without having anyone to speak to about their problems or socialise with.

Among the confessions was an individual, from Texas, who admits to feeling jealous when they see other people celebrating their birthday with friends because they always spend they day alone at home.

Another person from Virginia admitted that they send themselves text messages, knowing they won’t receive them from anyone else. 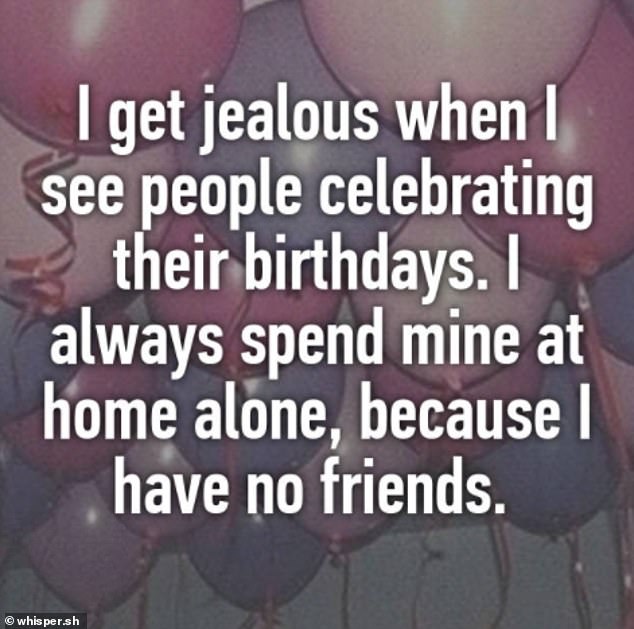 Whisper has rounded up a selection of anonymous confessions from around the world written by people who claim to not have any friends – including an individual from Texas, who admits to getting jealous when they see other people celebrating their birthday 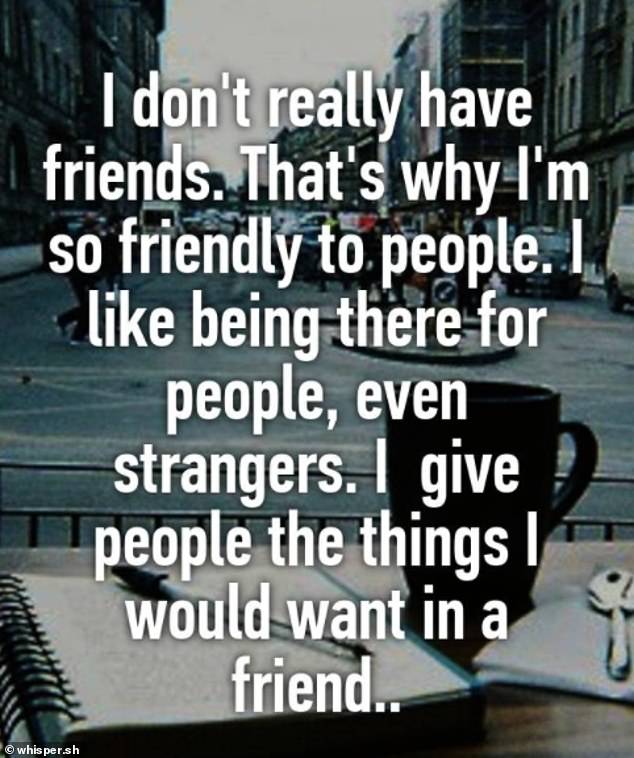 One person, who lives in New Jersey, admitted they are extremely friendly to strangers because they try to be what they would want in a friend 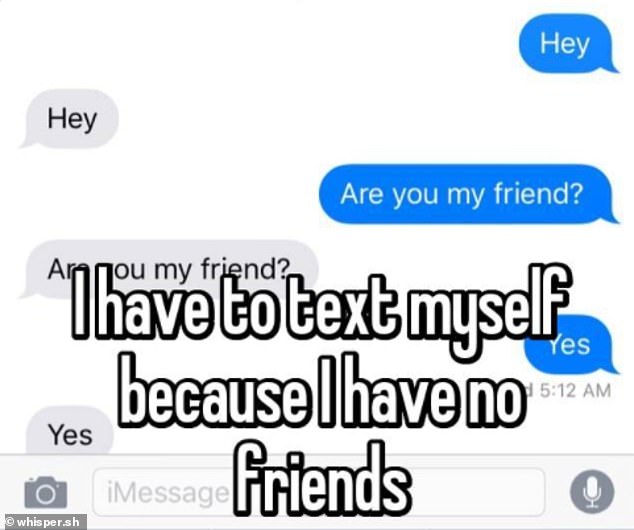 Another individual from Virginia, confessed they often send text messages to themselves because they have no one else to speak to 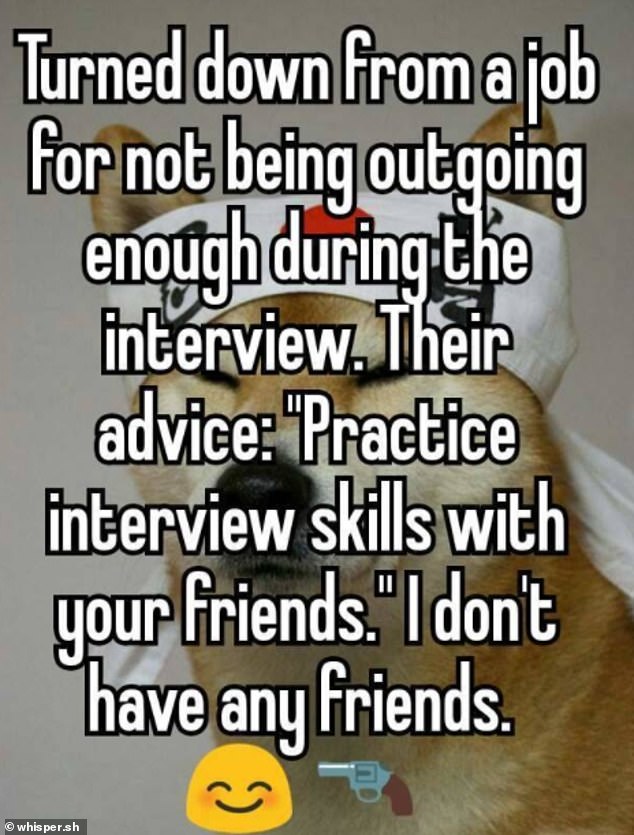 A jobseeker, who lives in London, shared the challenges of trying to follow an interviewer’s advice without having any friends 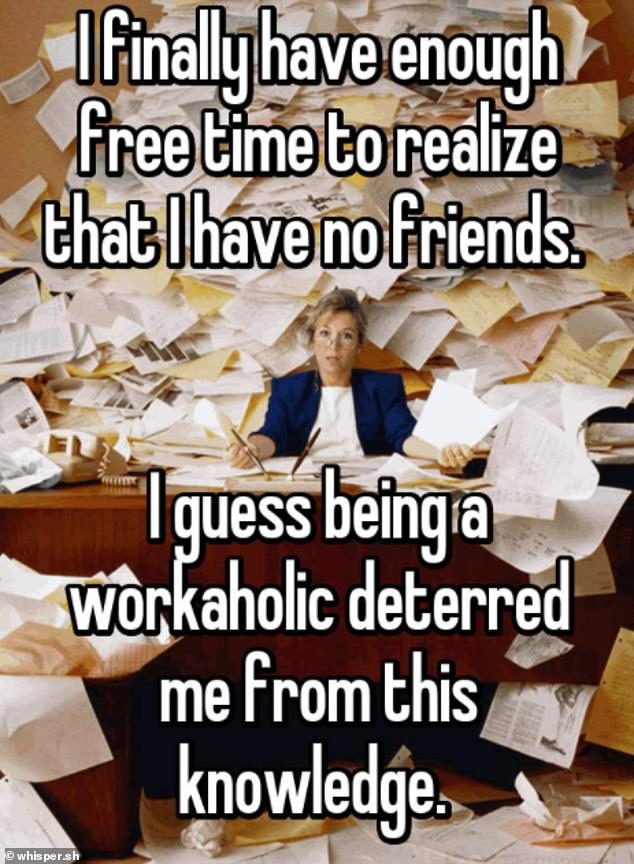 One person, who lives in New Jersey, claimed they didn’t realise their lack of friends until they spent time away from work 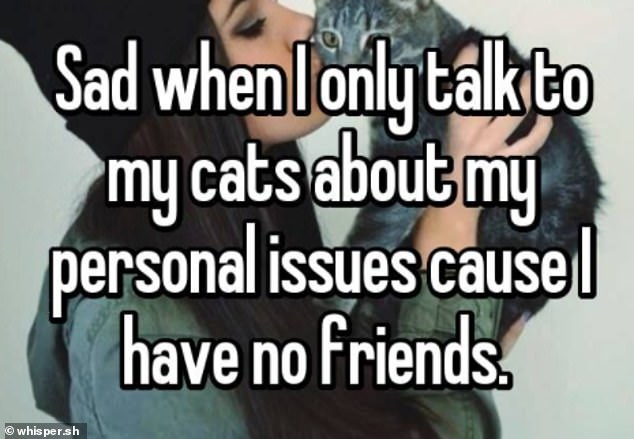 Another lonely person, from Livonia, confessed they’ve turned to speaking to their cat about any personal issues 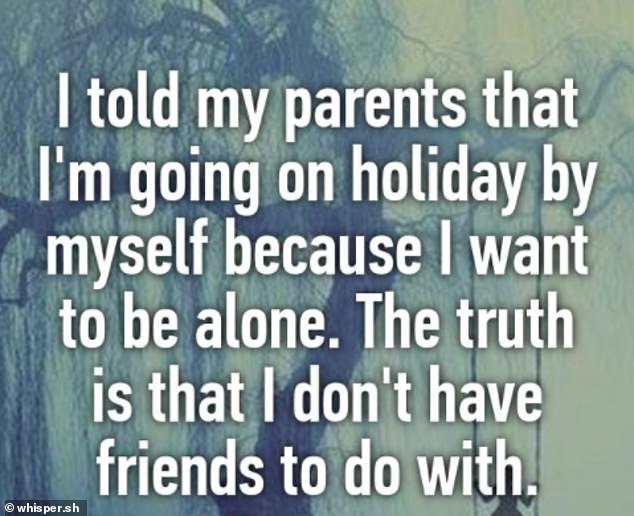 Posting from an unknown location, one person revealed they’ve told their parents they want to be alone instead of admitting that they don’t have any friends 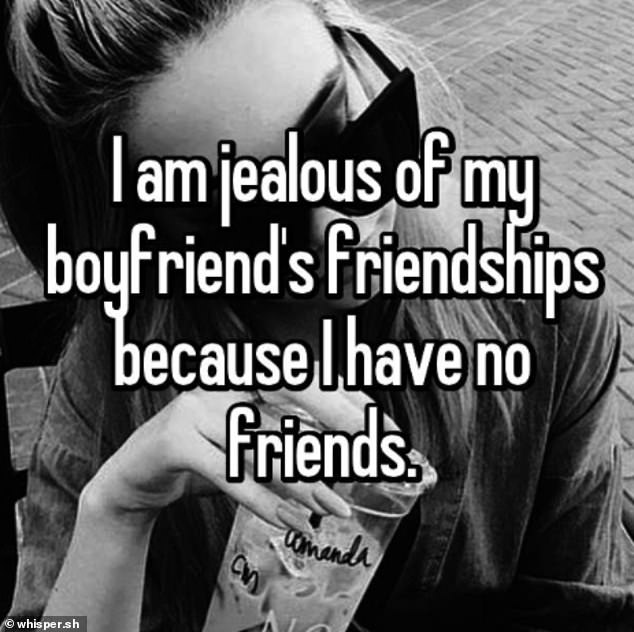 A woman from Indiana, confessed to being jealous of her boyfriend’s friendships because she hasn’t got any mates of her own 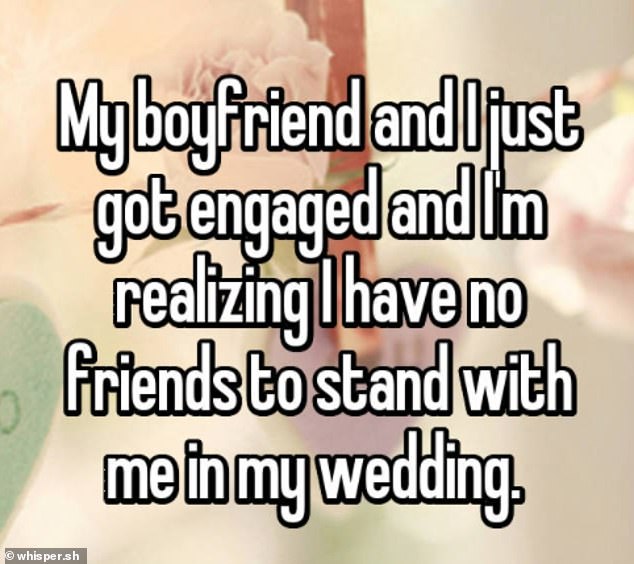 A woman, who lives in Texas, shared the heartache of not having any friends to stand with her at her wedding 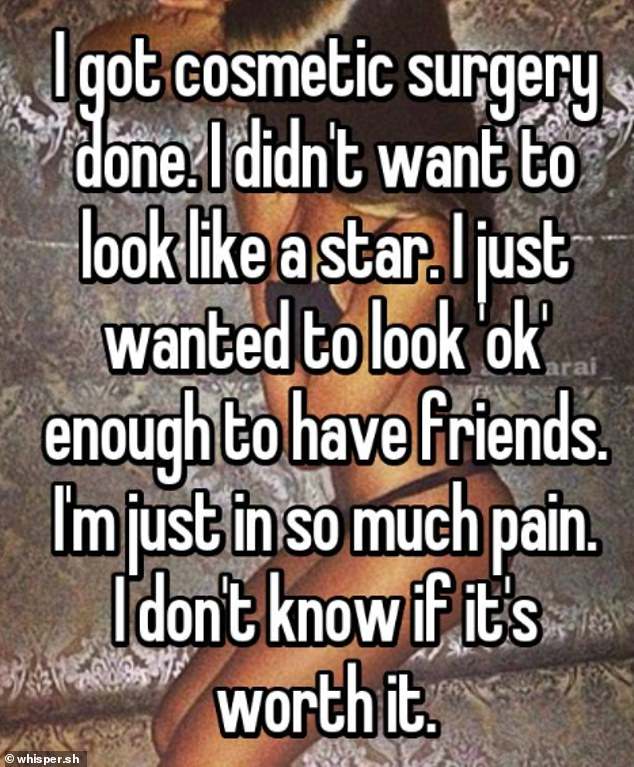 One person, from an unknown location, said their desire to have friends has led them to have cosmetic surgery and they don’t know if it’s worth it 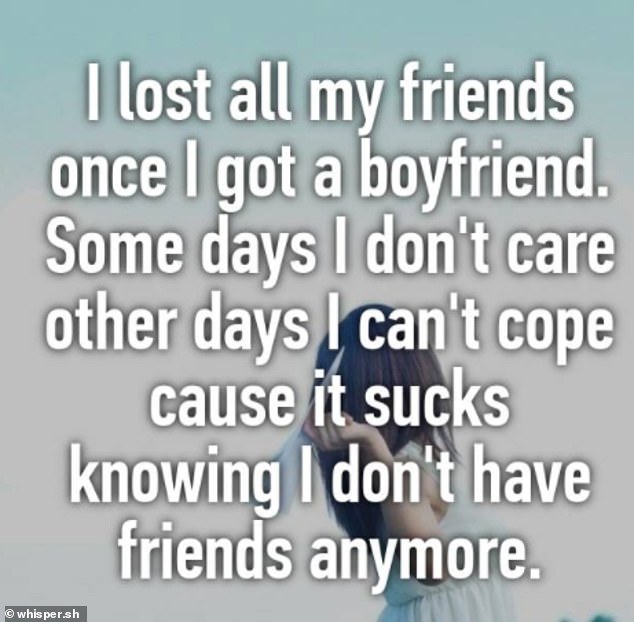 Another anonymous individual, who lost their friends after getting a boyfriend, said how they feel about not having friends changes daily 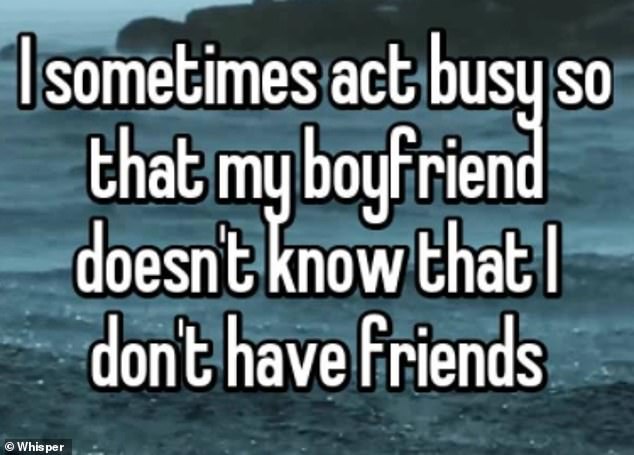 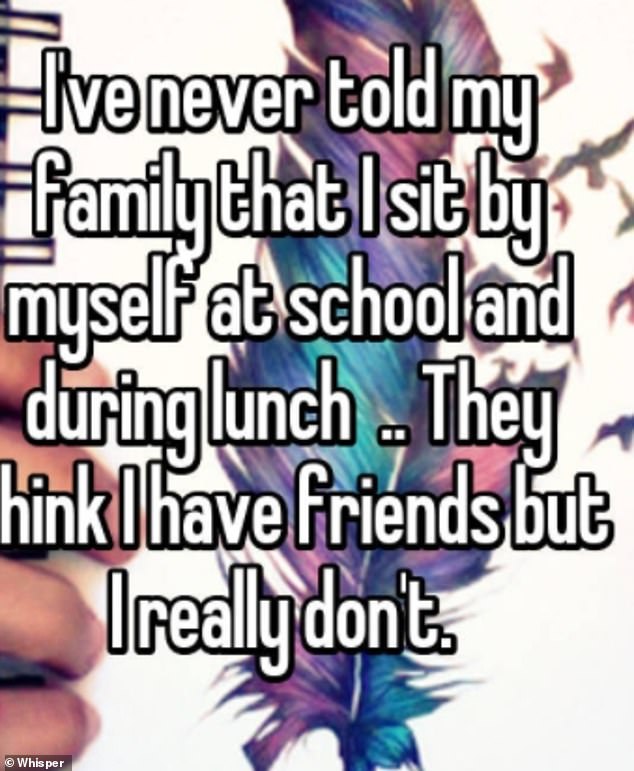 This student admitted that they have to sit alone at school because they have no friends, but their family doesn’t know 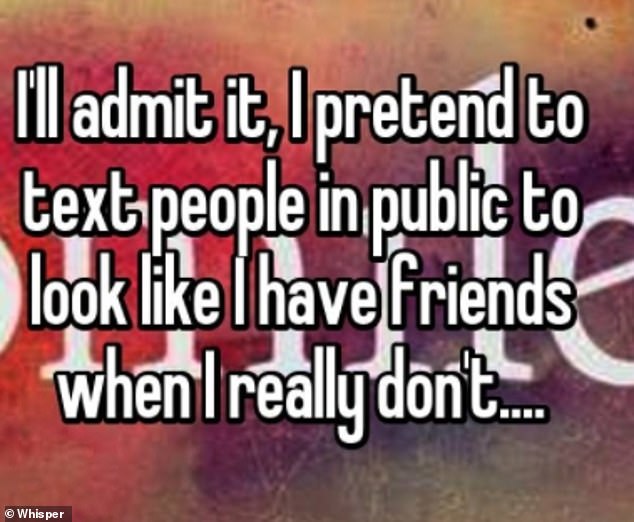 Fake it until you make it: This person creates the illusion of having people to speak to by pretending to text 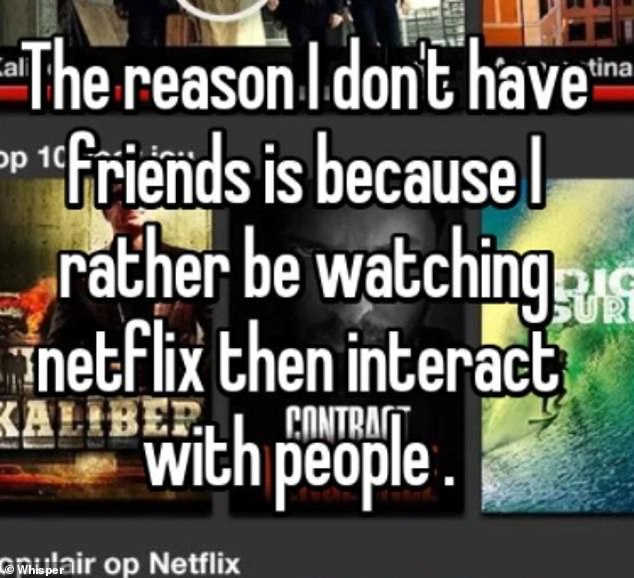 At least their honest! This Netflix fan revealed they would rather be in front of a screen than interacting with other people