One day, on a suburban bus, a woman gets on and sits next to a man. They start a conversation. Behind them, rows of passengers listen in, drawn into to the pair’s discussion as the bus moves off and the city’s landscape starts to slide past the windows.

Who is the man? Why is the woman asking him questions? Where is the bus going and what is waiting at the end of the journey? 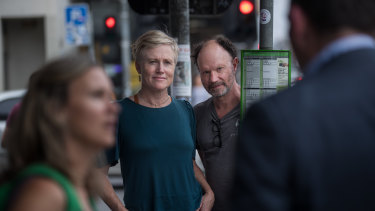 This is the beginning of immersive theatre work Passenger, a free, hour-long site-specific production set almost entirely on a bus. Co-created by theatre directors Jessica Wilson and Ian Pidd, the work explores corporate capitalism and ways the world observed through a moving window can simulate an ever-developing movie narrative.

“We wanted to develop a piece of theatre, a narrative-based sense of dramatic tension from beginning to end, within the bus,” Wilson says. “It’s holding the audience in a narrative as the bus moves around. And, as we move along, you start to see the world more and more like the backdrop for a modern-day western film.

“You almost start enrolling people in the real world beyond the windows into the narrative. And they have no idea they are part of your own private film.”

Departing from Pyrmont and travelling through the city to the industrial space of White Bay, Passenger features two actors, Jim Russell and Beth Buchanan, playing a random businessman and a woman who appears to simply like a chat. But she has bigger plans.

“The woman is a victim of the ethics of capitalism and she is enacting her revenge on her co-passenger, an unknowing corporate worker,” Wilson says. “She’s just chosen him.

“Our woman on the bus is like the cowboy in a western movie, going into a town where the sheriff is not effective or there’s no law and things have got out of control. We’re using the western, a world which it has its own laws and its own aesthetic, as a metaphor for corporate capitalism.

“She is taking the law into her own hands.”

As the bus journeys, composer Tom Fitzgerald’s original soundtrack, played over a speaker system, shapes the show’s mood and narrative rhythms. Played against the filmic backdrop of the passing world, the windows frame real-life like a movie.

Wilson, who spent six years co-creating Passenger with Pidd, points to French author and philosopher Jean Baudrillard’s words in his 1987 book The Ecstasy of Communication, “The vehicle becomes a bubble, the dashboard a console, and the landscape all around unfolds as a television screen”, as one of her inspirations.

“We are very gently and subtly influencing the way that you see the world outside with music and text and narrative,” Wilson says.

Passenger, which premiered in Melbourne in 2017 and was part of the 2019 Greenwich and Docklands International Festival in London, reaches its unexpected dramatic peak at White Bay before journeying back to Pyrmont, the audience almost hypnotised into seeing the world as a movie.

“After a while, you cannot believe how bizarre real life is if you frame it as a film,” Wilson says. “That stays with you long after the bus journey is over.”

Passenger runs from February 26 to March 8.

Related posts:
02/15/2020 lifestyle Comments Off on Passenger gives the audience a ticket to ride into a real-life western
Recent Posts
We and our partners use cookies on this site to improve our service, perform analytics, personalize advertising, measure advertising performance, and remember website preferences.Ok