It happened this past week … word of the passing of the creator of America’s most ubiquitous casserole. For we learned of the death earlier this month of Dorcas Reilly.

A long-time employee of the home economics department of Campbell Soup, Reilly invented the recipe for the “Green Bean Bake” back in 1955. 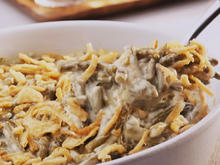 Her combination of green beans, cream of mushroom soup, fried onions and seasonings was a near-instant hit with homemakers of the time, and remains one to this very day.

In fact, Campbell’s predicts some 20 million of her Green Bean Bakes will likely be served at Thanksgiving this year.

As for Dorcas Reilly’s original “bean bake” recipe card, it was donated to the National Inventors Hall of Fame back in 2002.

10/28/2018 lifestyle Comments Off on Passage: Creator of the green bean casserole
Recent Posts