Since 1851, obituaries in The New York Times have been dominated by white men. With Overlooked, we’re adding the stories of remarkable people whose deaths went unreported in The Times.

Isabella Goodwin’s big break came in 1912 when she took a job as a boardinghouse scrubwoman for $6 a week.

She had been hired by the New York City Police Department as a police matron, which mostly meant cleaning jail cells and supervising inmates rather than solving crimes.

But when news of a bank heist made national headlines, vexing police officials, the department asked Goodwin to pose as a maid and infiltrate a seedy boardinghouse. Her mission: Find enough evidence to arrest the suspect, a gangster named Eddie (The Boob) Kinsman who frequented the quarters to see his sweetheart, Swede Annie.

Her information led to Kinsman’s arrest, and the department rewarded Goodwin with a first-grade detective shield, making her its first female detective.

With that, Goodwin became “the best known woman sleuth in the United States,” according to a 1915 Brooklyn Daily Eagle article.

Goodwin’s story might sound familiar to fans of the recent television series “The Alienist,” based on Caleb Carr’s 1994 novel of the same name. In the series, Dakota Fanning plays Sara Howard, a character based on Goodwin, whom Carr learned about from old newspapers in the bowels of the New York Public Library.

“The fact that she turned this matron role into a detective role was very intriguing,” he said in an interview.

Dating back to its formation in the mid-1800s, the New York City Police Department hired women as jail matrons, not officers. In the 1890s, then-police commissioner Theodore Roosevelt expanded the role to include handling female victims and dealing with sex crime cases, as well as matters involving children and babies. But women were still not considered full-fledged officers.

So a woman joining the department “had to take whatever job you could get and then finagle it into something else,” Carr said.

Even before the bank heist, Goodwin had gained prominence for her skill at going undercover, posing as a hapless society lady to expose what she called “fakers” — fortune tellers, supposed healers and other swindlers. She would also pose as a degenerate gambler to help raid female-only betting parlors.

“There is many a 6-foot detective with a gun on his hip who does less valuable work for his $3,300 a year than Mrs. Goodwin, a slight, quick moving little woman whose brain more than keeps pace with her body,” The New York Herald wrote in 1921.

Still, Goodwin and other matrons were doing detective work for $1,000 a year, less than half of what male detectives earned. 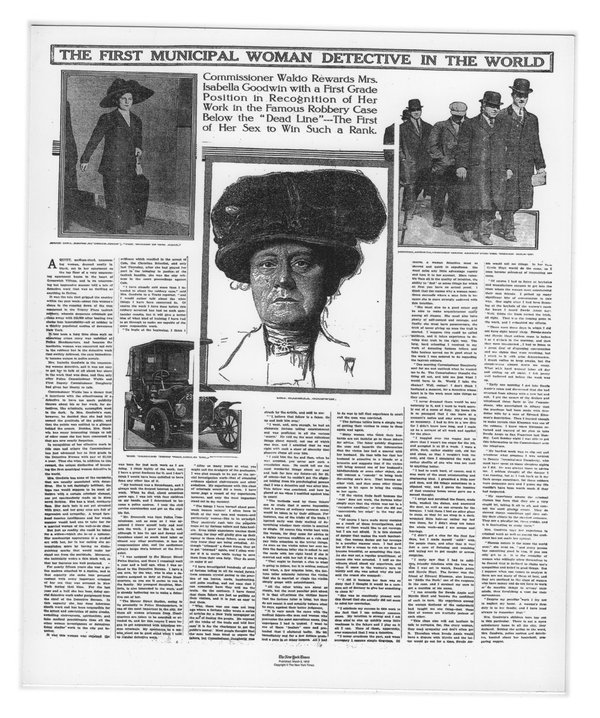 Goodwin was born Isabella Loghry in Manhattan on Feb. 20, 1865, to Anna J. Monteith and James Harvey Loghry, who ran a restaurant and hotel on Canal Street, said Elizabeth Mitchell, author of the 2011 Kindle Single “The Fearless Mrs. Goodwin.” When she was young, she aspired to be an opera singer.

When she was 19, she married John W. Goodwin, a policeman who died in 1896, leaving Goodwin to raise their four children, Mitchell said.

Shortly before he died, the department hired her, as it often did with wives of deceased and ailing officers to help them support their families.

She became invaluable to the department after Kinsman and other thieves were said to have hijacked a cab full of bank workers as they were transferring $25,000 in Lower Manhattan.

The so-called “taxi bandits” eluded scores of detectives and raised concerns about copycat crimes, especially since the department did not yet have a fleet of police cars, said Bernard Whalen, a police lieutenant who has written books on the department’s history.

“Robbers were starting to use cars to make a fast getaway, and we didn’t have the cars to chase them,” he said.

Complicating matters, the sheriff’s office, unhappy with the department’s performance, had proposed arming some civilians and encouraging them to fight crime, Mitchell said.

Then the police got the lead about Kinsman’s frequent boardinghouse visits and turned to Goodwin.

“This was a deep undercover assignment,” Whalen said. “She wasn’t just going in for a couple hours.”

In newspaper interviews, Goodwin would later recall eating scraps and sleeping in “a dark, wretched, little hole.” She listened at keyholes and cozied up to the thieves’ girlfriends to gain incriminating confessions.

She gleaned other telltale signs of Kinsman’s newfound wealth, including information from a shopkeeper who said that Kinsman was “shedding money” like a molting canary.

She knew she had the goods on the crew when she finally heard Swede Annie say that “Eddie the Boob turned the trick alright.”

Police officials swooped in and made the arrests.

Some years later, Goodwin moved to a rooming house in Brooklyn, where she met Oscar A. Seaholm, a neighbor who also happened to be a handsome young singer 30 years her junior. They married in 1921.

In the 1920s, Goodwin helped oversee the newly created Women’s Bureau to handle cases involving prostitutes, runaways, truants and victims of domestic violence, Whalen said. And in 1924, she helped secure several high-profile arrests by working with prosecutors to investigate fraudulent medical practices. She retired that year.

Goodwin died on Oct. 26, 1943, at age 78, from colon cancer. She is buried in Greenwood Cemetery in Brooklyn as Isabella Seaholm.

(Her gravestone lists her birth year as 1871, but census and other records support the 1865 date.)

Today, there are about 6,570 women working in New York City’s 36,500-member police force, or about 18 percent. They include 781 detectives, 753 sergeants and 200 lieutenants, department officials said.

Goodwin once said women made strong detectives because of their ability to “sense things for which at first you have no actual proof.”

“I think that the reason why a woman sometimes succeeds where a man fails is because she is more strongly endowed with this intuition,” she said.

She added that she was proud to “show just what a woman can do when the chance comes her way.”